The US politicians Trump told to 'go home' hit back, and get widespread support - Canary 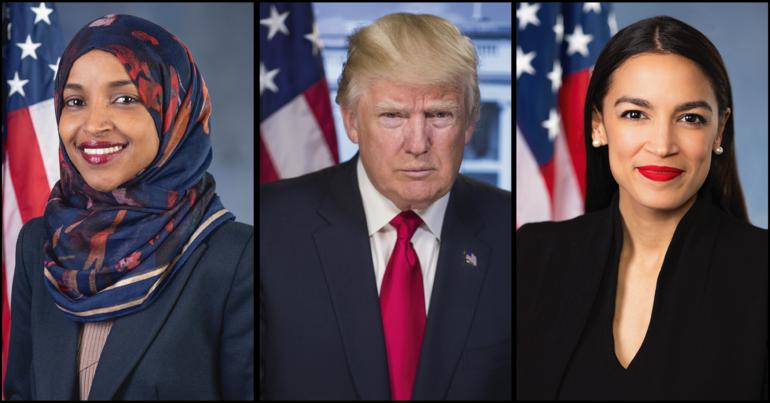 Donald Trump has drawn a lot of criticism for telling four US congresswomen of colour to “go back” to where they came from. The women in question – three of whom were born in the US – aren’t taking this lying down.

Trump tweeted the following on 14 July:

….and viciously telling the people of the United States, the greatest and most powerful Nation on earth, how our government is to be run. Why don’t they go back and help fix the totally broken and crime infested places from which they came. Then come back and show us how….

While Trump did not name the four, he is almost certainly referring to congresswomen Alexandria Ocasio-Cortez of New York, Ilhan Omar of Minnesota, Ayanna Pressley of Massachusetts and Rashida Tlaib of Michigan. Only Omar, from Somalia, is foreign-born.

All of them have responded. Ocasio-Cortez said:

Mr. President, the country I “come from,” & the country we all swear to, is the United States.

But given how you’ve destroyed our border with inhumane camps, all at a benefit to you & the corps who profit off them, you are absolutely right about the corruption laid at your feet. https://t.co/HLKQCotR8T

But you know what’s the rub of it all, Mr. President?

On top of not accepting an America that elected us, you cannot accept that we don’t fear you,either.

You can’t accept that we will call your bluff & offer a positive vision for this country. And that’s what makes you seethe.

As Members of Congress, the only country we swear an oath to is the United States.

Which is why we are fighting to protect it from the worst, most corrupt and inept president we have ever seen. https://t.co/FBygHa2QTt

Pressley had this to say:

THIS is what racism looks like. WE are what democracy looks like. And we’re not going anywhere. Except back to DC to fight for the families you marginalize and vilify everyday. pic.twitter.com/vYzoxCgN0X

And Tlaib spoke out too:

Want a response to a lawless & complete failure of a President?

Many people were crystal clear about what Trump is and what he represents:

Dems, stop trying to court these people. They are poison. https://t.co/lRDOi8OpqA

When I call the president a racist, this is what I'm talking about

We must stand together for justice and dignity towards all. https://t.co/lweeJk7NoF

Saluting these women. Stay pushing. Stay shining. Stay working. Stay a pain in the ass of the #RacistInChief and all his co-horts. Stay true to who you are. Stay safe. Stay together. Stay making us proud. #FourQueens pic.twitter.com/jkcXe6Z96F

One congressman – whose father was born in Ireland – pointed out how blatant Trump is with whom he does/doesn’t single out:

Like some of my Democratic colleagues, I’m young, from an immigrant family, also very critical of Trump. Funny thing though, he never tells me to “go back where I come from.” Hmm I wonder why? 🤔 https://t.co/wdzsKG3Ptm

Trump’s words led #TrumpIsARacist to trend on Twitter. This prompted many people to post tweets similar to this one:

#TrumpIsARacist Y’all are just now figuring this out? Especially when this man built most of his campaign to be anti-POC. pic.twitter.com/MKEiIopoIV

Some argued that several prominent people still haven’t fully woken up to what Trump is, though:

It’s important that we hold Donald Trump accountable for his most recent racist attack on congresswomen Ilhan Omar, Rashida Tlaib, and others.

While doing so, we also need to discuss how Democrats such as Nancy Pelosi are inherently helping Trump. #RacistInChief #TrumpIsARacist pic.twitter.com/JPWN2XY3Q5

America is becoming an increasingly hostile place for women and for people of color. Pelosi’s constant public attacks against the four newly elected women of color aren’t just disrespectful, they’re dangerous… As America grows increasingly brazen in its bigotry, Pelosi should be aggressively standing up for her freshman colleagues, not trying to tear them down. So why isn’t she?

Well, to put it bluntly, I think it’s because she’s terrified of what her progressive colleagues represent. The Squad doesn’t just consist of four people, as Pelosi condescendingly told the Times; it represents the face of a new America. It represents a challenge to the traditional power structure. That doesn’t just scare bigots like [Fox News presenter] Tucker Carlson, it scares the neoliberal establishment.

Trump’s tweet tirade actually recognised that Pelosi also has an issue with the four congresswomen:

….it is done. These places need your help badly, you can’t leave fast enough. I’m sure that Nancy Pelosi would be very happy to quickly work out free travel arrangements!

Pelosi has since criticised Trump’s comments:

I reject @realDonaldTrump’s xenophobic comments meant to divide our nation. Rather than attack Members of Congress, he should work with us for humane immigration policy that reflects American values. Stop the raids – #FamiliesBelongTogether!

But her defence of the women rang hollow with some:

As the congresswomen themselves pointed out, Trump isn’t just saying racist things – he’s actively overseeing racist policy. This video shows the horrendous conditions that detained people are facing as a result of Trumpian border politics:

-no showers for over 40 days.
-lights kept on all night & people sleep on concrete floors.
-complaining of hunger ~ Rep. Jim McGovern

Our brothers. Look at them. Look at how they are begging for help. Putting their hands together "please help us" 😭

THIS IS NOT OK!

This video shows the attitude of vice president Mike Pence towards a similar detainment facility:

This image will go down in history. New video shows shows Mike Pence callously observing and turning his back on severe overcrowding of men in cages at a detainment facility in Texas.

There’s also a question of how British politicians will react to Trump’s latest instance of open bigotry. Channel 4‘s Krishnan Guru-Murthy had this to say:

I’d like to know whether ⁦@BorisJohnson⁩ thinks this is racist pic.twitter.com/Cd6J7yjO7h

Indulging in this sort of racist and ignorant language is nothing new for Trump. The longer he remains in his position, however, the more it becomes normalised. That means standing in solidarity both with the committed congresswomen and with people of colour who have to deal with the real-life impacts of Trump’s actions.