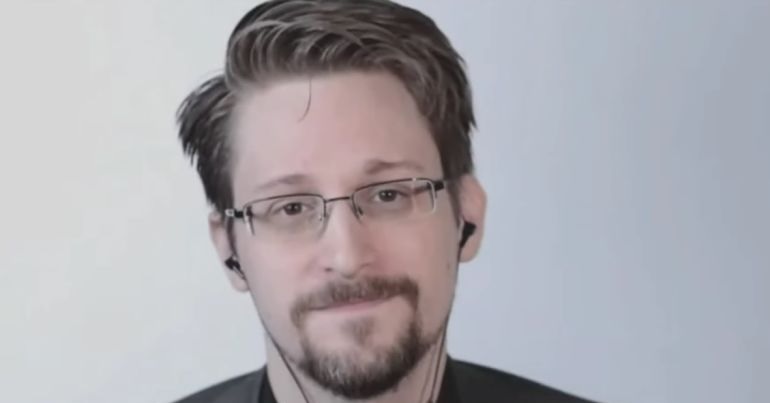 Whistleblower Edward Snowden was the keynote speaker at the Open Rights Group’s (ORG) annual conference on 13 July. During his talk on human rights in the mass surveillance age, Snowden spoke about the difference between ‘left’ and ‘right’ activism.

As he did so, the whistleblower nailed what the “rinky dink” UK government fears most about the left. And it’s right to fear the ‘left’ quality that Snowden identified. Because it’s ultimately what can shield us from the creeping authoritarianism of our governments.

In the session, interviewer Martin Bright asked Snowden about his own political journey. Bright asserted that, as a young man, Snowden was “positioned on the political right”. But since revealing the mass surveillance carried out by both the US, UK, and other allied countries in 2013, Snowden now sits with “liberal activists” and has become “the darling of the political left”, Bright suggested.

Snowden responded, saying the question has presumptions “that don’t entirely hold true”. He stressed that, historically, he wouldn’t have identified as right or left. More so, he was concerned with the “north/south, authoritarian/libertarian” divide. But, in the discussion, he did share his thoughts on activism on the left vs right. Snowden said:

what I have seen as I’ve looked at the space of activism… is that in terms of effectiveness… the ones on the right are less effective.

And I think that’s because people on the left politically… understand the value of collective action much more because of struggles from labour and things like that. Whereas a lot of people on the right, they begin and end with the individual.

Snowden said that’s while it’s valid for people to make “an individual contribution”, given the national and global “scale” of surveillance, people have to “cooperate” to make a difference.

Snowden hit the nail on the head here. Because traditionally the political right is a space that prioritises the individual over the collective. In Britain, Margaret Thatcher’s infamous remark that “there’s no such thing as society” made that crystal clear.

It’s also arguably the mindset that the current governments rely on to ensure there is no collective action over surveillance. The standard response to objections over bulk spying is ‘if you’ve got nothing to hide, you’ve got nothing to fear’. This is, for example, exactly the argument made by Conservative MP Richard Graham in 2015 when the government laid out its legislative plans for a new surveillance law. The message is clear: it’s all about you. If you’re alright Jack, then don’t worry. The notion perpetuates the prioritising of the self over the disabled people, minorities, environmental campaigners, journalists, and whistleblowers that such surveillance can target. The powers that be effectively tell us, when it comes to spying, there really is no such thing as society.

The legislation previously mentioned has since passed into law. ORG’s executive director described it as “the most extreme surveillance laws ever passed in a democracy” at the time.

But, as Snowden discussed at the conference, there’s also a new threat on the horizon.

Although governments have near-universal access to our communications and online activity through surveillance, there’s one area of our technological lives that remains hidden from them. That’s our encrypted communications. The UK government, in particular, has come up with a plan to open these up to its prying eyes. Essentially, it’s proposing that tech companies build a ‘key’ for governments into their products that allow our encrypted emails and messages to be opened by states when necessary.

Snowden, however, says this is “extraordinarily dangerous”; not least because governments cannot be trusted to keep those ‘keys’ secure. As the whistleblower pointed out, the National Security Agency (NSA), the US’ spying agency, “lost their digital arsenal” in recent years. This resulted in a massive cyber-attack on the NHS and multiple other targets. Snowden said:

Who believes that a… country that cannot control its digital arsenal, with a practically unlimited budget, is going to be able protect the key to every communication in the world? Now imagine it’s the little, forgive me for saying so, rinky dink UK government… now imagine it’s… everyone that you don’t like trying to do the same thing. It is a dangerous proposal that will not improve public safety, it will very much harm it.

Snowden also shared with the audience how he believed we can fight back against this ever-encroaching surveillance state. He argued that we should utilise the law where it works in the interest of people rather the powerful. He said we should also protect the technology, such as encryption, that safeguards our human rights. And, he asserted, both of these things should be combined with activism to create a new system of “checks and balances”.

In conclusion, Snowden argued that we protect our rights “in the context of a government that has a diminishing respect for the individual and for the public” by doing the following:

Then, addressing the conference attendees specifically, he said:

Clearly, that’s the key. We have to care, not just about ourselves, but about each other. We have to care about our society. That’s what will give us the motivation and strength to come together and, as a collective, fight for it. No wonder then that society is the very thing our governments are trying to convince us doesn’t exist.