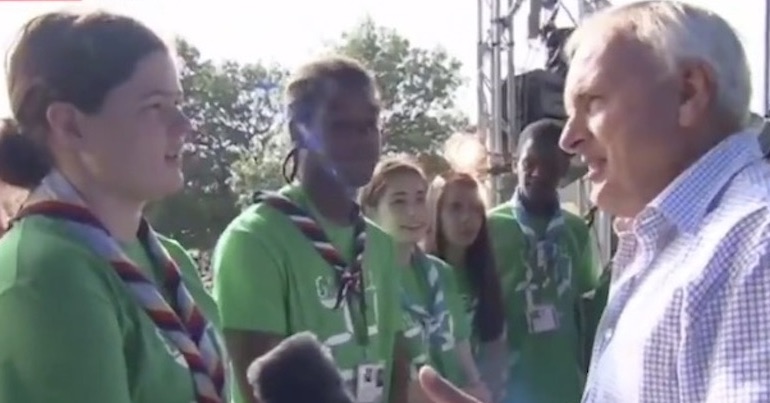 BBC News correspondent Robert Hall quickly made his excuses on 13 July after scouts went way off script at the 100th anniversary of Gilwell Park, the worldwide scouting ‘home’ in Chingford, London.

Midway through the interview, the audience broke into the ‘Oh Jeremy Corbyn’ chant, made famous during the 2017 general election.

The BBC does a article about a celebration of the scouts movement.the crowd starts chanting oh Jeremy Corbyn 😂 pic.twitter.com/IbaoUiuc9a

The chant seems to be somewhat reflective of the mood-at-large in the country. A recent poll from Survation has Corbyn’s Labour six points ahead of the Conservatives. What’s more, Survation was the only polling company to accurately represent the new electoral landscape of the 2017 election. All this suggests that the relentless establishment campaign to smear Corbyn isn’t working.

‘Oh Jeremy Corbyn’: Up and down the country

The scouts are far from the first people to break into the ‘Oh, Jeremy Corbyn’ chant, sung to the tune of White Stripes’ Seven Nation Army. In 2017, festival goers made the chant famous at Glastonbury Festival:

By 2018, the chant reached Bongo’s Bingo in Liverpool:

And at Boardmasters 2018 festival in Cornwall, thousands more people got involved:

On social media, people were very happy with the scouts:

Those scouts on the BBC chanting oh Jeremy Corbyn have made my day!! Never give up hope 🌹#OhJeremyCorbyn pic.twitter.com/N89GiZdyJx

Labour is ahead in the polls, and Scouts at a scout rally singing "oh Jeremy Corbyn" live on BBC Breakfast, what a start to the weekend. https://t.co/8Of88GwGhc

This guy genuinely panics and rushes to cut of the interview short! How ingrained is the BBC bias that even in this scenario they are almost trained to not show anything pro Corbyn! #BBCbias #WeBackCorbyn#GeneralElectionNowhttps://t.co/Vs7LpURQhK

Pro-Corbyn chanting was probably the absolute last thing BBC Breakfast wanted. But the scouts served it up anyway. Fantastic stuff.