While crowds cheer Jeremy Corbyn, they call Boris Johnson a 'w**ker' - The Canary 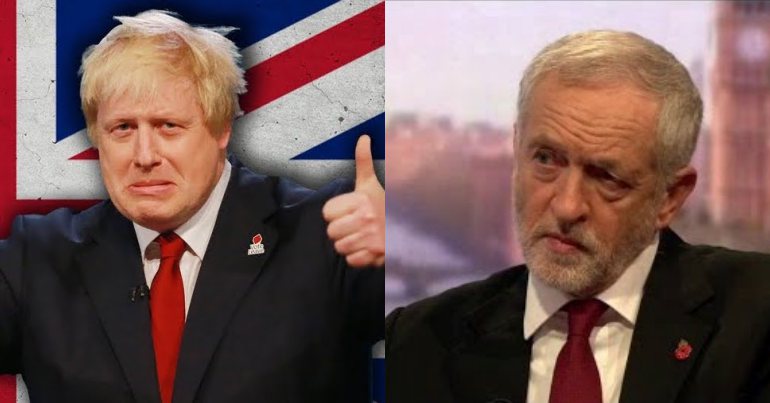 On 29 July, the people of Scotland showed Boris Johnson what they really think of him.

Johnson met Scottish first minister Nicola Sturgeon at Bute House in Edinburgh. A large crowd showed up, but they didn’t cheer the latest prime minister. Instead, they jeered and booed. And a chant of “wanker” went up from some of those gathered:

Boris Johnson greeted with jeers and boos as he arrives at Bute House to meet Nicola Sturgeon. pic.twitter.com/lFnrdJ2mnX

Johnson, meanwhile, tried to usher Sturgeon into Bute House. But she brushed off his patronising gesture:

Boris Johnson arrives at Bute House for his meeting with Nicola Sturgeon, to a chorus of boos from the crowd. @heraldscotland pic.twitter.com/KL2U5enAHi

And it didn’t take long for people to notice that Sturgeon couldn’t even fake the grace and charm she’s managed to present to other Conservative leaders:

It seems the crowd may have actually hit a nerve. Because clearly, Johnson couldn’t face them again and he snuck out of Bute House via the back door:

Boris Johnson has just left Bute House through the back door

Fuckin hell – I didn't even notice the hashtag #BackDoorBoris was already going. My wee heart is bursting with pride at how appropriately Scotland "welcomed" this pathetic, xenophobic numpty.

Man who claims he can negotiate with world leaders runs away from a few people booing him… #BackDoorBoris – a national disgrace and an international embarrassment pic.twitter.com/D5Pq2VYfGH

According to the National, Sturgeon challenged Johnson to a Scottish independence debate during their meeting. After he left, she reportedly called his government “dangerous” and confirmed to reporters that he was the first person to scuttle out of the back door of Bute House:

For clarity, Sturgeon also told reporters that she couldn't think of anyone else choosing to leave by the back door of Bute House following an official engagement, as Johnson did after their meeting

Earlier in the day, Johnson visited the controversial Trident base at Faslane.

On his first visit to Scotland as Prime Minister of the UK, Boris Johnson has chosen to celebrate how much he values the union by visiting Faslane, a high security naval base where the UK's nuclear missiles are controversially stored near millions of Scots. https://t.co/DZ9vF8LVbB

A week is a long time in politics…

In 2015, Johnson met a similar response in Manchester. So people took delight in resharing the clip:

Johnson was back in Manchester on 27 July to give a keynote speech at the Science and Industry Museum. He pledged to fund a high-speed rail link between Manchester and Leeds. But he had to prompt the audience (of around 100 people), saying: [0.01]

Feel free to applaud, if you would.

Boris tour of the UK going along fine:

• Booed in Birmingham
• Hid in a Nuclear Base north of Glasgow
• Booed entering Bute house in Edinburgh
• Leaving, he snuck out the back door like a big cowardie#BackDoorBoris

And people have noticed the total contrast in the way people greet and support Corbyn, compared to Johnson:

Meanwhile, in Manchester, support for Johnson is so poor he has to ask for applause. pic.twitter.com/2WOyn71VMz

In just under a week, Johnson’s led a barrage of hard-right cabinet and government appointments. He’s also promised to push Brexit through, even if this means a No-Deal situation. Indeed, even though more children than ever need to use foodbanks this summer, he’s thrown £100m into ‘No Deal’ adverts.

So the possibility of an ‘Oh Boris Johnson’ chant lifting up festivals and football grounds seems remote, to say the least. And despite what the establishment media may try to want people to think about Corbyn, that says it all really.