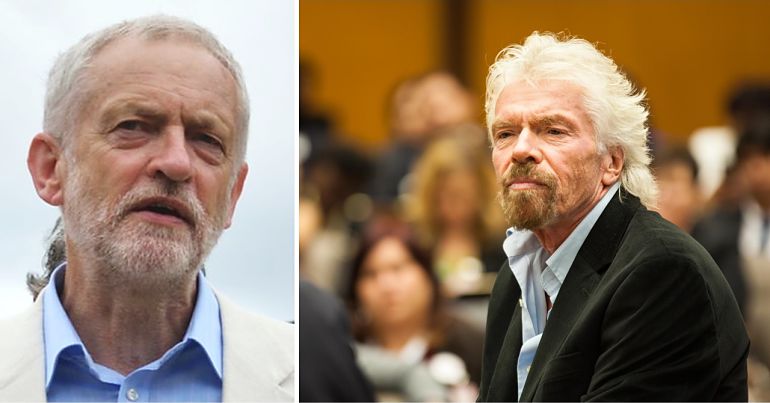 The internet nearly exploded this week when billionaire Richard Branson told Twitter that money doesn’t bring happiness, and love is all we need. People across the world came to remind Branson what money does buy you. And while happiness may not be on the list, it does wipe out the anxiety and unhappiness that financial insecurity can bring. The responses ranged from heartbreaking to hilarious, but Labour leader Jeremy Corbyn’s might just take the biscuit.

I truly believe that ‘stuff’ really does not bring happiness. Family, friends, good health and the satisfaction that comes from making a positive difference are what really matters https://t.co/GFLwOyJLGt pic.twitter.com/r4LbQOcg8J

With a net worth of $4.1bn and his own private island, Branson needs to sit down. Because ‘family, friends, good health and the satisfaction that comes from making a positive difference’ are all imperilled by financial insecurity.

The 2009 book The Spirit Level by Richard Wilkinson and Kate Prickett laid out the “pernicious effects that inequality has on societies: eroding trust, increasing anxiety and illness, encouraging excessive consumption”.

So while money might not buy literal happiness, ‘stuff’ does matter. Access to a quality education matters. Access to nutritious food and clean water matters. An affordable and safe home matters. The absence of any of this ‘stuff’ matters.

Perhaps the most important ‘stuff’ we need is universal access to quality healthcare. And Branson is helping to endanger that access by undermining the NHS.

Branson’s healthcare firm has been granted £2bn of NHS contracts in recent years. And there has been a litany of issues as a result. But the billionaire didn’t stop at just profiting from the privatisation of the NHS. He also recently sued the chronically underfunded NHS for £2m, all because he was refused a contract.

There was a wave of reaction on social media. Most people just could not believe the level of ignorance on display. People currently surviving on foodbanks were not happy to have a billionaire give them a life lesson on the value of friendship.

Richard Branson suing the NHS then telling us that ‘good health’ is what really matters with a picture of him laughing at us is peak Richard Branson. https://t.co/TZMqK8Rxi8

Some thoughts from Richard Branson, whilst on his personal jet, flying to his private island. https://t.co/l8yxgzmg17

this is the same Richard Branson who sued the NHS for millions of pounds of public money, right? https://t.co/4SRz6yYPo4

And then came Corbyn:

Perhaps our NHS could have the money back from when you sued it? https://t.co/MzIQKs2cqZ

The most rattling thing about the Branson blog is not the message. Most people without billions in the bank know their time and energy is best spent on friends, family, and making a positive change. But they also live within the realities of financial insecurity.

Insecure work, exhausting hours and labour, untreated illnesses and conditions, nutritional deficits – these are the realities of poverty. They limit the time available to meet higher needs, and they reduce our capacity to do so in the time leftover. And so a message like this from someone so far removed from that reality lands like a punch to the soul for everyone facing it daily. How refreshing to see a political leader recognise that and call it out for what it is.