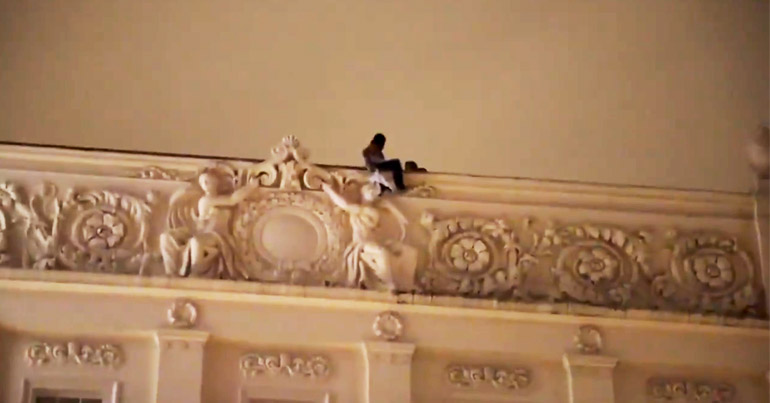 A reporter recently reached the roof of the Bahraini embassy in London, protesting against the execution of two men in Bahrain. But videos then captured the tense moment when staff allegedly attacked the journalist.

Freelance reporter Moosa Abd Ali took to the roof of the Bahrain embassy in London on 26 July. From there, he hung a banner with a message to UK prime minister Boris Johnson:

Activist Moosa AbdAli, @MoosaAkrawi now from the top of the Bahraini embassy in London: I will throw myself if torture victims are executed" #Bahrain pic.twitter.com/GJnU1DP0R6

🔴 Important Video from last night at the Bahraini Embassy in London

— Embassy staffer pulling @MoosaAkrawi from the ledge of the roof of the Embassy building.

And Twitter user realSeifBitar shared a second video from a different angle, claiming embassy staff were trying to “throw… [Ali] off the roof”:

Last Night: Shocking moments when staff at #Bahrain's Embassy in #London about to throw activist @MoosaAkrawi off the roof of the embassy while protesting the execution of 2 civil rights activists

Listen to police telling embassy staff to stop the murderpic.twitter.com/aPJKHsH4gP

Alwadaei’s video shows someone apparently pulling Ali onto the roof immediately after a police officer says into a loudspeaker: “embassy staff… move away from him”. And realSeifBitar’s video shows a police officer saying they “want someone in” the building. A man can be heard yelling on both videos after Ali is pulled onto the roof. They also both show police knocking hard at the embassy door.

Metropolitan Police confirmed to The Canary on 28 July that a man was on the roof on the evening of 26 July and said:

Officers and London Fire Brigade attended. Upon hearing a disturbance on the roof, officers entered the building and detained the man. Security staff were also present. The man… was arrested for trespass on a diplomatic premises. He is currently in police custody.

The Canary also contacted the Bahrain embassy but had no response at the time of publishing. But the Independent reported that a spokesperson said “embassy staff stepped in to restrain [Ali] for his own safety”.

Ali was protesting the execution of Ali al-Arab and Ahmed al-Malali. Bahraini courts convicted the two men in January 2018 of charges including terrorism, killing a police officer, and killing an imam. Amnesty International, however, called their trials “grossly unfair” because the defendants’ confessions were allegedly obtained through torture. Human Rights Watch, meanwhile, said the mass trial involving 60 people was “marred by allegations of torture and serious due process violations”. The US Congress Human Rights Commission also appealed to Bahrain to halt the executions. And UN special rapporteur Agnes Callamard said:

Despite international opposition, state news outlet Bahrain News Agency reported on 27 July that three men were killed by a firing squad. Reuters confirmed these were al-Arab and al-Malali, as well as an unknown third man.

In a press release, BIRDBH said:

Upon arrest, AlArab was ordered to kiss the boot of an officer and, when he refused, was repeatedly beaten. Later that day, he was taken to the prison clinic in a wheelchair. He was then coerced into signing a confession while blindfolded and subject to torture including electric shocks, severe beatings, and the removal of his toenails.

During his arrest, AlMalali was struck by at least two bullets in his hand and had his leg broken. The bullets were only removed 23 days later. He was held incommunicado for a month before being forced to sign a false confession. He was then sentenced in absentia.

It also stated that it “condemns these barbaric extrajudicial executions in the strongest possible terms”.

At the time of publishing, Ali’s last tweet said he would not “stand down” until Johnson called on King Hamad of Bahrain to stop the execution. But it seems the prime minister has yet to make a public statement.