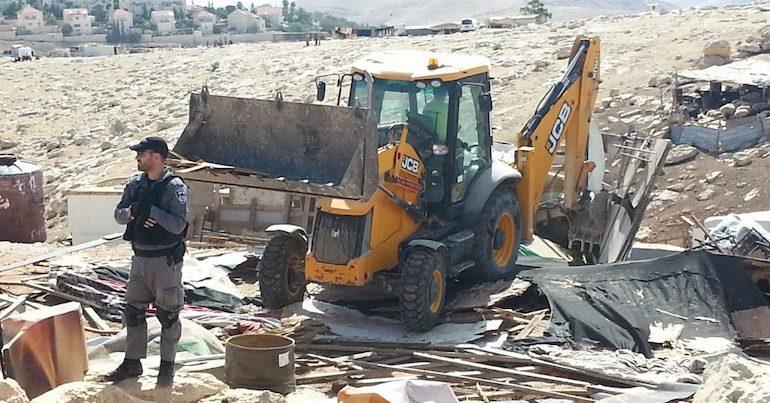 An open letter to JCB and its owners Anthony and Carole Bamford has condemned their role in an ongoing “war crime” in occupied Palestine. Bamford and JCB are also among Boris Johnson’s biggest donors.

The Bamford family has an estimated wealth of £3.6bn. Since 2001, Electoral Commission records show the Bamfords and JCB have given “almost £10m in political donations”, primarily to the Conservative Party and groups “campaigning to leave” the EU. In 2019 alone, Bamford and JCB made “nine separate donations” to Johnson; and in June, these donations totalled £28,000.

The letter calls on the Bamfords to show “concern for justice and human rights worldwide”, and notes:

July marked the anniversary of the 2018 Israeli preparations to destroy the entire village of Khan al Ahmar, in the occupied West Bank.

The planned demolition of Khan al-Ahmar was widely condemned as a war crime. Although “international outcry” halted demolitions, JCB-manufactured bulldozers took part in the “attempted expulsion”. The letter continues:

Israel’s demolition of Palestinian homes carries on almost daily. 461 demolitions were carried out in 2018 in the West Bank alone. They are an integral part of the Israeli State’s repressive military occupation aimed at displacing Palestinian communities and building Israeli settlements in their place.

As The Canary reported, on 22 July three Palestine solidarity activists were found guilty of blockading a UK JCB factory in 2018. They were protesting against the use of JCB machinery in Israel’s ongoing policy of demolishing Palestinian homes, communities and livelihoods. On the same day, Israeli forces started demolishing people’s homes in occupied Palestine. They reportedly used JCB, Hyundai, and Caterpillar machinery during the demolition.

As the letter states, those activists also want the Bamfords to know that “Comasco, JCB’s sole Israeli representative” sells and leases JCB equipment to “the Israeli Civil Administration”. According to Comasco, Israel “clearly prefers JCB” and it dominates the market. This equipment is also used to demolish Palestinian “homes and schools”.

The letter asks for JCB and the Bamfords to “grasp the gravity of the situation in Palestine”. It also notes that:

The planned demolition of Khan Al-Ahmar has been named a war crime by the ICC prosecutor, EU and the United Nations.

The Bamfords could “prevent JCB machinery being used in the Israeli State’s demolition policy”. The signatories urge them to take action to do so.

The letter flags “responsibilities” integral to the UN’s Guiding Principles on Business and Human Rights. The Organisation for Economic Co-operation and Development (OECD) also has stringent “guidelines to ensure human rights compliance and due diligence” within business supply chains. Yet as the letter notes, JCB failed to respond to requests “to comply with these responsibilities” from several “legal and campaign groups”. The groups include War on Want, Lawyers for Palestinian Human Rights, and the Business and Human Rights Resource Centre.

We are concerned that your relationship with Comasco, and your business in Israel in general, are not currently fulfilling these international business human rights guidelines.

It continues to state that, in 2018, JCB products:

were used… in at least 130 demolitions, including the destruction of at least 2 schools and 31 homes. These demolitions displaced 163 people, including 31 children.

Johnson has also appointed members of the secretive TaxPayers’ Alliance (TPA) to key government roles. In 2009, the Guardian reported that a spokesperson said Bamford “helped fund the TPA”. The TPA also ran “a campaign against radicalising schoolbooks published by the Palestinian Authority”.