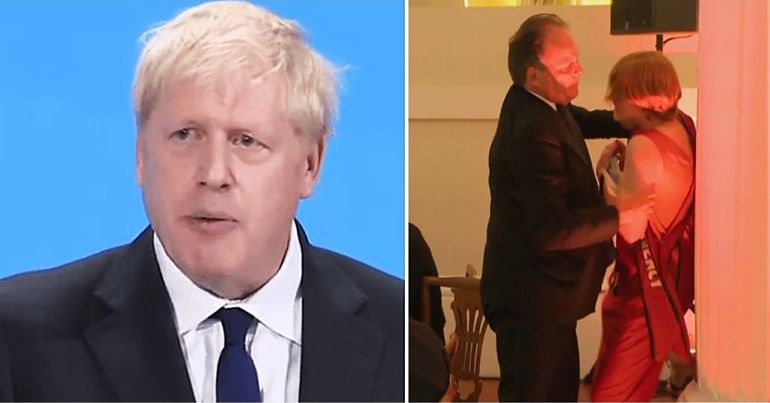 Conservative MP Mark Field attacked a peaceful protester in late June. But just over a month later, new prime minister Boris Johnson has let him off the hook. And for many, Johnson’s inaction shows he “really doesn’t give a hoot about misconduct”.

Letting a thug off the hook

On 20 June, Greenpeace activists interrupted a posh black-tie event in London with a peaceful climate emergency protest. Field grabbed one protester by the neck and shoved her out of the building. For many people, this act represented an elitist disdain for peaceful protesters – particularly from the ruling Conservative Party. And an April letter from Field calling for the police to exercise a “much firmer grip” on climate crisis protests only confirmed this apparent contempt.

As the protester told The Canary:

he grabbed me by the neck and the arm…

When he pushed me against that wall, he would have realised that I wasn’t a threat and that I didn’t have anything on me that was dangerous…

He pushed me hard. I didn’t fall but it felt like he wanted me to. There was a sense he thought ‘I’m better than you, who do you think you are?’…

Do Tories realise that slamming a climate change protestor into a pillar for trying to draw attention to the fact our planet is burning might not be the best look?pic.twitter.com/3OoYRJKZ95

Field later apologised, but said “I felt I needed to act decisively to close down the threat to the safety of those present”.

Johnson has now dropped the government investigation into Field’s conduct. The MP is no longer a minister at the Foreign Office, and a spokesperson for Johnson said:

Mark Field has now left the government. The current PM considers this issue was a matter for the previous PM concerning his conduct during his time as a minister under her appointment

“Johnson really doesn’t give a hoot about misconduct”

Many people saw Johnson letting Field off the hook as an example of just how little the new PM cares about misconduct – especially when men are the aggressors:

This, coupled with the return of Gavin Williamson, Priti Patel and Grant Shapps to cabinet shows that Boris Johnson really doesn’t give a hoot about misconduct.

He cares about personal loyalty to him, and to holding onto his wafer thin majority. https://t.co/uQMVTvrJjr

He hasn't lost his job. Mark Field is still an MP and any man who thinks it is ok to grab a woman like that, isn't fit for not just government but parliament at all.

If parties won’t hold their MPs to account for violence against women then public should be able to. WE are campaigning for Mark Field to be recalled by his constituents for this appalling behaviour https://t.co/24BTq6lz26

Boris Johnson, whose recently had the police stop by to ensure he hadn’t been violent towards his girlfriend, scraps the inquiry into Mark Field pinning a woman to the wall and grabbing her throat. This is how the patriarchy protects itself.https://t.co/4L7BJOxsb2

(Police “attended an alleged altercation” back in June, but reportedly found “no cause for police action”.)

.@LouHaigh: "Never mind not being fit for a job in government, Mark Field isn't fit to be an MP.

“Having previously failed to condemn his actions, this is a test of Boris Johnson's attitude towards women. He should kick him out of the Conservative party immediately." https://t.co/STdHZUXkTh

76% of Johnson’s hard-right cabinet are men, while 64% went to “fee-paying schools”. And considering that Johnson has brought several disgraced politicians into his cabinet, one journalist asked:

How long before Mark Field is back in a ministerial position? Place your bets. pic.twitter.com/vi1vZ98lL4

The aggression of rich and powerful men

Grassroots network Momentum highlighted that Johnson going easy on Field is hardly surprising considering his own past behaviour:

It should be no surprise that Boris Johnson has dropped the inquiry into Mark Field's assault on a climate protester when there's literally a recording of him conspiring with a friend to have a journalist beaten up.https://t.co/BGtsTAy0IV

Boris Johnson is our new Prime Minister.
In case you forgot, here’s a reminder of who he really is… pic.twitter.com/5asly4afwu

This is the phone call Boris Johnson doesn't want you to hear.

His friend, convicted fraudster Darius Guppy, planned to have a journalist beaten up, and Johnson was happy to help.

Is this a man we want as Prime Minister?#ToryLeadershipRace #BorisJohnson pic.twitter.com/GUq9QePTGK

In short, Field getting away with his aggression could well be a sign of things to come under Johnson’s leadership. It should also serve as a stark reminder of just how important it is to get the toxic Tories out of power asap.