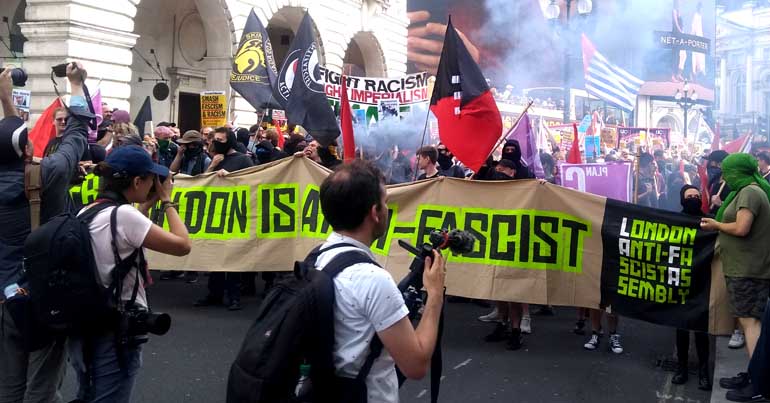 I hadn’t planned to report back on Saturday’s march opposing the ‘Free Tommy’ rally in central London. I attended as an anti-fascist, not as a journalist. But mainstream reporting of the day sorely lacked some key details.

After judges jailed Stephen Yaxley-Lennon (AKA ‘Tommy Robinson’) on 11 July, a Free Tommy event was inevitable. Yaxley-Lennon’s supporters set up two Free Tommy events in London during his prison stretch in 2018. That prison sentence, much like the one he’s currently serving, resulted from Yaxley-Lennon’s broadcast from a court that nearly collapsed a series of grooming gang trials. The English Defence League founder will serve little more than nine weeks in jail because of his 2018 stint on the inside. However, his supporters still took to central London on 3 August under the Free Tommy banner.

Two groups organised demonstrations opposing the Free Tommy event. One was Stand Up To Racism (SUTR), which has close links to the Socialist Workers Party (SWP). This has been a problem for many anti-fascists because the SWP reportedly sided with a senior party figure accused of rape. Anti-fascists have also pointed out that SUTR’s preferred strategy of avoiding direct confrontation with the far right is “totally ineffective”.

The other organising group was London Anti-Fascist Assembly (LAFA), a coalition of independent anti-fascist groups. I turned up to LAFA’s meeting point, the fountain at Piccadilly Circus, at 10.30am. There was some chanting and brief talks while Queercare handed out water, snacks, and earplugs:

We've not tallied the final cost of covering first aid for today's antifa action, but it will certainly be north of £50: we handed out 50 bottles of water, more than 100 sugary snacks, and dealt with several small injuries and mh crises: please help out! https://t.co/63GUnvD5Sm

Oh and we handed out 100s of earplugs to help folk deal with the noise and abuse from police and Nazis. All these things cost money, and donations really do help.

SUTR also arrived at Piccadilly Circus by 11.00am, standing on the other side of the road. The two groups moved off about half an hour later, coming together to march along Regent Street. LAFA headed up the march, notable for its large ‘London is anti-fascist’ banner, while people that turned up as part of SUTR joined at the back. 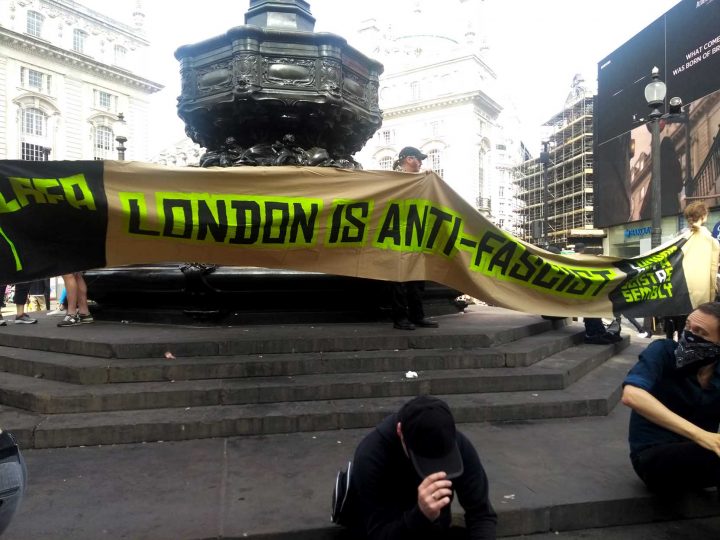 However, mainstream media coverage appeared to sideline the key role that LAFA played. The Guardian, Independent, Mirror, Evening Standard, ITV, Metro, and Daily Mail only named and quoted SUTR. Meanwhile, the Sun barely even mentioned a counter protest. And the BBC didn’t even cover the protests, despite Yaxley-Lennon’s supporters holding their event at the BBC building in Portland Place.

Sarah Dorman, an organiser with sex worker rights group Decrim Now, called Damien Gayle out for the apparent bias on Twitter. Gayle, who co-authored the Guardian‘s report, explained it was the result of not having a reporter present:

Hi Sarah. The article was cobbled together from telephone calls, live-streams and agency copy, I’m afraid. We didn’t have the staff to get down there ourselves.

Gayle also said that SUTR’s “effective media relations operation” meant it got top billing in the news despite what happened on the ground:

The Guardian had two reporters covering the world yesterday, so if you want a mention in the press you’re going to have to at least try to get our attention. @AntiRacismDay have an effective media relations operation, which is why they get covered.

I’m not going to attack Gayle personally for his coverage. Having spent some time writing about hunting and hunt sabotage, I understand how an “effective media relations operation” is helpful for journalists covering grassroots campaigns. But it also exposes the establishment media’s in-built flaws. And it reveals the need for independent media that reflects the voices of those on the frontline of struggle.

I asked LAFA for its point of view on the day’s events. It said:

[LAFA] took to the streets to oppose a group of far-right activists who had come to Central London. Groups from the Anti-Fascist Network (AFN), as well as several anti-fascist and anti-racist groups from other cities and towns, came down to London to support the demo…

The far-right gathering, though protected by police, was repeatedly blocked from moving by the manoeuvring of our bloc of anti-fascists. The far right tried to attack our bloc several times, but were unsuccessful… While no anti-fascists that we know of were arrested, the police’s resources – as is usually the case – were dedicated to kettling our bloc while the far right ran wild. Despite antagonism from the police, including the use of police horses, the anti-fascist bloc maintained its discipline, kept together and stayed focused on blocking the far right. When the far right attempt to mobilise in London, we will oppose them. We will not stand by as they attempt to spread their messages of hatred and division. LONDON IS ANTI-FASCIST!

After leaving Piccadilly Circus, the LAFA-led march faced police lines attempting to redirect it away from the Free Tommy event. It rerouted past Hanover Square before coming into contact with roaming Tommy supporters at Cavendish Square. Despite one such supporter charging into the anti-fascist march, there didn’t appear to me to be any attacks. At this point, some pushing broke out between the march and the police but it quickly died down.

However, LAFA told me that:

police pushed a female anti-fascist protester into the far-right demo, seriously endangering her safety. There was also one police officer in particular who went to attack stationary protesters who were on a path with no prior warning. He had his baton ready to go and was pushing protesters to the ground. This resulted in folks including our stewards asking him to chill out and question him as to what on earth he thought he was doing.

While we were at Cavendish Square, an anti-hunting ‘Stop the Cubbing’ march was gathering in the park. Attendees at this march, who included families with children, told me that several Tommy supporters shot verbal abuse at them. Thankfully, contrary to an earlier report by Hope Not Hate, nobody was attacked. 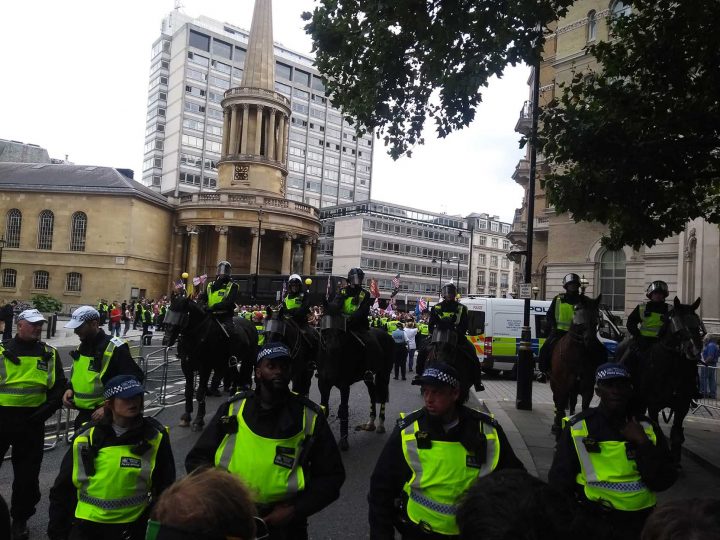 LAFA’s march reached the corner of Portland Place, outside the Langham Hotel, metres from the BBC building. It remained there with police officers on foot, on horseback, and in vans tightly circling the protest. Dozens of Yaxley-Lennon’s supporters were unaccompanied by police, at one point circling around the BBC building and attempting to approach the counter-protest from behind. A police line eventually stopped them.

The two demos dispersed around 3.15pm, with those from the Free Tommy event going on to abuse the public throughout central London:

Here’s some pictures of when Tommy Robinson supporters surrounded a car with two Muslim occupants and started harassing them on Whitehall. pic.twitter.com/uzmN554NSo

Grassroots anti-fascism is essential to halting the spread of racism, nationalism, and other forms of oppression. LAFA is an inclusive, flexible, and anti-authoritarian network that can empower people. But SUTR is ineffective at best and hugely problematic at worst. However, the structure of mainstream media means SUTR’s slick PR machine gained it the media’s spotlight.

This does not excuse inaccurate reporting. Also, you’re comparing a large well-funded organisation against an unfunded grassroots coalition of antifascist groups. We’re not complaining for lack of coverage, we just object to the inaccuracies.

That’s why media willing to platform the voices of those who otherwise go unheard remains utterly essential.