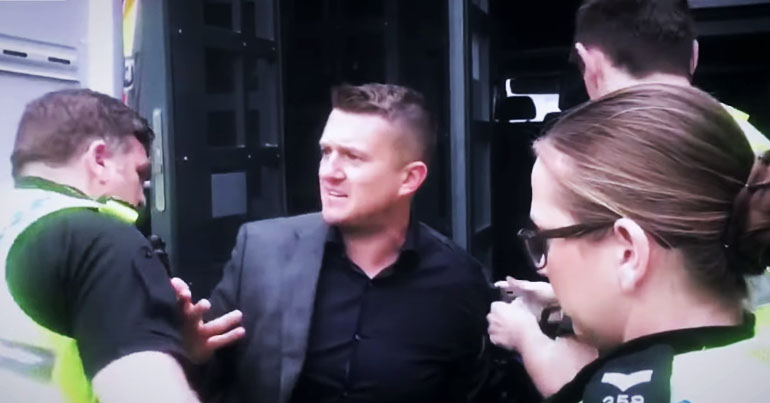 Dame Victoria Sharp gave Stephen Yaxley-Lennon (aka Tommy Robinson) a nine-month prison sentence on 11 July. In reality, the far-right figure will actually serve barely a quarter of that. And the outcome is likely to be a massive boost to Yaxley-Lennon’s popularity and finances for his ’cause’.

Sharp said jail time is the only thing that would “properly reflect the gravity” of Yaxley-Lennon’s conduct. Judges found him guilty of contempt of court on 5 July for broadcasting during a series of grooming gang trials in May 2018. The trials could have collapsed as a result. He was also on a suspended sentence for a similar charge at the time of broadcasting.

Despite this, Yaxley-Lennon insisted to Sky News as he arrived at his sentencing that he was being jailed “for doing what you [journalists] do”. He also wore a T-shirt that read “convicted of journalism” and “Britain = North Korea”.

Although he received a nine-month sentence, Yaxley-Lennon will only serve 9.5 weeks in jail as a result of time already served.

Yaxley-Lennon has previously made a public show of trying to avoid jail. But the Independent reported on 10 July that he’d described the prison sentence as a “win”. The paper said that, in a video filmed before sentencing, Yaxley-Lennon claimed:

I genuinely believe that the best thing they can do for our cause is send me to jail.

You’ve added more support for me and for my cause… Depending what decision you make on Thursday, my support will be stronger than ever… either way I win.

And Yaxley-Lennon’s previous run-ins with the law appear to confirm that, at least financially. The Independent reported on the day of his 2018 release that Yaxley-Lennon had received tens of thousands in donations during his jail time. And the Times reported in October 2018, just months after Yaxley-Lennon had left prison, that he’d “recently moved into a £950,000 house in an upmarket village in Bedfordshire”.

The Canary reported in August 2018 that Yaxley-Lennon’s former assistant admitted how lucrative his ‘platform’ is. Lucy Brown said that:

It’s just about getting [YouTube] views and retweets. This is a business and… outrage, valid as it is, will be monetised as such.

As anti-fascist podcast 12 Rules for WHAT pointed out, he’s built a cult of personality that’s rare for the far right in Britain. Usually, the far right operates in groups and organisations. As a result, through “very personalised touches” in his public persona, he’s able to create a “very intense bond” with supporters.

Prison, then, is an opportunity for Yaxley-Lennon to once more become a martyr for his cause. It will entrench his supporters’ beliefs in him even deeper. And sending donations is one of the biggest ways they will show their support. A 9.5-week prison sentence is a small price to pay for the boost it will give to Yaxley-Lennon’s popularity and bank account.