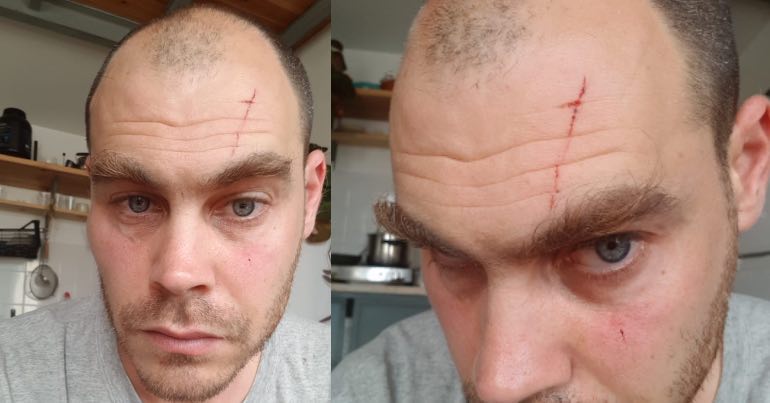 A left-wing Israeli activist has been injured in a knife attack. Jonathan Pollak, a longtime pro-Palestine and Boycott, Divestment, Sanctions (BDS) activist, was attacked by two people who called him a “leftist asshole”. A right-wing Israeli group had previously targeted him for his support of Palestinian rights.

In an interview, Pollak said he left work on 7 July and noticed he was being followed. At first, he believed it was the police who were following him because they wanted to issue him with a warrant. As he revealed:

I tried to run but they caught up to me, pushed me to the ground and began punching and kicking me

At one stage, he tried to defend himself. But one of the attackers “pulled out a knife and slit my face”. And as they left, they called him a “leftist asshole”.

Anti-occupation activist Jonathan Pollak was just assaulted by two men in Tel Aviv. One pulled out a knife and inflicted shallow injuries to his face & arms. This was clearly politically motivated. My guess: result of far right group @adkanorg incitement campaign against Pollak. pic.twitter.com/Ws3PpviYNL

Pollack has previously criticised what he calls Israel’s “military dictatorship” for restricting “all basic democratic rights” for people in occupied Palestinian territories and treating Palestinians as “second-class citizens” in Israel.

Pollak divulged that he suffered cuts to his face and arms. His assailants also punched him in his face and ribs.

Many people have since expressed their horror at the attack. A Nation journalist argued that the attack was the price a person pays for having “principles in Israel today”:

Jonathan Pollak is one of the bravest and most principled people I know. The price of principles in Israel today: https://t.co/1nZLbl8IEa

Several people, meanwhile, described it as a “politically motivated attack”:

Long time pro-Palestinian activist Jonathan Pollak attacked with a knife in broad daylight in Tel Aviv and verbally abused as a "leftist", this was clearly a politically motivated attack pic.twitter.com/Xsr8Dg4oEw

One Twitter user pointed out that a right-wing Israeli group had recently doxxed Pollak:

Haaretz employee Jonathan Pollak says information about where he lives and works were posted online before the attack outside the publication's offices https://t.co/Fo0nq7YTyp

The group, ‘Ad Kan’, has previously tried to infiltrate human rights movements. It has also attempted to prosecute Pollak and other Israelis “for participating in protests against the West Bank separation barrier”. It had apparently earlier posted details of where Pollak works as well as his home address:

A spokesperson for @adkanorg is quoted in the Jpost denying that the organisation released personal details about Pollak. This is completely contradicted by publicly available facts. Screenshots follow. https://t.co/GTksQebbuL

Ad Kan denied responsibility for the attack, saying it “denounces all violent actions”. And Pollak himself said he doesn’t know who attacked him.

As horrific as the attack may be, it isn’t surprising. Left-wing activists in Israel have historically had a difficult time in the state. Politicians, including current prime minister Benjamin Netanyahu, have previously accused leftists of having “forgotten what it means to be Jewish”.

In the recent general elections, meanwhile, the hard right came out victorious. The Israeli population gave the most extreme elements of the far right a mandate. And this puts left-wing activists in an even more dangerous position than before.