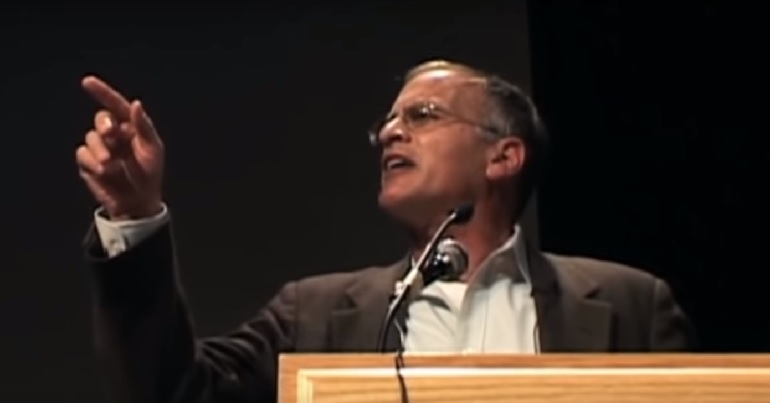 The following content speaks of genocide and may cause distress to some readers.

Renowned Jewish author Norman Finkelstein is an outspoken critic of Israel. And in one famous video, he explains exactly why he won’t be silent about Israeli crimes against Palestinian people.

After a speech Finkelstein made, he faced hostility from Israel apologists, who called his words offensive. But his response was as powerful as it was damning. He said:

I don’t like to play, before an audience, the Holocaust card… Now I feel compelled to… My late father was in Auschwitz; my late mother was in Majdanek concentration camp… Every single member of my family on both sides was exterminated. Both of my parents were in the Warsaw ghetto uprising. And it’s precisely and exactly because of the lessons my parents taught me, and my two siblings, that I will not be silent when Israel commits its crimes against the Palestinians. And I consider nothing more despicable than to use their suffering and their martyrdom to try to justify the torture, the brutalisation, the demolition of homes, that Israel daily commits against the Palestinians.

The silencing of Israel’s critics

There are many Jewish critics of Israeli crimes. But as award-winning Israeli journalist Gideon Levy said recently, there has been a “systematic campaign” to “blackmail… anyone who dares to criticise Israel” with accusations of antisemitism. In the UK, this campaign has primarily targeted Labour Party leader and veteran anti-racist Jeremy Corbyn.

During one of the first anti-Corbyn offensives in 2016, Finkelstein said:

It’s time to put a stop to this periodic charade, because it ends up besmirching the victims of the Nazi holocaust, diverting from the real suffering of the Palestinian people, and poisoning relations between the Jewish and Muslim communities… there has to be a decisive repudiation of this political blackmail.

Amid the latest offensive, he has also been outspoken:

Fellow Jewish academic Noam Chomsky, meanwhile, has called the smear campaign “an insult to the memory of the victims of the Holocaust”.

“”Never again” must mean NEVER AGAIN FOR ANYONE!”

Israeli human rights organisation B’Tselem reports (at the time of writing) that, between 19 January 2009 and 31 May 2019, Israelis killed 3,534 Palestinians. In the same period, Palestinians killed 191 Israelis.

During Israel’s 2014 bombing campaign in Gaza – which reportedly killed at least 1,483 Palestinian civilians, 327 Holocaust survivors and their descendants wrote an open letter calling Israel’s treatment of Palestinians an “ongoing genocide”:

Genocide begins with the silence of the world…

“Never again” must mean NEVER AGAIN FOR ANYONE!

For precisely that reason, Jewish left-wingers like Finkelstein refuse to remain silent about Israel’s crimes. And so should we.