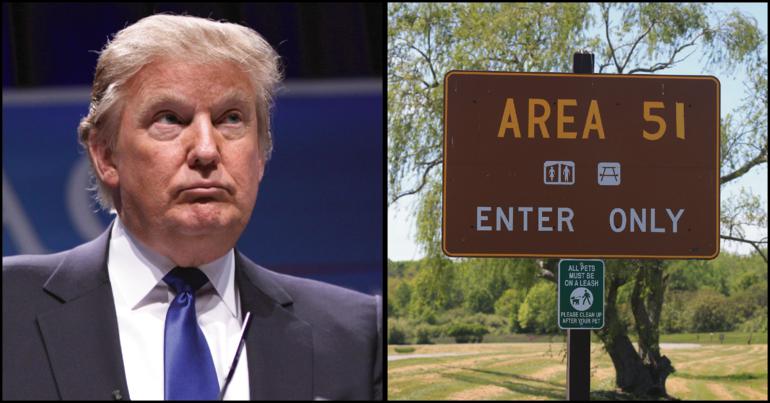 For years, conspiracy theorists have speculated that  US military base Area 51 houses aliens and UFOs. In 2019, a man launched a plan to “storm” the installation. While the man in question has said it’s all a “joke”, it’s not clear if the 400,000 attendees and counting realise that. Still – as long as it never actually happens – the memes it’s producing are out of this world.

The aliens at Area 51 waiting on that “we outside” text 💀 pic.twitter.com/HJECAOdgp6

Area 51 is a military installation run by the US air force in Nevada. It came to the public’s attention in 1989 when Bob Lazar claimed to have “worked on extraterrestrial technology” and seen “autopsy photographs of aliens”. Lazar has made many other outlandish claims in his life – many of which have been disproven.

One popular theory is that Area 51 housed a UFO that crashed in Roswell, New Mexico. The Roswell event actually happened in 1947, but the idea that it was a “flying saucer” crash was disproven at the time.

One man with access to the truth is President Trump. In a recent interview, Fox News host Tucker Carlson said  he’d spoken to an official who claimed the US government had UFO “wreckage”. Trump answered:

I haven’t heard that… It has not been within government… a big thing… but I’ve seen it… on your show. … I don’t assume it’s correct, but – you know – I have an open mind, Tucker… Nowadays you can believe anything, right?

The Facebook event is titled Storm Area 51, They Can’t Stop All of Us. The fact it’s generated such interest shows that the myths behind Area 51 still capture people’s attention. Referencing the Japanese anime Naruto, the event proposes:

We will all meet up at the Area 51 Alien Center tourist attraction and coordinate our entry. If we naruto run, we can move faster than their bullets. Lets see them aliens.

A person claiming to have organised the event wrote this:

Hello US government, this is a joke, and I do not actually intend to go ahead with this plan. I’m not responsible if people decide to actually storm area (sic) 51.

Given the state of the world, they’re smart to presume people might just show up anyway. They’ve already been showing up for the memes after all:

When the alien I stole from Area 51 gets into my stash of edibles and shows up into my room to tell me he threw up pic.twitter.com/XTZhOmiGaU

Me explaining to my
mom why I need
plane tickets to go
to storm Area 51 My mom: pic.twitter.com/wF17gZkZQk

Some predicted a brush with the law:

Me pretending to be a janitor when I get caught red handed in the Area 51 hallway pic.twitter.com/0xtq8RM6Qv

Others predicted the event could turn into a bit of a circus:

Us walking out of Area 51 with no aliens pic.twitter.com/7J543zMKXM

Some anticipated the response from a different kind of alien:

Everyone after leaving Area 51 pic.twitter.com/PFp3cEHlVE

And running with the theme of video games, another person predicted the attendees would be no match for modern warfare:

1 min into the Area 51 raid * pic.twitter.com/aBrj8DNXyY

Is Area 51 likely to house aliens or UFOs? Probably not. Because if anyone would have blabbed about their existence, it’s President Trump.