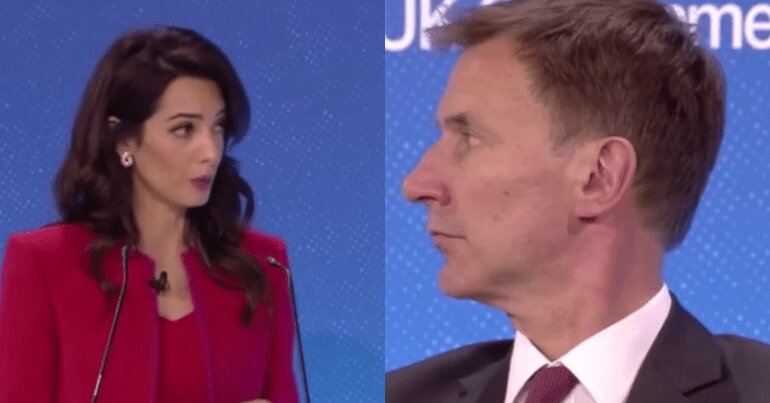 Journalists who expose abuses face arrest, while those who commit the abuses do so with impunity… these problems are global

Shortly after, she continued:

the indictment against WikiLeaks founder Julian Assange has alarmed journalists at newspapers around the world, including the New York Times, the Washington Post, the Wall Street Journal, and the Guardian because, as the editor of the Washington Post has put it, it… ‘criminalises common practices in journalism that have long served the public interest’.

As Washington Post executive editor Martin Baron has said, the indictment against Assange criminalises “common practices in journalism”, which are related to source protection and story hunting.

Yet Conservative leadership contender Hunt, who was sitting across from Clooney, recently said he would hand Julian Assange over to the US, provided he passes through the legal system. And he is foreign secretary in a government persecuting not just Assange, but journalists such as Barry McCaffrey and Trevor Birney. As Clooney said, these men were:

recently arrested for using a leaked ombudsman report in a documentary alleging police collusion in a murder in Northern Ireland during the Troubles.

“Serious violations of his human rights”

On top of the media freedom issue, UN special rapporteur on torture Nils Melzer warned in May that Assange faces a:

real risk of serious violations of his human rights, including his freedom of expression, his right to a fair trial and the prohibition of torture and other cruel, inhuman or degrading treatment or punishment.

In the US, the authorities can invoke the Classified Information Procedures Act (CIPA), which means Assange would face a secret trial with no jury.

“Making speeches is not enough”

Clooney also linked the WikiLeaks indictment into a wider picture on journalism:

All governments say they support press freedom; the right is even enshrined in North Korea’s constitution. What matters is enforcement of that right. And enforcement depends on states. So I am grateful to the foreign secretary Jeremy Hunt… for bringing us all here today… But my message to all the ministers who are here is that signing pledges and making speeches is not enough. They must make sure that their laws respect media freedom, and that their police, prosecutors, judges, and citizens do the same.

Under Jeremy Corbyn, the Labour Party is calling for the Conservative government to end its persecution of Assange. At the time of Assange’s arrest in April 2019, shadow home secretary Diane Abbott said:

Julian Assange is not being pursued to protect US national security. He is being pursued because he has exposed wrongdoing by US administrations and their military forces.

Clooney actually brought universal values to the Foreign Office’s media freedom event. It was a breath of fresh air at what has mostly otherwise felt like an Orwellian nightmare. And Hunt did not look happy.