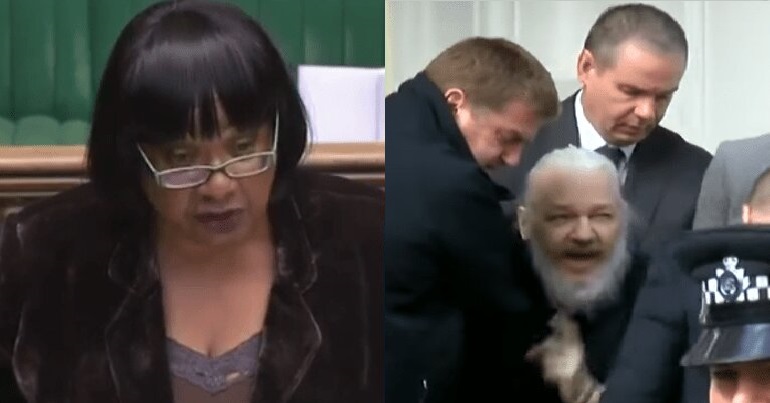 On 11 April, shadow home secretary Diane Abbott delivered a speech on Julian Assange. And it proves the Labour Party is now on the right side of history.

Pursued “because he has exposed wrongdoing”

Responding to a statement from her Conservative counterpart, Sajid Javid, Abbott said:

Julian Assange is not being pursued to protect US national security. He is being pursued because he has exposed wrongdoing by US administrations and their military forces.

The extradition of Julian Assange to the US for exposing evidence of atrocities in Iraq and Afghanistan should be opposed by the British government.

In the Commons, Abbott was explicit about what Assange’s arrest is really about, saying that WikiLeaks‘ disclosures on:

illegal wars, mass murder, murder of civilians and corruption on a grand scale… [have] put Julian Assange in the crosshairs of the US administration. It is for this reason that they have once more issued an extradition warrant against Mr Assange.

In other words, Labour is standing on the side of international law and the UN rather than that of the US. As Abbott noted:

In February 2016, the UN panel ruled in his favour, stating that he had been arbitrarily detained and should be allowed to walk free and [be] compensated for his deprivation of liberty… But the foreign office responded by saying this ruling changes nothing.

Recently, the UN’s Working Group on Arbitrary Detention reiterated its ruling that the UK government was ‘arbitrarily detaining’ Assange and again demanded that the authorities allow him to leave. The Conservative administration tried to appeal the UN ruling but failed.

Abbott also pointed out something revealing about the foreign office’s previously take on Assange’s situation. She suggested it’s because the Conservatives are predominantly concerned about UK relations with the US:

I note it was the foreign office that responded, not the home office or the ministry of justice. The foreign office has no responsibility for imprisonment and extradition in this country. But it is of course interested in relations with allies and others.

The shadow home secretary then noted some examples of WikiLeaks reporting:

And we should recall what WikiLeaks actually disclosed. Who can forget the Pentagon video footage… in Iraq which killed 18 civilians and two Reuters journalists? It is the monumental amount of leaks such as this that lifted the veil on US-led military operations in a variety of theatres, none of which has produced a favourable outcome [for] the people of those countries.

One revelation from the ‘Iraq war logs’ was that the US military indiscriminately killed over a dozen people in Baghdad, including two Reuters media staff. The documents also showed that US and UK officials lied about having no official statistics on deaths. And the leak identified over 66,000 civilian deaths from 2004 to the end of 2009.

Aside from a breach of bail (see a timeline of his case here), Assange’s arrest concerns an extradition request from the US. The now unsealed indictment alleges that Assange is guilty of ‘conspiring to commit computer intrusion’. It claims that Assange helped whistleblower Chelsea Manning crack a password in order to make it more difficult to identify her as the source of the Iraq and Afghanistan war logs.

Right side of history

Rounding off, Abbott said that Assange is at risk because he has exposed wrongdoing that is in the “utmost public interest”. And she said that Labour would be “very concerned” if the UK extradited Assange to the US on the basis of his revelations.

It’s important to note that Abbott’s response marks a historic break from Blairism. The right wing of Labour is all too keen to join the Conservatives in sucking up to the US. But Abbott just proved Corbyn’s Labour is a government really worth fighting for.