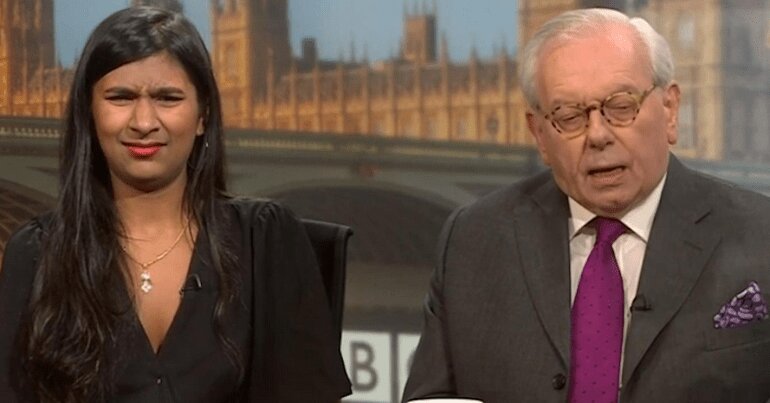 Novara Media senior editor Ash Sarkar shut down historian David Starkey on 12 April. Starkey had accused Jeremy Corbyn of siding with Julian Assange, who the history presenter described as an ‘enemy of Britain’.

Responding to the US extradition request, Corbyn said:

The extradition of Julian Assange to the US for exposing evidence of atrocities in Iraq and Afghanistan should be opposed by the British government.

On BBC Politics Live, Starkey attacked Corbyn for this response.

But Sarkar wasn’t having it:

“Undoubtedly in public interest for us to know what is being done in our names” @AyoCaesar on wikileaks videos#politicslive https://t.co/q7G5GBPZfk pic.twitter.com/3Tg7YwXX6l

“Shining a light on wrongdoing”

In the BBC studio, Starkey argued:

I find, again, the tweet from Corbyn shameful. Here is a man who invariably sides with the enemies of Britain… the only outrages he’s interested in are a tiny little fragment that suit his political agenda.

Shouldn’t we as British citizens be holding our own government to account?… I remember… seeing civilians being shot down as though it’s a video game and I remember the disgust that I felt at that moment in time. It was undoubtedly in the public interest for us to know what is being done in our names. That’s why Jeremy Corbyn is correct to speak on it. And that’s why all of us should be able to separate our personal feelings for Julian Assange from the legal process that he is now facing for shining a light on that wrongdoing.

I’m afraid modern war is horrible. And there’s no point in pretending that it’s anything else. There are invariably civilian casualties. And the attempt in pretending there can’t be is silly…

But this seems to be a confused attack on Assange. Because it was WikiLeaks who revealed that the US and UK lied about having no official statistics on deaths, including civilian casualties. The Iraq war logs identified over 66,000 civilian deaths from 2004 to the end of 2009. And as Sarkar pointed out, WikiLeaks also revealed that the US military indiscriminately gunned down over a dozen people in Baghdad, “including two Reuters media staff”. So the reality is the opposite of Starkey’s assertions. Governments were pretending that there was less bloodshed as a result of their invasion and WikiLeaks revealed that to be false.

David Starkey just made himself ridiculous by stating that @jeremycorbyn hates Britain. He loves Britain so much he wants it at peace, it's people fed, housed, educated, well paid and provided with universal healthcare! #PoliticsLive

"Look at Corbyn's record on the IRA and terrorism," says David Starkey. Okay. .@jeremycorbyn was one of the .@UKLabour politicians who helped bring about the Good Friday Agreement and end the "Troubles" in Northern Ireland. That's a pretty good record! #PoliticsLive

It did look like Starkey was simply spouting off his own out-of-touch inclinations. Thank god Sarkar was there to set the record straight. Because the US empire’s persecution of Assange is an attack on our right to know crucial information about our governments.