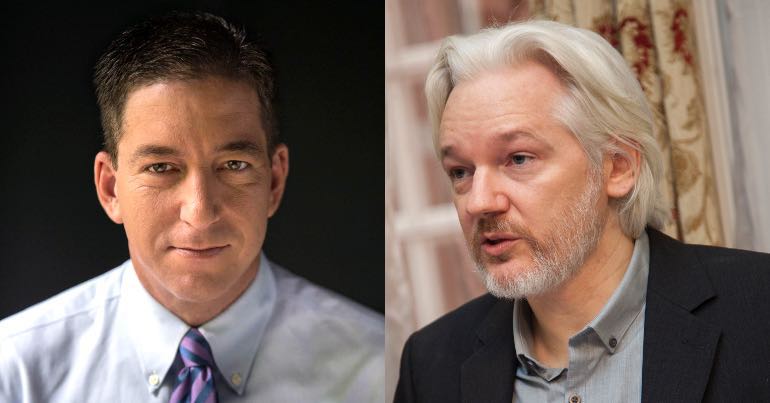 Julian Assange has been arrested by the Met Police. Police entered the Ecuadorian embassy after its government withdrew his asylum. Journalists filmed Assange being carried outside by police. Assange had been in the embassy since 2012 after gaining diplomatic asylum.

Under his leadership, WikiLeaks released the Collateral Murder video which shows a US Apache helicopter crew killing civilians and journalists. And now, the US government has asked that Assange be extradited to the US because of this and other similar leaks published by WikiLeaks. All of this, as Glenn Greenwald has noted, clearly puts journalists at risk.

Reaction to the arrest

WikiLeaks quickly broke the news to the world that police had arrested Assange. It also pointed out that he had made many enemies by publishing information that governments wanted to be kept secret.

As news of his arrest spread on social media, many people reacted with disbelief and anger. Yanis Varoufakis, the former Greek finance minister, said Assange was being unfairly persecuted:

Julian is in custody for breaching bail conditions imposed over a warrant that was… rescinded. Anyone else would be fined & released. Except that JA's persecution is all about challenging our right to know about the crimes governments commit in our name.https://t.co/7duQodMPlt

Ryan Grim of the Intercept, meanwhile, wrote that Assange’s arrest “is a real test for the American media”. And Jeremy Scahill, also of the Intercept, declared that the arrest was “an assault on journalism”, insisting:

The continued imprisonment of @xychelsea is an utter disgrace. The arrest of Julian Assange represents an extremely dangerous crossing of the rubicon. This is an assault on journalism and a free press. All journalists should stand in fierce opposition.

But it was their Intercept colleague Glenn Greenwald who really nailed the dangerous precedent of Assange’s arrest.

Greenwald on Assange and the future of journalism

The award-winning journalist called on some people in the media to “take a hard look in the mirror”.

If you're a US media star who has spent 2 years claiming to be so concerned about press freedoms over Trump's mean tweets about your friends, but don't raise your voice in protest over this grave attack on press freedom, take a hard look in the mirror https://t.co/b32TZ7vatx

He also said it was “fascinating” watching journalists from the New York Times celebrate Assange’s arrest:

Watching NYT reporters cheer Trump DOJ for indicting Assange is fascinating for so many reasons. Leaving aside the falsehoods in this tweet, the NYT implemented a system to allow stolen materials to be delivered to it without the thief getting caught. It actively aids stealing: https://t.co/77LvrBl8Qt

But this is something he has seen before:

As I saw during Snowden, many US reporters instinctively side with DOJ & cheer efforts to criminalize transparency. It's so bizarre. But here NYT's @ScottShaneNYT explains to his colleague that the Assange indictment includes much of what NYT reporters do https://t.co/mzzkPwKg4H

And he believes jealousy explains this reaction:

There is so much driving the hatred many journalists harbor for Assange. But a huge part of it is professional jealousy: WikiLeaks broke more massive stories than most of these reporters will ever get close to in their lives, all without joining their insular journalism club.

As a result, he feels “sick” seeing some journalists support the Trump administration’s persecution of Assange:

"Journalists" who unite behind the Trump DOJ as they criminalize core functions of investigative journalism make me sick. Even more so, people like you who do that are the absolute last people with the credibility to determine who is & isn't a journalist https://t.co/31WfYg7zrC

Greenwald also took aim at the Huffington Post’s White House correspondent, S.V. Dáte, in particular. Dáte has claimed that Assange is not a journalist and is instead “an ally of Vladimir Putin”. Because of this, Greenwald accused Dáte of “helping” the Trump administration:

You're helping the Trump DOJ by cheering for and justifying indictments of someone for activities that are core investigative journalism. That is not what journalists do. You are a servant of Trump and his DOJ. He's not a friend of journalists: https://t.co/dGX6qWOl5u

Given Dáte’s comments, and pulling no punches, he argued that Dáte was “mindlessly repeating” US propaganda:

Making up shit and mindlessly repeating what Trump's CIA Director claims – like you just did – is the literal opposite of journalism. You're extremely patriotic and supportive of the Trump DOJ, which is sweet. You are the last person qualified to say who is & isn't a journalist.

Greenwald also acknowledged that there are some journalists who understand the danger we are all in. And this means we have to set aside our personal feelings about WikiLeaks. He argued, for example, that even Micah Lee – someone with “contempt for Julian personally & politically” – appreciates the “dangerous precedent” of Assange’s indictment.

He also drew attention to other journalists who understand “the serious dangers to press freedoms” that Assange’s arrest represents:

It's good to see at least some journalists recognizing the serious dangers to press freedoms posed by the DOJ's indictment of Assange. Here's MSNBC's @AriMelber explaining why the precedent is menacing to journalism: pic.twitter.com/vg4yRf6A1J

Greenwald is right to point to the danger that Assange’s UK arrest poses for journalists. The fact that many mainstream journalists don’t want to admit this is an example of the problem with the establishment media. It’s too comfortable sucking up to governments and the powerful. As a consequence, it cheers on the persecution of anyone who challenges this arrangement. And Julian Assange is currently their main target.