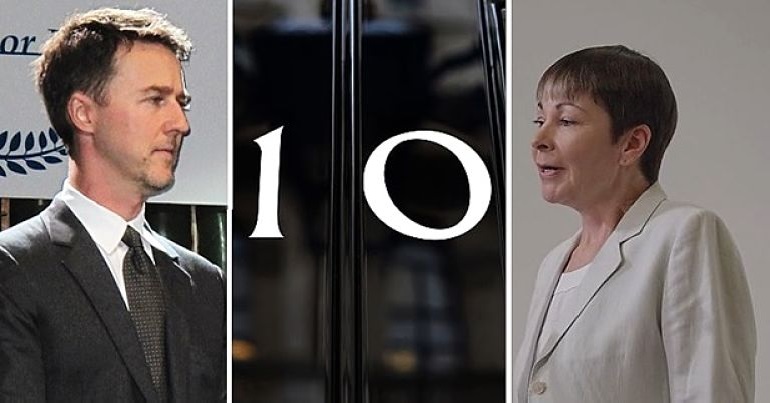 Campaigners will deliver an urgent letter from Ed Norton, Caroline Lucas, and many others to Downing Street on 13 April. It calls on the UK government to “stop granting imports of hunting trophies to the UK, starting with urgent action on protected species”.

The letter – seen by The Canary – accompanied by two petitions, will land on Theresa May’s doorstep as thousands of people in 70 cities around the world march for elephants and rhinos. They think its high time officials take concrete action to save these vulnerable, iconic species from extinction.

The letter from Norton, Lucas, William Shatner and others demands the UK do the same.

March for Elephants and Rhinos

The Global March for Elephants and Rhinos (GMFER) is running for its fifth year on 13 April. It’s happening just before the Convention on International Trade in Endangered Species of Wild Fauna and Flora (CITES) CoP18 meeting in Sri Lanka in May. Campaigners say this year’s meeting will consider proposals to lower protections for elephants and to reopen trade in ivory and rhino horn. CITES already allows hunters to kill these animals, and numerous other species, to take home their body parts as ‘trophies’.

So, this year, GMFER has two key demands. It calls on CITES to exempt all protected species from trophy hunting. Furthermore, it’s calling on the convention to ban animals with protected status, such as African lions, from captive breeding. GMFER says such activities fuel the illegal wildlife trade and the demand for endangered animals.

As part of the efforts for GMFER this year, Action for Elephants UK has written the open letter for May. It’s also supported by the Born Free Foundation, the Campaign to Ban Trophy Hunting (CBTH), and Four Paws. The letter begins:

The world’s iconic species and megafauna are disappearing in our lifetimes. Elephants, lions, rhinos, giraffes, leopards and tigers are all threatened with extinction in the wild, their numbers a fraction of what they once were. Decimated by poaching, habitat loss, conflict with humans, and the vast trade in their body parts, these animals are also losing their lives to hunters who gratuitously kill them for ‘sport’.

Overall, it makes for dire reading. The letter points out that:

The letter also details the consequences of the numerous threats, including ‘trophy’ hunting, these animals face:

Meanwhile, the letter takes aim at the grotesque practice of ‘canned’ hunting. It explains:

In South Africa, a huge captive industry breeds lions to be killed by trophy hunters and for trade in their bones and other body parts, mainly to Asia. More than 8,000 lions are caged in these death facilities while only 1,300-1,700 adults survive in the wild.

As The Canary recently reported, ‘trophy’ hunting in the wild poses its own unique threat. Because hunters often kill the most impressive animals, such as large elephants with big tusks. And, as CBTH points out:

Tusks are an indicator of the strength of the individual. Removing these animals from the gene pool weakens the local population, which reduces the viability of the species

The removal of these large males also creates an imbalance in elephant communities. It essentially leaves groups without a ‘figurehead’ who can control the younger bulls, CBTH says. This can lead to greater risk of human/wildlife conflict. Furthermore, as a probable consequence of the poaching and hunting of elephants with large tusks, the average tusk size has reduced in recent years. Elephants use their tusks to find water during the dry summer. So, CBTH says:

Shorter tusks will make it harder for elephants to survive longer, [with] more severe droughts likely to occur with accelerating climate change.

The practice is also leading to unsustainable hunting quotas being set, without regard for the size of the local elephant population. And it’s incredibly cruel, as hunters often opt for lengthy, painful deaths of the animals by, for example, avoiding head shots. This ensures their ‘trophies’ are in optimal condition for displaying in whatever way they please.

Following the killing of Cecil the lion in 2015, the UK government vowed to ban lion trophy imports by the end of 2017 unless “there are improvements in the way hunting takes place in certain countries”. CBTH says there have been “few if any changes made to practices around lion trophy hunting”. But the UK government has failed to keep its promise.

That’s why high profile figures, conservationists, animal welfare groups, and concerned members of the public are marching through London to Downing Street to demand an immediate ban on the import of hunting trophies on 13 April.

The time to act is now, before these magnificent animals are lost forever. If this government doesn’t have the decency or courage to do so, we must elect another that will.