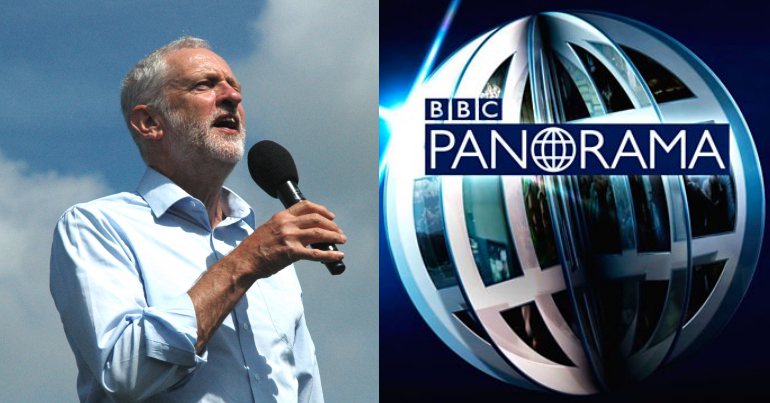 On 10 July, the BBC‘s Panorama broadcast an hour-long show called Is Labour Antisemitic? The BBC claimed it presented “exclusive interviews from key insiders and access to confidential communications” in order to reveal “evasions and contradictions at the heart” of the Labour Party. Jewish Voice for Labour (JVL) has since responded with a statement calling the episode a “farrago of half-truths, distortions and outright invention”.

“The BBC has reached a new low”

JVL is a network for Jewish Labour members. It said that the BBC “reached a new low point” in broadcasting this episode.

The group raised concerns that the BBC “entrusted a programme of great sensitivity” to John Ware. It argued that Ware is “a muck-raking journalist whose prejudices are well known”.

JVL also criticised the “principle ‘witnesses’ offered by the programme”. It said those interviewed:

were Labour Party ex-officials, appointed under Blair and deeply hostile to the members’ choice for Leader, Jeremy Corbyn. During the first years of Corbyn’s leadership it was officials working for the then General Secretary Iain McNicol who sabotaged the disciplinary process – not to protect antisemites, but so that Corbyn could be blamed for it. As described by Jewish NEC member Jon Lansman, on resigning they stole and then deleted whole tranches of correspondence – so that once again the Party could be blamed for not processing allegations effectively.

These disaffected former officials include those who have always opposed Jeremy Corbyn’s leadership, worked to actively undermine it, and have both personal and political axes to grind.

“Unforgivably careless with its facts”

JVL then raised concerns about the “selective choice of additional witnesses” in Is Labour Antisemitic?. It noted:

A small number of (unnamed) Jewish Labour party members made personal statements to camera of their discomfort at their sense of being in a hostile environment.

Yet JVL says there are “hundreds of statements from Jewish members entirely comfortable within the Party” that Panorama failed to interview. It continued:

A whole constituency party, Liverpool Riverside, was grotesquely maligned as antisemitic and bullying, but not one member of the CLP, Jewish or otherwise, was invited to respond.

JVL claims that Panorama “was unforgivably careless with its facts”. For example, JVL said Panorama pointed to people like Jackie Walker as antisemitic despite “no charge of antisemitism” being upheld against her. JVL also says the programme failed to mention that Walker is Jewish. It continued:

The only supposed ‘crime’ of hers referred to – pointing out the Jewish role in the slave trade – was falsely represented without noting that she had been acquitted of the charge.

According to JVL, “the campaign of allegations” about antisemitism in Labour also “applies to the whole UK mainstream media”. It pointed to research by the Media Reform Coalition on the matter. It noted that this research found that “the BBC and Guardian out-did all their competitors in bias”.

“Any allegation of antisemitism,” JVL said, “must be taken seriously – and proven cases must be dealt with appropriately.” However, it also argued that “many of the alleged instances of antisemitism are not what they seem”. It said:

Many are quite evidently statements that members have made about the Israeli state or Zionism, twisted athletically to assert that their criticism is directed at and insulting to Jews. Many are the result of bulk allegations generated on an industrial scale by just a few organisations, prominent among them the Campaign Against Antisemitism, and Labour Against Antisemitism, set up explicitly to undermine the Corbyn leadership and to protect Israel.

JVL also noted that Panorama failed to mention the staff expansion by Labour’s current general secretary Jennie Formby. Those staff are now “struggling to catch up with the backlog” of additional accusations from these organisations, it said.

JVL accused the BBC of presenting “a grossly simplified and utterly distorted picture” of Labour’s efforts to deal with antisemitism allegations. It concluded:

It is shameful that the BBC has joined in an orchestrated campaign whose principal aim is quite clearly to prevent Jeremy Corbyn becoming Prime Minister of a Labour government committed to socialism.

The BBC has defended the programme. In a statement to The Canary, a spokesperson said:

The BBC stands by its journalism and we completely reject any accusations of bias or dishonesty.

Last night’s Panorama explored a topic of undoubted public interest, broadcasting powerful and disturbing testimonies from party members who’d suffered anti-Semitic abuse. We also heard from former Labour officials, some of whom defied non-disclosure agreements to speak out about their experiences inside the Party and its anti-Semitism crisis. This shows the serious questions facing the party and its leadership on this issue.

The programme adhered to the BBC’s editorial guidelines, including a full right of reply for the Labour Party.