It's now clear who Jeremy Hunt has banned from his ‘media freedom’ event. Irony is dead. - The Canary 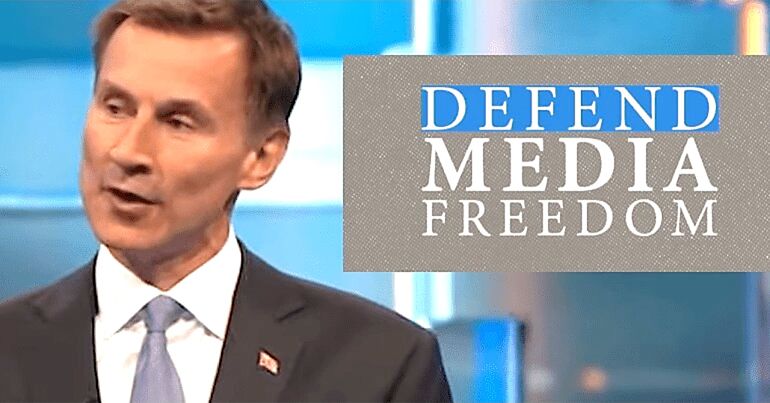 Irony, it seems, is dead. Because foreign secretary Jeremy Hunt has barred journalists from attending the UK government’s ‘media freedom’ conference going ahead on 10 and 11 July.

World leaders, journalists and others gather in London… for a 2-day conference to agree ways to defend media freedom. Chrystia Freeland, Canadian Minister of Foreign Affairs, and Jeremy Hunt, the UK Foreign Secretary are hosting the conference, which is the first of its kind.

Yet the government has banned journalists from Russian-funded media outlets RT and Sputnik from attending the conference. The BBC reported that a spokesperson said:

We have not accredited RT or Sputnik because of their active role in spreading disinformation.

An RT spokesperson told: the i:

It takes a particular brand of hypocrisy to advocate for freedom of press while banning inconvenient voices and slandering alternative media; sadly, the world has learned to expect just that from the UK Foreign Office.

In response to the dispute, Jodie Ginsberg – the chief executive of the Index on Censorship – condemned the foreign office:

Cherry-picking only the media that one government considers acceptable is precisely the kind of action we condemn from authoritarian states.

The BBC versus RT

Backing the foreign office ban of RT, the BBC claimed:

The BBC tries to cover all the angles of the story, including those that wouldn’t be pleasant to the UK government. RT always picks up pundits, questions, issues, angles that show Kremlin and Russian government in a positive way.

The BBC‘s charge against RT may be true. Yet the BBC may not be the best messenger. Because there is widespread evidence showing that the broadcaster is systematically biased in favour of the UK establishment and Conservative Party:

There are structural reasons for this. The UK Conservative government appoints the chair of the BBC board and its four national directors.

If the BBC and the corporate media offered substantially critical coverage of the UK establishment, then RT wouldn’t have an audience. But as it stands, the mainstream media globally functions as an arm of US-led state-corporate power. In Giants: the Global Power Elite, sociologist Peter Phillips points out that six mass media corporations control the “lion’s share” of news worldwide. And a handful of trillion dollar investment funds bankroll these six multinational corporations, which pump out press releases prepared by PR companies. In this environment, anyone can see why Western people consume RT coverage, which, although blinkered on Russia, provides some robust journalism on the UK and the US.

Psychological torture of a journalist

But for Hunt and the Conservatives, it’s not just banning journalists from a media freedom conference that smacks of Orwellian propaganda. Hunt and his government are currently presiding over the “psychological torture” of Julian Assange. After visiting Assange in prison, the UN special rapporteur on torture said:

The evidence is overwhelming and clear.

The UK government is facilitating the torture of a journalist for exposing the crimes of governments. At the same time, they are hosting a ‘media freedom’ conference, from which they have banned critical reporters. This isn’t from the pages of George Orwell’s 1984, this is the UK government in 2019.