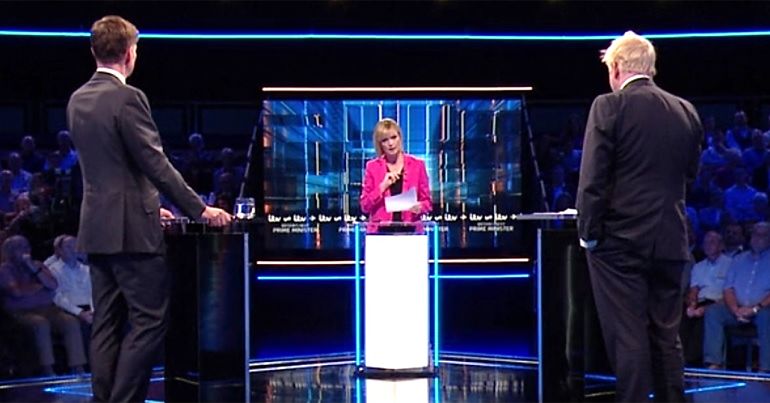 The ITV leadership debate was very revealing. Not because of what Boris Johnson or Jeremy Hunt said. But due to what they didn’t say because ITV didn’t even bother to ask.

The broadcaster didn’t probe the leadership candidates at any point in the debate about the climate catastrophe. This is the issue that parliament itself put at the top of the government’s agenda in May by declaring a climate emergency. It’s also the problem that the UK is currently ‘going backwards on’, according to the Committee on Climate Change (CCC). And, of course, it’s the issue that determines the future of all life on earth.

But no, apparently the British establishment didn’t deem it necessary to raise the matter on national TV with the country’s future PM.

Instead of raising this fundamental issue, ITV fired questions about Brexit at the candidates for over half of the entire broadcast. And while the UK’s future beyond the EU is important, it pales into insignificance against the future of the entire planet. The broadcaster did see fit to ask [42.50; 43.56] both candidates about two environmentally damaging UK projects, HS2 and Heathrow’s potential third runway. But it did so without even raising the environmental implications of them. Revealingly, Hunt didn’t address the cost of these projects to the environment in his answers either. Johnson’s attention to the environmental impact was also minimal; he only raised concerns over the air pollution a third runway could cause.

The Canary contacted ITV for comment. An ITV spokesperson said:

ITV has dedicated a lot of time to the important subject of climate change not just recently but also over the past 20 to 30 years. We will continue to do so in our news and current affairs output. It’s an important subject but no single debate programme can ever cover all important matters and allow time for proper debate.

Many important questions were addressed in last night’s debate. We’re content with the subject areas we chose but recognise that all viewers will have their own views on what they’re most interested in. The programme addressed topics including; Brexit, austerity, LGBT rights, abortion, President Trump, HS2, Heathrow expansion, trust in politics and the likelihood of an election. Over 4 million viewers tuned in and many have commented positively on the programme.

The glaring omission in the ITV debate was swiftly followed by the publication of two CCC reports on 10 July. The committee, which serves as the UK government’s advisory body, found a “shocking” lack of government planning for the climate crisis. As the New Scientist reported, in response to a question about whether the UK is “going backwards on adaptation”, i.e., adapting to the warmer world, the body’s chief executive Chris Stark said: “That is indeed the way it looks”. Stark added:

There really needs to be a proper national plan for adaptation and it’s not what we have at present. There are loads of gaps. It’s peripheral, and partial and incomplete

The whole thing is run by the government like a Dad’s Army… You need to make real changes to protect people here and now from the climate change that we know is happening. We are not even preparing for 2C [rise in global temperature] let alone the position we might be in if the world does not [drive emissions down to zero]

The CCC says it identified 56 adaptation opportunities and risks. It claims the government’s adaptation plans don’t address 21 of these. It also says the gap between the government’s emissions targets (what it says) and its policies (what it does) is getting worse. Indeed, the UK is on course to miss its carbon targets for 2025 and 2030. It recently set another target for zero emissions by 2050. On this, Stark said:

A net zero target is great but it’s not a magical wand to cut emissions, you really do need a national plan

This is a truly brutal reality check on the government’s current progress in tackling the climate emergency. The new prime minister really must take the government’s net zero commitment and turn it into something practically meaningful.

These reports are a ‘brutal reality check’. But so was the ITV debate. Because far from turning the government’s net-zero commitment into something “practically meaningful”, the two men vying for the PM’s position aren’t even talking about it or the climate emergency in national debates. And they’re getting away with not addressing this monumental issue because the British media is failing to confront them on it.

Clearly, we’ve got no hope of tackling the climate crisis with any of these goons running the show.