May tries to lecture Corbyn at PMQs, but it totally backfires on her - Canary 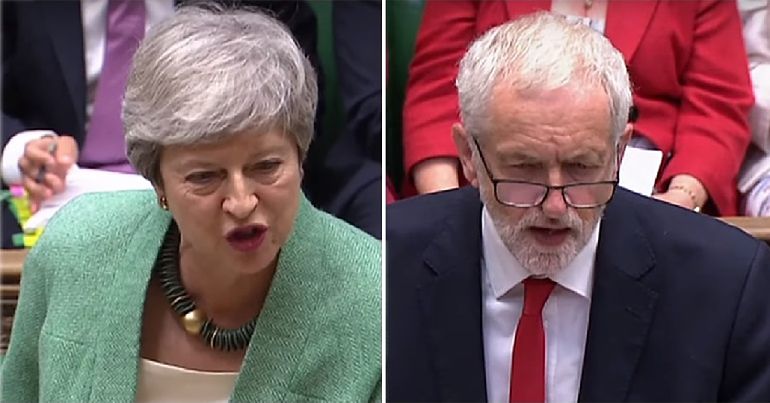 At Prime Minister’s Questions (PMQs) on 10 July, Theresa May tried to attack Jeremy Corbyn. But her assault soon backfired disastrously.

If the right honourable gentleman is really interested in tackling injustices, then the biggest injustice he should tackle is in his own Labour Party – and deal with antisemitism.

Corbyn insisted that Labour is “totally committed to eliminating racism in any form – antisemitism in any form”. But he then had a perfect comeback for May, saying:

While she is about the lecturing, how about the investigation into Islamophobia in her own party?

Two days ago, a Channel 4 documentary about the Conservative Party aired. It revealed a survey showing that “56% of party members agreed that Islam is a threat to the British way of life”. This yet again brought into focus the widespread Islamophobia in the party.

Labour is not immune from antisemitism. But according to numerous reports, antisemitic discrimination exists across society; and most comes from far-right groups. Accusations of antisemitism in Labour reportedly relate to 0.1% of the party’s 540,000-strong membership. The party is also taking more action than other parties (including the Tories) to root out racism. However, the establishment media has faced serious accusations of “misleading”, ‘distorted’ and “inaccurate” coverage of all this; and it is all but silent about the Conservatives’ woeful response to “endemic racism” in its own ranks.

15-20 million British people hold at least one viewpoint that is anti-Semitic. Millions from every party's voter base. Millions of leavers & remainers. Millions of young & old. This is a problem we have to tackle as a society, together. pic.twitter.com/1MJBNMBb4j

Jeremy Corbyn has done nothing to tackle antisemitism in the Labour Party & we know this to be because…………. oh, no, wait, what? You mean he did all this? Yes. pic.twitter.com/L5tdTFOoQe

If Jeremy Corbyn is an anti-Semite, please may you give some consideration to explaining these 50 acts over the last 42 years? Warmest wishes. pic.twitter.com/w6shgoTDfw

Many prominent Jewish voices on the left have long accused Corbyn’s opponents of using antisemitism as a political football to attack Corbyn. As award-winning Israeli journalist Gideon Levy points out, such accusations have become a favourite tactic to “blackmail.. anyone who dares to criticise Israel”. Renowned Jewish academic Noam Chomsky, meanwhile, has called the smear campaign “an insult to the memory of the victims of the Holocaust”.

Theresa May’s Tories are in no position to lecture anyone

Considering all the above – and more, Corbyn also stressed at PMQs that he’d be taking no lectures from May on fighting racism:

Coming from the prime minister who… created the ‘hostile environment’ – which brought about the Windrush scandal, … who ordered ‘Go Home’ vans to drive around London, who refuses to acknowledge Islamophobia in her own party, … and whose party consorts with racists and antisemites in the European parliament, … we don’t need those kind of lectures.

The UN says legal aid cuts have overwhelmingly affected the poor and people with disabilities.

That is a disgrace. #PMQs pic.twitter.com/wPhfqVQWkq

All racism is despicable. And we must oppose it everywhere. But Corbyn is 100% right: no one should be taking lectures from the Tories on this issue.