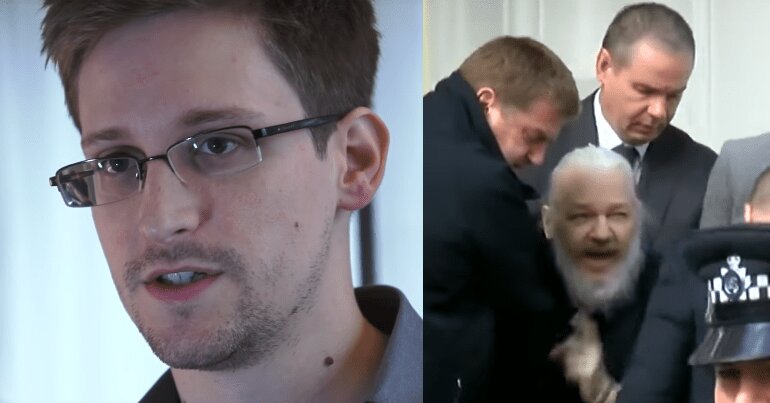 On 11 April, whistleblower Edward Snowden put in plain terms the terror of what Julian Assange’s arrest really means. Former CIA employee Snowden rose to international prominence in 2013 after leaking documents showing that US and UK governments were indiscriminately spying on their citizens.

“A dark moment for press freedom”

Snowden points out that the WikiLeaks team has won many awards for its reporting. These include:

Aside from a breach of bail (see a timeline of his case here), Assange’s arrest concerns an extradition request from the US. The now unsealed indictment alleges that Assange is guilty of ‘conspiring to commit computer intrusion’. It claims that Assange helped whistleblower Chelsea Manning crack passwords in order to make it more difficult to identify her as the source of the Iraq and Afghanistan war logs.

The Iraq war logs showed that US and UK officials lied about having no official statistics on deaths. The leaks identified over 66,000 civilian deaths from 2004 to the end of 2009. They also revealed that the US military indiscriminately gunned down over a dozen people in Baghdad, including two Reuters media staff.

In response to Assange’s situation, the former WikiLeaks editor has many international organisations defending his human rights. Recently, the UN’s Working Group on Arbitrary Detention reiterated a ruling it made in 2015. It concluded that the UK government was ‘arbitrarily detaining’ Assange and demanded that the authorities allow him to leave. The Conservative administration tried to appeal the UN ruling but failed, and has since then ignored it.

WikiLeaks is an independent media organisation that specialises in publishing information from whistleblowers that it deems to be in the public interest. The publisher has also released documents on governments across the world, including the US, Iran, Kenya, and China, as well as on the UK far right.

In short, Snowden is spot on that this is fundamentally about press freedom. Washington is trying to crush a dissident journalist for revealing its crimes. This is an attack on the world’s right to knowledge; and we must resist it as such.