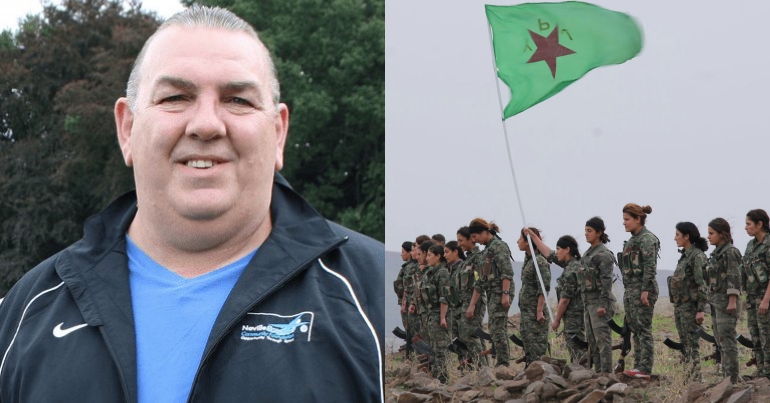 A footballing legend turned his Twitter account over to what is arguably the most important current revolutionary movement in the world.

On 10 April, Neville Southall gave London Kurdish Solidarity (LKS) access to his 147k followers. LKS used the opportunity to set out why the movement is so important and to highlight the thousands of Kurdish activists currently on hunger strike.

Several tweets set out the history of the Kurdish struggle and how its current politics were adopted:

Also in the same period in the early '90s the #PKK began looking at what happened in the #USSR and other state socialist countries, and asking themselves what went wrong. An ethic of healthy criticism and self-criticism has always been key to the movement's politics.

It then explored how imprisoned Kurdish leader Abdullah Öcalan began developing these ideas:

This process was deepened dramatically by #Ocalan's imprisonment, where he read the works of anarchist communist #MurrayBookchin (@debbiebookchin's dad), and realised the basic problem was the state – a free society can't be made through a system of domination like the state

And in addition to recognising the ‘problem of the state’, environmentalism and gender equality became priorities of the movement:

On top of this #Ocalan saw the ecological destruction reaped by states, colonialism and capitalism across #Kurdistan, and reading #Bookchin saw that this was inextricable – so any meaningful #socialism has to be not only beyond the state, not only gender liberated, but ecological

And this led to:

This all culminated in what's known as the #NewParadigm, announced in a series of prison writings that provided the movement with a concrete set of politics and a strategy to implement them, known together as #DemocraticAutonomy, #DemocraticConfederalism and #DemocraticNation

The account also gave links for more information about some of the key themes: Democratic Confederalism, Democratic Nation, and the Women’s Revolution.

As The Canary has previously reported, these are more than just ideas. In 2012, a revolution began in the majority-Kurdish region of Rojava in northern Syria. People organised themselves into communes, declared autonomy, and began practising stateless direct democracy. And they quickly became some of the most effective local forces in the fight against Daesh (Isis/Isil). This interview with an anti-fascist fighter shows how these principles are working on the ground. The video below also gives more information:

But more important than what the #KurdishFreedomMovement destroyed in Syria (#ISIS) is what they built – as shown in this great documentary (@LDNKurdSol) https://t.co/Sh5RHrRAjY

Thousands of prisoners across Turkey are currently on hunger strike. Kurdish MP Leyla Güven started the hunger strike while in prison. Now at home, Güven has not eaten for 155 days and is critically ill.

Since starting her hunger strike, Güven has inspired thousands to join her. In the UK, these include Iman Sis, a Kurdish activist in Wales who is on day 115 of his hunger strike.

Southall’s account set out why so many are on hunger strike:

So why's Imam on hunger strike? He and thousands of other Kurds and Turks worldwide are on strike with the same demand: an end to the illegal isolation of #AbdullahOcalan, founder and leader of the #KurdishFreedomMovement

#Ocalan's been in prison since 1998, when he was illegally kidnapped from Kenya by an international conspiracy and taken to Turkey. Since then he's been in total isolation on the island of Imrali, in conditions defined as torture according to international law

And it set out why Öcalan is so important and why breaking his isolation is essential to peace in the region:

But #ImamSis and thousands of others aren't demanding #Ocalan's freedom because of attachment or sentiment alone – we need to think of #Ocalan as a figure, like #Mandela, able to bring a brutalised people to the negotiating table, and achieve a lasting peace

And this isn't empty talk or wishful thinking: #Ocalan has called several unilateral ceasefires since the early '90s, and since his imprisonment has written several detailed proposals for meaningful peace and democratisation – all rebuffed by the #TurkishState

The hunger strikers are not asking for special treatment for Öcalan. They want to break his isolation. Öcalan is currently held in conditions where he has no access to lawyers, to his family, or to visits. The hunger strikers are demanding that Öcalan has the same rights as other prisoners in Turkey; rights that he should already be entitled to under existing Turkish law. They’re just asking for Turkey to respect its own legislation.

A lesson for us all

The principles and organising practices of the Kurdish movement are inspirational. And there is a lot we can learn not only from Rojava but from Bakur, the region of Kurdistan within Turkey’s borders.

But despite defeating Daesh in northern Syria, this revolution is under threat from Turkish president Recep Tayyip Erdoğan. Following local elections on 31 March, Erdoğan is refusing to let Kurdish mayors take control of their municipalities and criminal cases have been opened against others. And Erdoğan is threatening to continue his fight against Kurdish people in Syria. In 2018, the Permanent Peoples’ Tribunal found Erdoğan and the Turkish state guilty of war crimes against the Kurdish people.