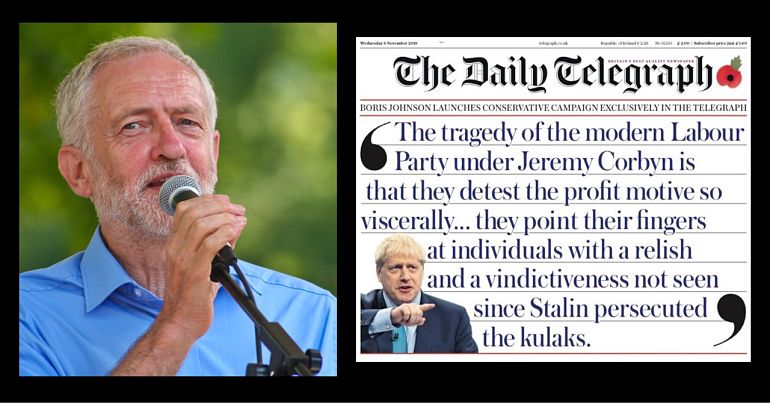 The front page of 6 November’s Telegraph newspaper reads like the nightmare of paranoid billionaires. Because it is. And Labour leader Jeremy Corbyn didn’t waste a moment in pointing that out.

The nonsense the super-rich will come out with to avoid paying a bit more tax… pic.twitter.com/FlUl29ksvz

Damned if you do…

According to right-wingers, there’s no good motive for being left-wing. If you’re poor, they say you’re driven by the politics of envy. If you’re not poor, they call you a hypocrite for having any luxuries at all. This stems from their dismissal of the left as anti-prosperity. Which is entirely arse-about-face. The left is pro-prosperity, and wants to share it around and keep it shared. To do that, it puts in place rules to stop anyone accumulating dangerous concentrations of wealth and power. Capitalism is, by design, all about the personal accumulation of wealth and power.

Think of it like a family dinner. There’s only so much food on the table. If one member of the family grabs up more than their share, everyone else has less than theirs. Now, a little inequality here and there, and no one makes a fuss. But imagine one person piles up their plate with almost every morsel on the table. There’s no way they can hope to eat it. They just want the security of not having to worry about food today. Meanwhile, everyone else at the table is left to divide up a couple of potatoes and the remaining slice of beef. Now imagine this doesn’t just happen once. It’s everyday for a week, a month, a year. People at the table have become malnourished and some have died. But the hoarder doesn’t stop. They argue there’s no connection between their hoarding and what’s happening around the table. Well, that’s our economy.

It’ll ensure your pay is at least a living wage; that you have access to secure, affordable housing; that your child’s school is fully funded and fast food chains are kept out of the cafeteria; that your local hospital and all its staff are world class and properly managed; that your utilities are taken out of the hands of reckless companies which yank up prices every quarter while service declines. All of these things prevent billionaires from extending their wealth and power at your expense. And billionaires are seriously pissed off about it. So they’re using their newspapers and news channels to fight it.

Over 80% of UK newspaper reach is dominated by just three companies. And the rest is owned by only a handful more. As The Canary has covered extensively, these papers are used to create public attitudes that are beneficial to the owners. In the case of The Telegraph, it was revealed in 2018 to be paying Boris Johnson £275,000 a year to do just that. A serving MP being paid 10 times the average UK annual salary to write one column a month. When challenged previously on the massive paycheque for a second job, Johnson called it “chicken feed“.

Worse, even a public broadcaster like the BBC can be compromised.

The London School of Economics and Cardiff University found the BBC biased towards business and conservative ideas. For example, the chart below tracks the guests invited onto the BBC’s Today programme in the wake of the 2008 financial crisis. No surprise then that the crisis was re-framed away from the financial services industry and politicians who created it. 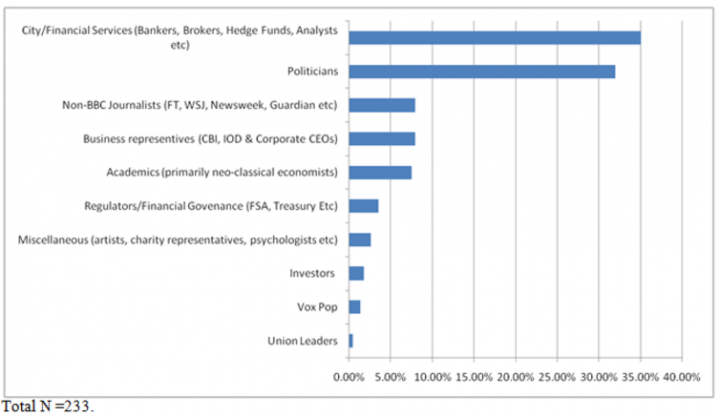 Critical thinking isn’t a talent, it’s a skill. It’s something each of us can train and develop over time. The benefit of living through this dustbin fire era of human history is we have ample opportunity to practise. Propaganda is dialled up to levels of hysteria not witnessed since the McCarthy-era US. Even the buildup to the 2003 invasion of Iraq was less frenzied than what we’re witnessing today.

But we don’t have to wait for better press regulation, or a new government, to fight back. We fight back by cutting out irresponsible news sources from our timelines. Don’t read, don’t watch, and definitely don’t pay to be lied to. That revolution can start in you, right now.