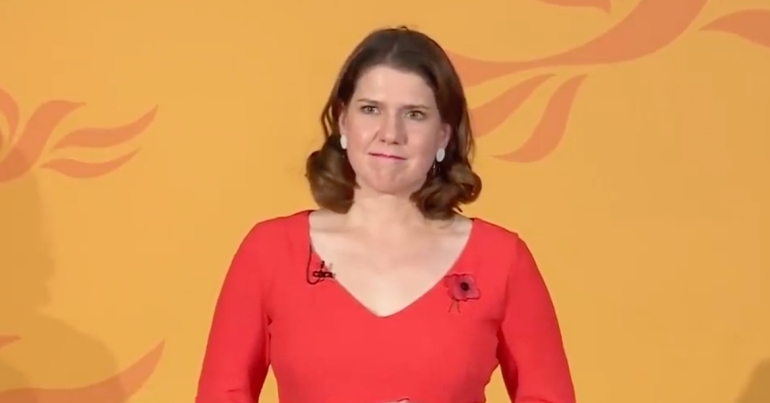 It’s officially an election now that the first battle bus has been revealed. Unfortunately for Jo Swinson and the Liberal Democrats, though, the big reveal got off to a bad start; because people soon took to social media to take the piss. Fortunately for the rest of us, it provided some much-needed comic relief at the expense of the party that just can’t seem to stop misleading voters about marginal constituencies or fabricating quotes.

The bus, emblazoned with Swinson’s face, also has the tagline “Jo Swinson’s Liberal Democrats”. Many thought this made the Lib Dems sound more like a rock band than a serious political party (and as people pointed out, not a successful band at that):

The slogan on the side of the Lib Dem bus reads “Jo Swinson’s Liberal Democrats”, which makes it sound a bit like a tour bus for an 80s band where there’s a dispute over the name (“Mike Nolan’s Bucks Fizz”). pic.twitter.com/Seg7QxSz0r

Jo Swinson's Liberal Democrats sounds like an old rock band who have fallen out and now there are two versions touring, each containing a couple of the old members. https://t.co/vsMRo8gd2x

It’s like when all the original members of a once successful band have left and a nobody comes in and takes over. David Van Day’s Bucks Fizz. Jade Ewen’s Sugababes. Jo Swinson’s Liberal Democrats.

'Jo Swinson's Liberal Democrats' makes me think of one of those bands where the original lead singer has naffed off so someone else has to take on the job. https://t.co/sxot1ePtEv

Another Angry Voice was one of several Twitter accounts that highlighted the irony of the bus, given accusations that the Labour Party is somehow a ‘cult of personality’:

With a vast picture of her face on their election bus!

And these alarmingly cultish Lib-Dem freaks have the absolute brass neck to witter on about Corbynism supposedly being a personality cultpic.twitter.com/bLvptPJmC4

And she certainly didn’t impress one local constituent:

My local MP @joswinson has apparently renamed her party "Jo Swinson's Liberal Democrats", put it on the side of a bus with her giant face and shown us that she's an egomanic with narcissistic tendencies and delusions of grandeur. #JoSwinson #YellowTories #GE19 #GeneralElection19 pic.twitter.com/sduvhaTXio

Some wondered how long it’d be before Chuka Umunna gets his own bus:

I can see this turning out a bit Bucks Fizz. Only a matter of time before another bus comes along with 'Chuka Umunna's Liberal Democrats' on the side.

And others took the piss and reminded everyone what the party currently stands for:

Finally, some just couldn’t believe that it was real:

I've been at work, had my phone off for hours. This is a joke right?

The mick-taking is beautiful. But it’s beautiful because the Lib Dems are such a rotten party, and Swinson such a rotten leader. Her voting record is appalling. She consistently voted to reduce welfare and benefits, including cutting payments for people with illnesses or disabilities. She also voted to cut the Educational Maintenance Allowance for 16-to-19-year-olds. And she helped to raise university tuition fees, despite promising not to as one of the key policies that helped elect many Lib Dem MPs in 2010. Her track record on environmental issues, meanwhile, shows she supported the badger cull, fracking, and HS2.

Meanwhile, the party has already faced accusations that it’s trying to mislead voters. In several seats that are clear Labour/Conservative marginals, the Lib Dems are claiming they can win. Journalist Adam Bienkov tweeted one such example:

Another very dodgy campaign leaflet from the Lib Dems.

Just spoke to YouGov and they confirm they have not conducted any polling in Putney. pic.twitter.com/1MsxNfPLpO

For comparison here is the bar chart the Lib Dems are putting out in Putney vs the result in 2017. pic.twitter.com/UY5QWlbT8r

In fact, in 2017, the Conservative Party took 44.1% of the vote, and Labour 40.78%. The Lib Dems, meanwhile, convinced only 11.62% of the electorate to vote for them. And unsurprisingly, the ‘tactical.vote’ website recommends voting Labour.

This type of manipulation is, in fact, a real problem for the Lib Dems (and a problem for anyone who cares about a fair and democratic election). Because it means that, in the few seats that are genuine marginals, people may not vote for them. The party may simply become ‘the child that cried wolf’, and no one will believe them when it’s real.

Even in the seats where the Lib Dems could win, meanwhile, it’s going to be an uphill battle to attract voters. Because most people would rather stick themselves in the eye with a knitting needle than vote for this lot of lying yellow Tories.