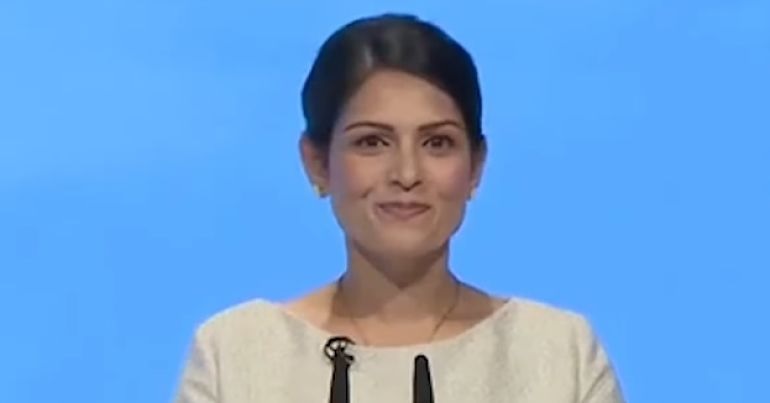 Britain’s post-Brexit immigration policy is now clear. Home secretary Priti Patel grinned her way through a round of interviews on 19 February laying it all out.

The UK plans to deny entry to any immigrant worker whose potential job offers less than £25,600. There will be some exceptions, where the earning threshold is £20,480, for professions enduring a skills shortage. Any foreign workers who can’t speak English won’t be allowed in.

Patel’s immigration policy announcement comes after ministers have been regularly making an incomprehensible promise to “level up” the country. Perhaps this new points-based immigration system is the key to what that slogan actually means.

The Guardian‘s economics editor Larry Elliot broke down how the new points-based system will work:

To be eligible to apply to come to the UK, an overseas citizen will need to secure 70 points and for that they will require a job offer (20 points), be applying for a skilled job (20 points), be able to speak English (10 points) and – in most cases – be enjoying a salary of £25,600 or above (20 points).

As Boris Johnson said previously, it’s essentially an attempt to emulate the immigration policies of Australia. Given that Australia’s immigration system has gone hand in hand with political slogans such as “NO WAY, you will not make Australia home” and internationally condemned offshore detention centres, many naturally fear the policy shows Britain is embracing its own racist tendencies.

Interestingly, the policy has also led to high levels of immigration in Australia. As the New York Times reported in 2019, a census in 2016 showed that more than a quarter of Australians were born abroad. The figure the media outlet cited for Britain was 14%.

Levelling up or levelling down?

Nonetheless, the government says it’s merely listening to the “clear message” from Brits in the EU referendum and the 2019 general election. But what will the policy mean for them?

Well, so far, the plan comes without any hard and fast promises on reducing immigration. What it insists on is stopping any worker coming into Britain for low-paid work, specifically any jobs paying less than £25k in most circumstances. So what’s guaranteed to Brits thus far is that the low-paid jobs will all be reserved for them. Or most of them, at least. The government is expanding a seasonal worker pilot scheme this year – aimed at fruit and vegetable pickers – allowing for farms to hire 10,000 workers from outside the EU on a temporary basis. It plans to ‘evaluate’ the pilot before making decisions on future plans. So the government is clearly considering its options for continuing to bring in workers for some low-paid jobs.

Currently, of course, there’s no barrier to UK citizens applying for low-paid work. The UK has a minimum wage that all Brits are entitled to earn. Certain sectors, like retail, say that not many British people apply. Under the new system, that may change. Because if many of the higher paying jobs are attracting talent from overseas, there will presumably be an abundance of low-paid jobs to go around (if the companies that offer them don’t decide to up sticks and head to a country where there’s a more willing workforce).

Low-paid jobs are not, of course, an inevitability. Governments can legislate for realistic living wages and good conditions for working people. But under a Conservative government, good working standards are rarely a guarantee. Indeed, Johnson’s government has already made clear that workers’ rights are up for reform after Brexit.

Is this what the government means by ‘levelling up’ the country? That everyone in Britain – apart from those lucky enough to secure a higher paying job – will be equally screwed?

The government’s bright idea for immigration policy risks being as divisive as every other brainwave it’s had since, well, ever. Far from tackling Britain’s racism problem, it threatens cementing it further in policy. It also risks creating the impression of a haves and have-nots divide based on where people were born (which couldn’t be less true in terms of global wealth and poverty).