The government is trying to rewrite coronavirus history. We mustn't let it. - The Canary 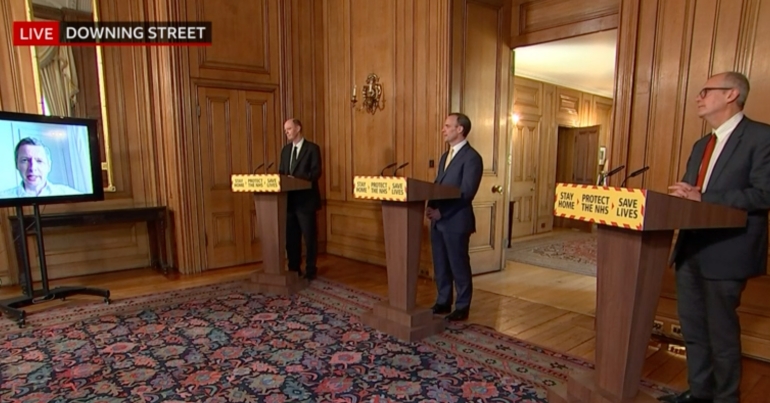 Right from the beginning, the government’s strategy over coronavirus has been a mess. Whether it’s herd immunity, testing, or personal protective equipment (PPE), it has failed time and again to deliver a coherent plan and meet its own goals.

This shambolic response has caused deaths. It’s caused the virus to spread through the UK in a ferocious manner. And it could have been avoided if our government hadn’t lost precious time talking about herd immunity and not taking action.

But our leaders would rather we didn’t talk about that. They’re trying to shift the narrative. In reality, they’re gaslighting the public by rewriting history to omit their failures.

The government is tightly controlling the news agenda. Its daily press briefings are not keeping it accountable; they’re allowing it to recycle soundbites. While lobby journalists don’t always do the best job, they have – at times – tried to ask some decent questions. It’s just the questions aren’t answered; and because it’s a press conference, there isn’t the scrutiny of an actual interview.

On one occasion, one journalist asked for an explanation of the science behind a decision. The response, as always, was “we’re following the science”. But even if this wasn’t a ludicrous answer in itself, as public health professor Helen Ward wrote in the Guardian:

The government assures us that its decisions and timing are based on science, as if it is a neutral, value-free process resulting in a specific set of instructions. In reality, the science around coronavirus is in its infancy and developing daily, with researchers across the world trying to understand how the virus spreads, how the body responds – and how to treat it and control it.

This means that, every day, we’re subject to a massive state propaganda exercise masquerading as public information and accountability. Meanwhile, government ministers appear to avoid interviews where they’d face any kind of scrutiny. As Newsnight presenter Emma Barnett noted on 15 April:

It’s not even as though the daily briefings contain much information at times. For example, on 15 April, health secretary Matt Hancock launched a new brand. Yes, in the middle of a pandemic, he thought carers would appreciate getting a new badge.

But this isn’t Blue Peter. A badge does nothing to alleviate the problems in social care. In some parallel universe, you’d be forgiven for thinking that Hancock was about to unveil better pay and conditions for carers. But no. Working for the minimum wage (or less if you include travel time) is apparently reward enough if you’ve got a shiny new badge.

The government acted too late to save the UK from the worst of the pandemic. As the former chief scientific adviser David King told Newsnight:

If we just look at what happened back in March, when we had known about the coronavirus epidemic for some time; we’d certainly watched it happening in China, watched how the Chinese got it under control at the end of January into February. And way into March… before we went into lockdown, we saw Cheltenham, and I believe 250,000 people attended the horse races at Cheltenham in mid-March. And at the same time in Ireland, which appears to be doing a lot better than us, the St Patrick’s Day celebrations were cut right back.

Instead, Johnson and his cronies decided to flirt with herd immunity, telling us our loved ones would die rather than taking the action needed to stop the spread.

But the UK government would rather rewrite history and blame China. Michael Gove stated on 29 March that:

It was the case … [that] the first case of coronavirus in China was established in December of last year, but it was also the case that some of the reporting from China was not clear about the scale, the nature, the infectiousness of this.

While China is far from blameless in the epidemic and did initially suppress news of the outbreak, the lockdown and the spread of the virus was public knowledge by late January. Italy, meanwhile, reported its first case on 31 January, the same day the UK also reported its first two cases.

The figures from 31 January paint a damning picture of our government’s response to the crisis. For example, Japan had 14 cases on 31 January and Australia had nine. At the time of writing on 16 April, Japan had seen 178 deaths and Australia 63. The death toll in the UK, meanwhile, stands at a horrific and tragic 13,729 fatalities.

These figures don’t improve when looked at in terms of deaths per million of the population. In the UK, this figure is 190. But in Japan, it’s 1, and in Australia, 2. Meanwhile, in Ireland, where King noted measures including cancelling St Patrick’s Day celebrations took place earlier, it’s 90.

Figures showing when measures were taken in different European countries in relation to the third recorded death from the virus also paint a picture of how slow the UK was to respond to the pandemic.

As Ward wrote in her Guardian article:

It’s now clear that so many people have died, and so many more are desperately ill, simply because our politicians refused to listen to and act on advice. Scientists like us said lock down earlier; we said test, trace, isolate. But they decided they knew better.

Oh, but it’s okay, Boris Johnson is out of hospital

While there have been establishment journalists attempting to hold the government to account, that’s limited. The Sun‘s Good Friday headline about Johnson’s release from hospital is perhaps the most despicable example.

On the day that the UK recorded the highest number of deaths in a day of any European country, the Sun published the headline:

BORIS IS OUT (Now that really is a Good Friday!)

Yes, as the UK reeled from the news that a further 980 people had died the day before, the paper wanted us to celebrate the life of the one man whose inaction has added to this death toll.

On 16 April, households across the UK will once again gather on their doorsteps to clap and cheer for carers. While this is good, it isn’t enough. Our carers, our doctors, our nurses, our supermarket workers and our public transport workers all need more than a round of applause. Instead, they’re still underpaid, and they’re still not receiving the PPE they need to do their jobs safely.

As US nurse Emily Pierskalla wrote:

If I die, I don’t want to be remembered as a hero.

I want my death to make you angry too.

I want you to politicize my death. I want you to use it as fuel to demand change in this industry, to demand protection, living wages, and safe working conditions for nurses and ALL workers.

Use my death to mobilize others.

Use my name at the bargaining table.

Use my name to shame those who have profited or failed to act, leaving us to clean up the mess.

Don’t say “heaven has gained an angel.” Tell them negligence and greed has murdered a person for choosing a career dedicated to compassion and service.

These words have just as much resonance in the UK. Everything about this crisis and the way it’s unfolded is political. The people who’ve made the decisions that have cost lives need to be held to account.

We must never forget nor forgive what those in power have done. We must fight for better wages and conditions for all those who’ve kept the country functioning during this pandemic. And we mustn’t let our politicians get away with rewriting history and erasing their role in the spread of this deadly virus.