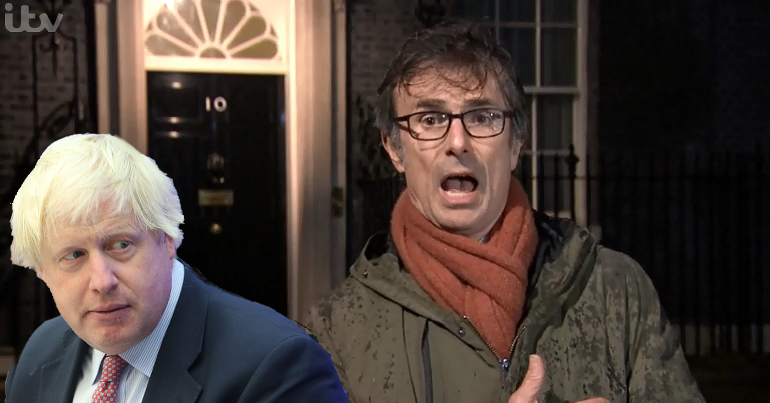 If you thought the BBC was getting more subservient to Boris Johnson, it seems it has nothing on ITV‘s Robert Peston. Because on Monday 9 March, he turned full-on boot-licker in his praise of the PM.

The impact of coronavirus is becoming more worrying by the day. As of 10:00am on 10 March, five people had died in the UK with over 300 confirmed infections. But people are still criticising the UK government’s response. So far, it has not taken steps like closing schools. Politico reported on 9 March:

U.K. health authorities will soon ask people with minor flu or cold-like symptoms to self-isolate for a week to help slow the spread of coronavirus

Also, with the stock markets in chaos, Labour urged Johnson to “get a grip” of the situation. So, you’d think that ITV‘s political editor would want to give a balanced look at the PM’s response. But on the teatime news, Peston may as well have declared his love for Johnson.

I don’t need to say Robert Peston isn’t fit to be a political reporter because he’s a sycophantic Boris fan boy, I just ask you watch this… pic.twitter.com/eejHLbA4fN

Boris Johnson [is] working desperately hard, and goodness only knows if he’s managing to sleep at night.

That one statement just trampled on any critical analysis Peston may have given. Not least because Johnson “working desperately hard” is a pure matter of opinion. And moreover, some may question whether anyone should be concerned about the PM’s sleeping habits. Needless to say, Peston left people on Twitter unimpressed.

Saw it earlier and was struck by the overt sycophancy.

Someone else questioned Peston’s insinuation that we should have sympathy for the PM:

So there's a national catastrophe unfolding and we're supposed to feel sorry for Boris Johnson? Is that a joke?

And this person made an interesting comparison:

That's why I don't watch the news anymore. I can get my information from elsewhere. I don't need some North Korean style toady to tell me what the hell is going on.

But this kind of boot-licking from Westminster political editors is nothing new. Infamously, in 2003 then BBC political editor Andrew Marr famously said of Tony Blair’s invasion of Iraq:

He said that they would be able to take Baghdad without a bloodbath, and that in the end the Iraqis would be celebrating. And on both of those points, he has been proved conclusively right. And it would be entirely ungracious, even for his critics, not to acknowledge that tonight he stands as a larger man and a stronger prime minister as a result.

We all know how the invasion of Iraq ended.

This sycophancy from Westminster journalists possibly stems from their education. Peston went to Oxford university, as did Johnson. Marr went to Cambridge, while Blair went to Oxford. These elite universities help foster the belief that some people are better than others. They also embed the notion of hierarchies, where those at the top should not be questioned, just praised for getting to their positions in life. But equally, as Noam Chomsky noted of Marr, journalists like him and Peston who have that mindset end up rising through the ranks. And the public end up with sycophancy and propaganda:

Neither Peston or Marr’s odious fawning over prime ministers is journalism. It’s subservience of the highest order. But perhaps most damning is that both these journalist failed to hold power to account at times when the public needed it the most.