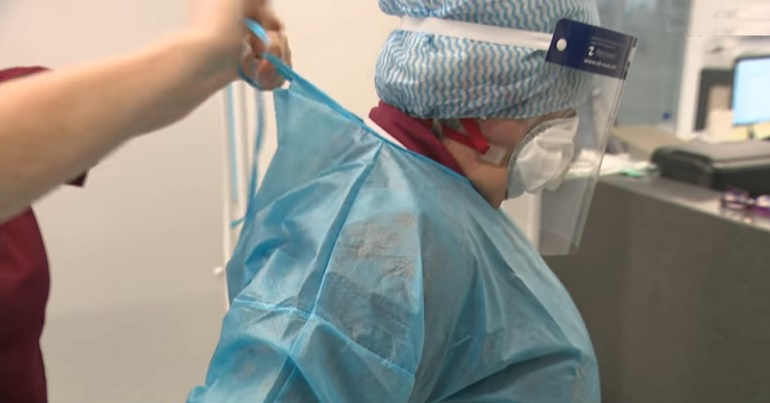 Despite many broken promises, NHS workers still do not have the personal protective equipment (PPE) they need to work safely. Instead of the right equipment, the answer appears to be to rewrite the rules on what’s needed every time there’s a shortage.

As The Canary reported on 17 April:

Thousands of doctors and nurses are concerned about inadequate supplies of personal protection equipment (PPE) amid fears some hospitals could run out entirely this weekend.

We should all be angry and upset about this. But sometimes, if you’re not on the frontline, this anger is almost superficial. It’s not grounded in the reality NHS workers are facing. And this is where personal stories are so important because they hit you in the gut and punch you so hard that you feel sick about the state of the country.

And one heartbreaking tweet from a nurse did exactly that to me today. I’d heard the news; I’d read about the shortages. I knew and was angry about what was happening. But the tears didn’t come until I read this tweet:

Dear @MattHancock – this is my daughter – who I put to bed tonight sobbing and begging me not to work in A&E – her words broke me , “ Mummy I’m only 8 and I need you – I don’t want you to die” #PPEnow #gowns #COVID19 pic.twitter.com/JfI46HFfAE

The nurse continued in a separate tweet, how she just wanted to “reassure my kids”:

I want to be at work – I love my job. I just want to be able to reassure my kids I’ll be safe and protected without lying to them. Surely that’s not too much to ask?

This seemed to be too much to ask for some Twitter trolls, who decided because her bio mentions Labour she was just scoring political points. In a truly pathetic display of the worst of humanity on social media, the nurse even had to defend the picture she’d used in the tweet:

To the nasty trolls. This picture is from 2 months ago – pre Covid – before I left home for my first shift in my new role in A&E, before uniform guidance changed for us. I now scrub myself raw in the shower after work and have stopped sharing a bed with her.

Other people, meanwhile, shared their experiences of the crisis:

'I don't want any of my family to go to Heaven'

My Brother said 'what do you say to that'

Feel 4 you & your little girl these are not worries kids should be having fear 4 their #mentalhealth pic.twitter.com/itWoIOq62l

My 5 year old is the same he said to me he will stick himself to me with glue am just a bus driver and that’s tuff enuff but nhs staff must be so hard your doing amazing job doesn’t cut it much when you have a child in bits .but you are thank you

Don’t you get it? Of course, this is entirely political.

If the original post was heartbreaking, some of the responses are simply sickening. The fact that people want to slam a nurse for being a Labour activist is beyond reprehensible at any time, let alone during the current pandemic.

Moreover, it’s quite simple. This wasn’t a party political post. But everything about how the UK is dealing with the coronavirus crisis is political. From an incompetent waffling government to a decade of cuts to the NHS.

So no, this isn’t a time for political unity. This is a time for continually highlighting and exposing what a decade of austerity has done to this country. Now is obviously not the time for mass protest. But that time will come. And when it comes, none of us must forget or forgive the heartbreak this government has caused.