As the dust settles over the Corbyn and Sanders era, we must remember one crucial reality - Canary 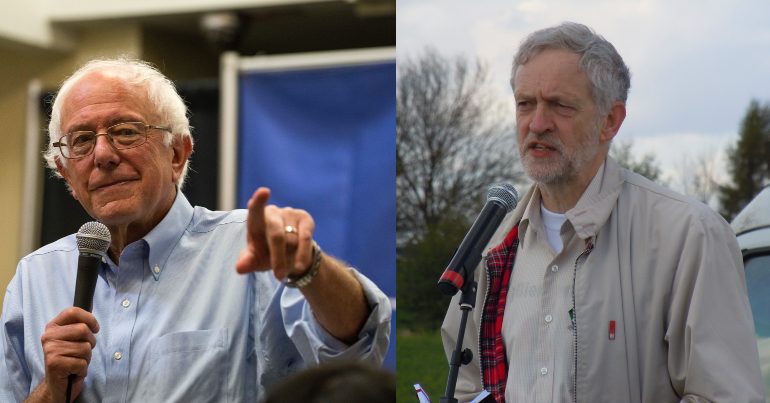 It seemed almost celestially ordained that Corbyn’s term as leader of the Labour Party in the UK and Bernie Sanders’ 2020 presidential run in the US would come to an end on almost exactly the same date. There were multiple similarities between the two men and the political movements they spearheaded. Indeed, Corbyn himself commented that aspects of his 2017 general election campaign drew from Sanders’ ultimately unsuccessful 2016 run for the US presidency.

Of course, we ought not to dwell on our natural disappointment at their failure. But for progressive communicators, in particular, there’s an important reality that we must consistently stress. And it’s that, in spite of the avalanche of scare-mongering by corporate-owned media on both sides of the Atlantic, Corbyn and Sanders’ proposals weren’t actually all that radical.

This might seem like a deliberately provocative statement, and admittedly some clarification is in order. Corbyn and Sanders’ proposals certainly would have radically transformed US and British society. But that’s not because they were intrinsically radical. Rather, these ideas are only radical when set in the context of the Anglo-American neoliberal status quo.

Since the neoliberal turn that began in the 1970s and was accelerated by Margaret Thatcher and Ronald Reagan in the 1980s, the political center of gravity has shifted further and further to the right in both countries. This has enabled mainstream media commentators to pass off even modest social democratic reforms as dangerous heresy. The transformation of the respective countries’ traditional centre-left parties into technocratic administrators of neoliberalism-lite (courtesy of Tony Blair and Bill Clinton), meanwhile, has further cemented the false perception that such ideas are some kind of dangerous Marxist fantasy.

But when contrasted with fellow developed countries in continental Europe, it suddenly becomes obvious that almost all of Corbyn and Sanders’ proposals were not only moderate but have already been implemented elsewhere – and usually with great success. In the case of nationalized railways and utilities, for instance, the UK is actually the outlier in Europe. France, Germany, Spain, and Switzerland all have largely publicly-owned and operated rail systems. Far from presiding over failures, these systems consistently provide customers with cheaper fares and higher levels of customer satisfaction. In the Netherlands, meanwhile, both water and electricity provision along with its natural gas network are all publicly owned.

Continental European countries that have enacted greater levels of social democratic reform also tend to have healthier and more prosperous societies than the US and UK. In the 2019 World Happiness Report – which in spite of its name studies well-being across diverse criteria – Finland, Denmark, Norway, and Iceland took the top four spots in the ranking.

Along with neighboring Sweden, which also tends to fare well in such studies, these Nordic countries have implemented the most extensive social democratic reforms of all Western European nations. And the reason for their success is simple – such policies promote human welfare by providing social protections and access to public services.

The success is palpable

Even those of Corbyn and Sanders’ policies that have been dubbed the most extreme aren’t that controversial in some continental European countries. Their idea to pass laws allowing for worker representation on the boards of large companies, for instance, has already been a part of German labor law for decades. Known as ‘co-determination’, this arrangement is now accepted across the political spectrum in Germany and supported by both the centre-left Social Democratic Party and its centre-right rival, the Christian Democratic Union.

Far from decimating industry by leading to ‘unreasonable union pressure on wages’ – as right-wing pundits hysterically claim to be the inevitable result of such reform – Germany has for decades, in fact, been the economic powerhouse of Europe. While it has enjoyed successive years of trade surpluses and built a thriving manufacturing sector, the supposedly ‘pro-business paradises’ of Britain and the US have suffered from years of ballooning trade deficits and rampant deindustrialization across their manufacturing heartlands.

It now sadly looks increasingly likely that Keir Starmer and Joe Biden will throw the legacy of the Corbyn and Sanders eras onto the trash heap and lead their respective parties back to the dark days of neoliberalism-lite. If they do so, we must never forget that this is not – as they surely will cynically claim – a necessary sacrifice for the sake of electability.

Rather, it’s the result of a protracted process of rightward drift orchestrated by establishment forces within the Labour and Democratic parties, along with fear-mongering and a deliberate dampening of expectations by their minions in the corporate-owned media. And this is ultimately why Corbyn and Sanders were smeared with ridiculous media narratives that falsely claimed their policies would lead to some kind of apocalyptic economic meltdown, in spite of the overwhelming evidence from continental Europe that that’s patently not the case.

Two questions now confront those who wish to continue carrying the torch for progressive change in the US and UK. First, we must consider how we can break the Catch-22 situation in which media reform is simultaneously a prerequisite to giving the left a fair hearing yet also impossible unless we gain power in the first place. Second, we must re-evaluate whether working within the confines of the established centre-left parties is still a viable strategy or whether entirely new party structures are necessary.

Given the flagrant and uncompromising attacks and obstruction against Corbyn and Sanders from establishment forces within their own parties, the spectre of needing to start afresh must surely occupy the minds of all those who desire real change.