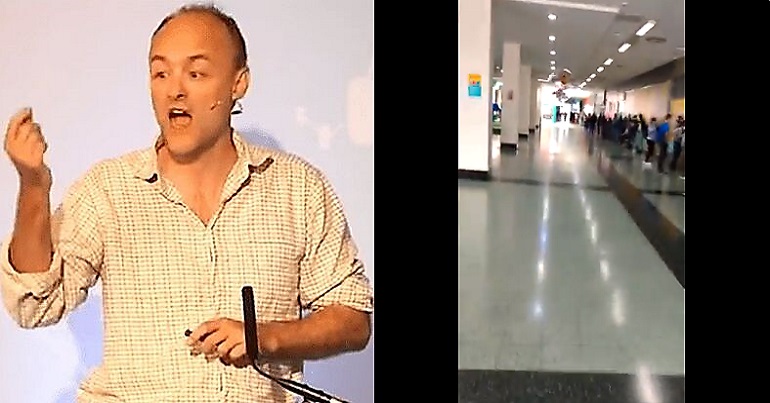 The so-called ‘Westminster bubble’ and Twitter users are continuing to obsess over the Dominic Cummings ‘driving to Durham’ scandal. But while it goes on, a charity shared a short film on social media. And it sums up why, away from the privileged quarters of the media and some on Twitter, the Cummings story might not matter to many people.

The Cummings scandal: back in the real world

The Independent Food Aid Network (IFAN) tweeted a video of the queue for a foodbank:

The number of people queuing, just on one day, is staggering – but sadly not surprising. Because it seems the pandemic has just entrenched a problem that was already a scourge on the UK.

Foodbank provider Trussell Trust said that in 2018/19, as many as 3 million food parcels were given out by all UK foodbanks. Moreover, the Trussell Trust alone gave out over 800,000 food parcels between April and September 2019. This was a 23% rise on 2018.

Since coronavirus (Covid-19) hit, foodbank providers have reported a surge in the number of people needing support. The IFAN, for example, saw a 17 times greater demand for support than in the same period last year. And as the Observer reported, nearly a fifth of households with children did not have enough food to eat in the five weeks leading up to May. It also noted that:

of the 621,000 children who were accessing free breakfast clubs before the pandemic, only 136,000 are being provided with an alternative. However, 31% of children entitled to free school meals are still not getting any substitute, leaving more than 500,000 children going without.

These figures are damning – but they’re also damning in terms of the Cummings story. Some people will be rightly angry that while they’ve been struggling to feed their children, or care for them while they’re sick – the PM’s top aide can just do what he wants. For some, there’s a stark arrogance and hypocrisy in Cummings’ actions and the government’s response.

But the queue for the foodbank in Elephant and Castle represents a bigger point about the whole Cummings scandal. And it’s that the storm over his actions is, for many people in the UK, just a Westminster and Twitter ‘bubble’.

Ultimately, many poor people probably don’t care about the Cummings story. I can confidently say that if I went around my council estate, most people wouldn’t know who he is. And most of my neighbours would probably say ‘you think I’ve got nothing better to worry about?’. One person I spoke to knew his name but thought he was an MP. And this is someone who’s very politically engaged to the left. My estate, by the way, is in the top 5% for child poverty; top 4% for elderly people poverty; and top 10% for overall income poverty.

This is not because poor people are ‘stupid’, don’t care about politics or don’t have well thought-out opinions. It’s because most of us rarely have the privileges of time, money and education that allow you to be politically engaged. But we do know the difference between right and wrong.

Ethnographer and working class academic Lisa McKenzie wrote a piece for the London School of Economics (LSE) blog about the poorest people voting ‘Leave’ in the EU referendum. As she summed up:

for most working class people like ‘Sally’… the debates were centred upon the constant struggle of their own lives, and they connected those struggles to their mothers’ and grandmothers’ hardships, but also to their children’s future. They saw little hope that life would become fairer for them. The referendum was a turning point for the women in east London. They had not voted in the 2015 General Election: they had little interest or faith in a political system seated only three miles away when their daily and immediate situation needed constant attention. When ‘Sally’ told me she was going to use her vote for the first time to leave, I asked her if she thought things would change for the better if we were to Brexit. She said she didn’t know, and didn’t care. She just couldn’t stand things being the same.

But moreover, for many of the poorest people, trust in politics, and a functioning society more broadly, have been eroded away to almost nothing.

In her book Getting By, about the council estate in Nottingham where she grew up, McKenzie wrote that people she spoke to:

were clear about feeling powerless, and that their views are not heard; they feel disrespected and demeaned, misrepresented, and ignored, usually through being ‘looked down on’…

There was a real feeling among the residents of St Ann’s [estate] that they had been left behind and were, in actual fact, not wanted.

These feelings of powerlessness, exclusion and worthlessness to broader society (although not to their community, as McKenzie documented) were reflected in the 2019 general election result. Because the reality was that just 53% of people in social grade DE voted. And moreover, of those who did vote in that social grade – the majority voted Tory, not Labour.

As I previously wrote, the Cummings story is not really about the BBC peddling propaganda on his and the Tories’ behalf. Nor is it about him breaking the rules. It’s about inequality and classism:

We live in a society where some children have been going through hell during the pandemic. Others, though, get to travel across the country to be protected from it.

Now, the obsession with the story from certain quarters of the press and social media is about bubbles.

There’s the Westminster bubble, where gossip column journalism reigns supreme. Then there’s the Twitter one where confirmation bias, ‘group think’ and echo chambers are amplified. It’s also a bubble where most people on the platform are politically engaged. But there’s a third bubble. And it’s one that is cyclic, entrapping and all-consuming in nature.

It’s the poverty and classism bubble. The bubble where people’s lives are so consumed by, as McKenzie put, ‘getting by’ that Westminster gossip is a world away from reality. It’s the bubble in which most people queuing for the Elephant and Castle foodbank live. And it’s one where the Cummings story seems irrelevant. Even if it’s one that sums up why they’re in the situation they’re in.

In January 2018 few could deny that the government’s Brexit plans are chaotic. But for working-class people all over the UK, the chaos of the NHS, Universal Credit, social cleansing and housing is their priority. And in truth, the UK’s middle class has been left relatively unscathed by eight years of austerity. Those who don’t fear the shame of the foodbank, or the looming prospect of a job in the warehouse/workhouse for their children – and instead think the crisis is about the colour of passports – should think themselves lucky.

The problem with most bubbles, though, is that they eventually burst. And those people in Elephant and Castle, and others like them across the UK, will not remember the Cummings story after the pandemic is a distant memory. They’ll remember that much of the media and political class (including those on social media) effectively abandoned them again – after decades of already being left to rot. Once that bubble bursts, there’s no telling what may happen. But it could be a day of reckoning for those holding the power in this country. Here’s hoping, anyway.