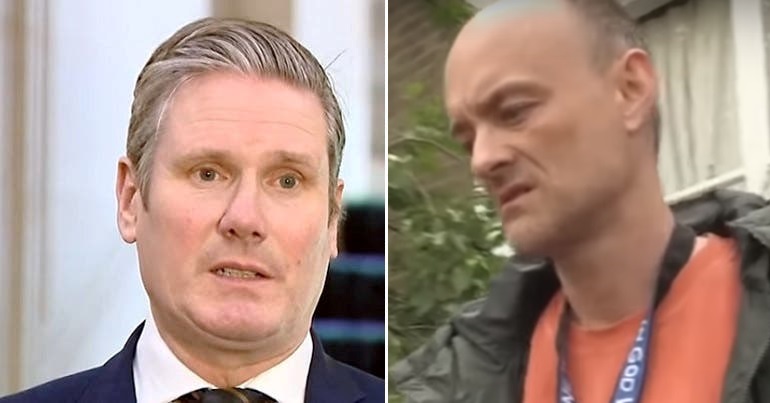 The comments of left-wing Labour MPs, meanwhile, have shown a much better understanding of what people around the country want right now.

Follow the rules. They are there for a reason. #StayHomeSaveLives pic.twitter.com/Wzk3NVj1vN

Cummings, however, now stands accused of ‘breaking the rules‘. And so far, Boris Johnson and other key government figures have rallied to defend him. Cummings has denied wrongdoing and denied breaking the rules a second time. But even some Conservative backbenchers think it’s time for him to go; as do some 41% of Tory voters.

The official opposition stance, though, has seemingly been to demand an ‘explanation‘ rather than a resignation or dismissal. And key members of Starmer’s shadow cabinet have duly avoided openly calling for Cummings to go. In fact, at least one shadow cabinet member actually criticised a protest outside Cummings’s house that highlighted why him flouting the rules was so unacceptable.

Labour’s official posture comes despite around 66% of Labour voters reportedly thinking Cummings should step down. And as one commentator put it, he “is 100% safe” until this position changes; because “no PM will sack his own advisor as long the opposition refuse to call for him to go”.

Labour left-wingers step in to lead

Left-wing Labour MPs, on the other hand, showed real leadership over the Cummings scandal:

We always suspected Dominic Cummings would be a liability for Johnson but after watching #DailyBriefing it’s obvious to even the most loyal Johnson supporter in the Cabinet that Cummings has to go. If he doesn’t it will leave Johnson looking both weak & incompetent.

So @SophyRidgeSky asks the key question “Is saving the job of Dominic Cummings more important than getting people to abide by the lockdown?” #cummingsmustgo

Cummings should have no opportunity to resign.

Like my great comrade Dennis Skinner used to say,

He should be “ booted out like a dog in the night”

If Boris Johnson doesn’t sack Cummings, his message to the country is “one rule for the elite, another for you”. https://t.co/8t7YHoGf1O

Dominic Cummings must resign. Any outcome to this scandal other than Cummings out would be a betrayal of every key worker in this country and every victim of this virus. My full statement: pic.twitter.com/JHQjBaeLYj

I have been contacted by many constituents who are fearful for self-isolating family members that they can’t be with. The actions of Dominic Cummings is a spit in the face of their heartbreak. He is not fit to hold any post within government. https://t.co/l9ifOMgqCe

As the Network for Police Monitoring noted, the government’s ‘one rule for Cummings, another for everyone else’ message has clear repercussions:

Thanks for the clarification. Does this mean your government is cancelling all 14000 lockdown fines this week? https://t.co/zGkKhsYARx

And as the Secret Barrister highlighted, Johnson’s defence of Cummings has implications for anyone charged with breaking coronavirus rules:

Any defence lawyer in court this week now has it from the very top of government: If your client is following “instinct” in breaching the Regulations, the Regulations do not apply, and no prosecution should follow.

Here's what Boris Johnson should do today to restore public confidence in his own lockdown policies.

2. Restate that for public safety the lockdown rules must be adhered to at all times

3. Announce that any minister undermining them will be sacked

The UK has suffered potentially 60,000+ excess deaths linked to coronavirus. And the government’s approach to the crisis has received significant criticism. The Cummings scandal, meanwhile, has made government messaging even more confusing than it already was.

Its very clear public have lost confidence in Govt’s message. Boris Johnson must act quickly to protect lives, otherwise more people will die, in disproportionate numbers, rate of infection will go up. Families will continue to suffer. Dominic Cummings should not be the story

Its not right for Dominic Cummings a key advisor to Boris Johnson to flout #Coronavirus rules set by the Govt itself.

Throughout #COVIDー19 outbreak, many have died; are infected; are living in poverty, are facing inequality, are missing their families, this should be our focus

Government support for Cummings has seriously damaged public trust in its message. And amid a crisis that has already devastated so many lives, further confusion is utterly unacceptable. We all deserve so much better – and we need to start demanding it.