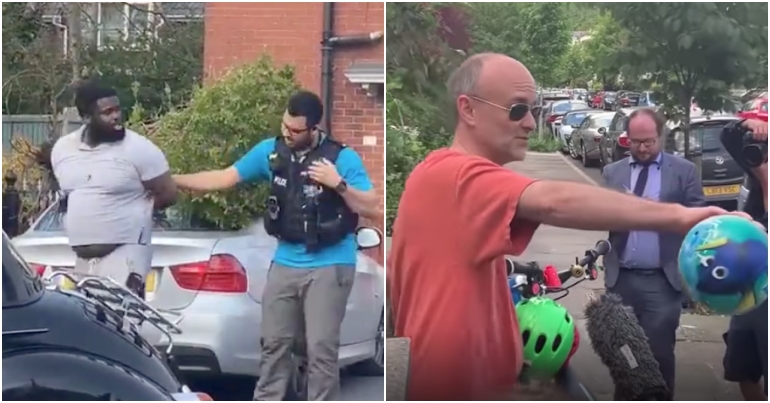 The indignation and downright rage at Dominic Cummings’ actions isn’t going anywhere. And nor should it. People across the country have seen loved ones die alone, cared for children while sick, and been unable to see their families. We have all taken action that goes against our instincts. And we’ve taken that action for the greater good. It’s because we’ve wanted to control the coronavirus (Covid-19) pandemic that the majority of us have followed the rules. Because the majority of us can work out that it’s not about what’s right for us, it’s about what’s right for society as a whole.

Cummings might deny that he’s done anything wrong or broken any laws. He might not have any regrets. He may think that he took the steps any reasonable parent would – well any reasonable parent who had a whole separate house to travel to on a family estate might take (yep – hands up who that applies to!). However, outside of cabinet members and Daily Mail commentator Dan Hodges, it’s hard to find anyone who agrees with that analysis.

But while Cummings was taking his jaunt to Durham, let’s take a look at what police across the UK were doing on those days. Because they clearly show that there’s one rule for the elite and another rule for the rest of us

When the new coronavirus powers were introduced, the Network for Police Monitoring (Netpol) and the Undercover Research Group (URG) set up an online diary to:

monitor the everyday impact of the new policing powers and whether they are used proportionately.

And policing has been extreme, and in some cases distressing and horrific. For example, a Black man was tasered in front of his young child at a petrol station in Manchester. As the Guardian reported:

Shortly after he puts the child, who can be heard screaming “Daddy” throughout the footage, on the ground, the man is Tasered by one of the policemen.

Here are some examples from the Policing the Coronavirus blog of actions the police took against individuals during those dates. And it’s important to remember that these actions weren’t even taken against symptomatic people or those from symptomatic households as Cummings was. Some were even taken against key workers:

In West Yorkshire, Netpol reported that it had been informed police officers had yesterday stopped two care workers, both in their uniforms, who were sharing a car on the way to work a 12-hour shift together at an old people’s home. The driver was fined £60. The two-metre social distancing rule cannot apply to them, as many residents they support require two carers.

Meanwhile, in Lancashire, during the weekend of 28-29 March, police issued 123 fines, and police in Warrington:

fined six people over the weekend, including for being ‘out for a drive due to boredom’ and ‘multiple people from the same household going to the shops for non-essential items’.

A man with a history of mental health problems [has] been ordered to pay a £500 fine, £85 prosecution costs and a £50 victim surcharge after he refused to obey coronavirus lockdown restrictions.

Police were out in force to ensure the rules weren’t broken during a sunny bank holiday weekend. And while Cummings took a drive to test his eyesight (and really, this ludicrous and dangerous excuse is beyond words) this is how the police were enforcing the lockdown.

In Manchester, a man was violently arrested for the crime of “taking a tree from his mum’s house”:

Greater Manchester Police officer making an arrest because someone had "broken the rules" for taking a tree from his mum's house pic.twitter.com/IpCvBl8mTJ

And the day before Cummings sat on a bench in Barnard Castle, in Glasgow:

a disabled woman returning home very heavy groceries was threatened with a fine for sitting down to rest because she “wasn’t exercising”.

While Johnson claims that Cummings was following his “instincts” as a father, this is allegedly what happened to a woman feeding her baby. Sussex police deny this incident took place:

"She was told to stop feeding her baby while out walking in the park as " it's not essential or exercise" pic.twitter.com/4OoxbOEqLv

in Hampshire while resting during a cycle ride, using a gated communal garden outside their block or driving to a park with a baby.

police had to issue an apology to a disabled man for [a] ‘misunderstanding’ over gardening after his friend was threatened with a fine for helping him, despite the government advice specifically listing support for vulnerable people as a reason to leave home.

The letter of the law is often wrong, misguided, or misleading, whether it’s coronavirus or any other aspect of the legal system. This isn’t a piece arguing that we should all always follow the rules or that there was any justification in the police’s actions. In most of the cases in this piece, their actions were at worst unlawful, and at best misguided and overreaching. And in the case of coronavirus, most of us follow the rules because, however difficult, it’s the right thing to do, not because we’ve been coerced by the state to do it.

But that’s not the point. The point is this is how ordinary citizens, those of us not part of the ruling elite, have been and are being treated. Cummings showed pure arrogance in taking the trip. And in not even apologising, let alone resigning, he’s displayed breathtaking contempt for every single person who has acted not in their own best interests but in the interests of society as a whole.

However, we shouldn’t be surprised. It’s a clear manifestation of the contempt Conservative-led governments have treated us with for over ten years. After all, this is a party that punished the poorest people in society to bail out the richest. It’s a government that instituted a policy of austerity that a report found caused at least 130,000 deaths.

Self-interest is at the heart of Conservative government policy. This has always been clear. Cummings’ actions are just the latest in a long line of government actions that benefit the elite while giving a giant fuck-you to ordinary working people.

The Tories have been fighting a class war against poor and vulnerable people for years. This latest incident is just a stark reminder of exactly how ruthless they are. The question for the rest of us remains the same – what are we going to do about it?