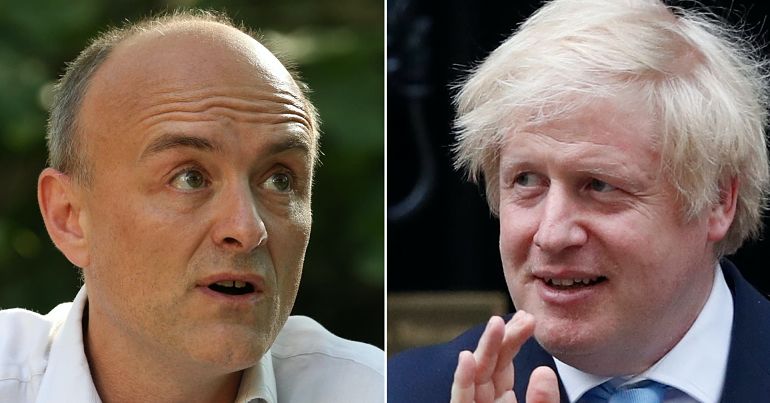 Boris Johnson has been hit with a ministerial resignation and faced mounting backbench anger over the actions of his senior adviser, Dominic Cummings.

Douglas Ross, the parliamentary under-secretary of state for Scotland, said on Tuesday that he was quitting after hearing Cummings’ efforts to defend his trip from London to Durham despite the coronavirus lockdown.

The first resignation over the allegations rocking the government came as Cabinet Office minister Michael Gove sought to defend his longstanding ally as having acted in an “entirely reasonable” way, and within the law.

But Ross, the MP for Moray, said: “I have constituents who didn’t get to say goodbye to loved ones; families who could not mourn together; people who didn’t visit sick relatives because they followed the guidance of the government.

“I cannot in good faith tell them they were all wrong and one senior adviser to the government was right.”

Downing Street insisted the PM had not split the government by backing Cummings amid concerns over how the decision will affect the public, police and health workers during the pandemic.

But communities secretary Robert Jenrick told BBC Radio 2 that his own postbag showed “many people still disagree” with Cummings’ actions and could not rule out further ministerial resignations.

There was fury on the Tory benches as MPs reflected on the correspondence they had received from constituents.

Simon Jupp – a member of the 2019 intake – suggested that Cummings should consider his position, saying he has felt “anger, disappointment and frustration” during the “deeply unhelpful distraction”.

Former chief whip Mark Harper said Cummings “should have offered to resign, and the prime minister should have accepted his resignation”.

Ex-minister Stephen Hammond said: “Public adherence to the rules is achieved by consent in this country and that is made much harder if people feel it is one rule for them and another for senior government advisers.”

“We cannot throw away valuable public and political goodwill any longer,” he said.

In an extraordinary press conference in Downing Street’s garden on Monday, Cummings argued that his journey to Durham in March was justified as he sought to protect his family’s health.

But many questions remained unanswered, including over his subsequent drive to Barnard Castle which he said was to test his eyesight after it was affected by Covid-19.

Downing Street declined to answer numerous unresolved queries, but Gove said the journey, some 25 miles from where the aide was isolating, was “completely appropriate” because he was “preparing to return to work” by checking he was safe to drive the long trip back to London.

“It’d have been entirely within his right to return to work that day on the basis of the advice he had been given, that’s my understanding, so that drive was completely appropriate,” Gove told BBC Radio 4’s Today.

And he suggested that Cummings’ trip to Barnard Castle “certainly appears to be against the Highway Code – it’s not the way to test your eyesight, and put potentially other people in danger”.

Experts at the Royal College of Ophthalmologists and Moorfields Eye Hospital said there was little evidence to link Covid-19 to eyesight problems.

Some 71% of Britons believe Cummings broke the lockdown and 59% think he should resign, according to a snap poll of 1,160 adults by YouGov after the aide’s defence, which suggested his statement had turned public opinion further against him.

– Some patients admitted to hospital with Covid-19 are to be given access to the drug remdesivir, which has been shown to shorten recovery time;

– Ryanair said it would increase flights to 40% of its normal schedule from 1 July;

– Health officials sent out a rallying call to Covid-19 survivors to donate their blood plasma as part of a trial to see whether it could be used as a treatment for patients.

The political storm surrounding Cummings’ press conference in Downing Street’s garden overshadowed Johnson’s announcement that all shops in England will be able to open next month if they can protect shoppers and workers.

Cummings said he and his wife, the journalist Mary Wakefield, drove to Durham to stay in a cottage on his father’s farm because of concerns about childcare for their four-year-old son if they were incapacitated by coronavirus, and also over fears about safety at their London home.

He declined to apologise and said he did not regret his actions.