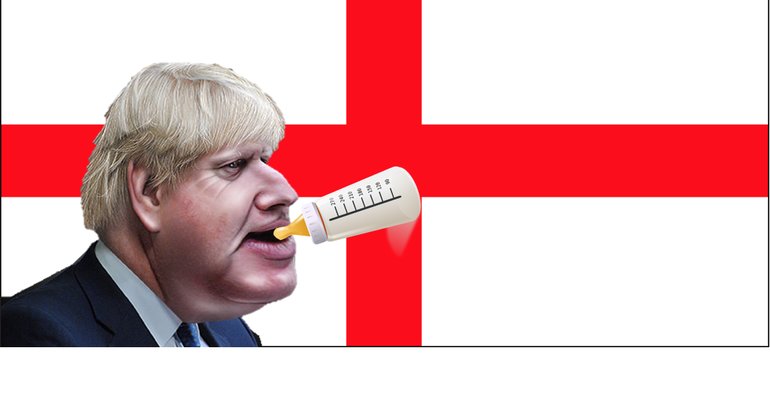 The highest coronavirus (Covid-19) death toll per capita in the world so far, together with one of the highest infection rates, but England is abandoning lockdown. And without the necessary safeguards in place for any rational adult to even consider it if they have the option. Nevertheless, a significant number of English people are carrying on regardless as a second, more devastating wave looks all but inevitable. The devolved nations of the UK, along with many other countries around the world, look on in confused horror. Why are the English committing mass suicide? Years of hyper-individualisation, and the normalisation of the devastating costs of late-stage neoliberal capitalism, have de-civilised England. Decades of infantilisation have left England a nation of children.

One of the most liberating aspects of adulthood is the ability to act in concert with our intentions. We want to be a decent person; but we also have jealousy, defensiveness, fear, insecurity, and other barriers to being that at all times. Adulthood is a quest to understand, master and ultimately liberate the self. The outcome is an adult; a person capable of connection, empathy, endurance, respect, acceptance, patience, and so much more. Even when tested.

Age is not the issue. This is a process, and a 15-year-old can be further down this road than a 55-year-old.

We learn that our wants and needs don’t always come first, but also that it’s important for us to understand and advocate for them. We come to understand that there is more that connects us to each other than separates us; we abandon judgements over superficial things like class, ethnicity, religion, gender identity, or sexuality. And we learn to appreciate the impact of our actions on others, and to take responsibility for that.

There will be painful lessons along the way that teach us these things. But the lessons are invaluable nevertheless. And no adult really wishes they were a child again. Because they retain their childlike wonder for the world, coupled with the privilege of exploring it freely as an independent person. This is the privilege of adulthood.

But for some, unwilling or unable to do that work, childhood retains its allure. They see blind obedience to the higher-ups, the abdication of responsibility for our shared home, and the liberty to nurture (rather than challenge) their prejudices, as true freedom. It’s largely that group which put a manbaby in charge of Britain in December 2019, and which is currently dragging England into an unthinkable wave of death and destruction.

To quote every exhausted parent in history: ‘if you don’t want to be treated like a baby, don’t act like one’.

Expecting a virus to act at your convenience is childish. Violating lockdown rules because you’ve just had enough is childish. Sitting on a crowded beach complaining about the crowds is childish. And walking off a cliff edge because all your friends are doing it is childish.

As Dr Gabor Maté expertly put it, neoliberal capitalism has created a population of “hungry ghosts”: empty, alienated consumers, frantically purchasing and devouring in the hopes of satisfying a hunger that never ends. For them, lockdown was like going cold turkey. Suddenly unable to mask reality with trips to the shops, cinema, restaurants, friends’ houses, and so on. We were forced to sit in reality, all together, separately. For some, it was an awakening. For others, they wanted nothing more than to go back to sleep. And they would take any opportunity, however obtuse, to do so.

And so neoliberal capitalists turned all the pretty lights back on and told everyone everything was fine. We could all get back to normal. All while every scientific indicator told us the exact opposite.

Do Boris Johnson, Dominic Cummings and this parasitic clusterf*ck of a ‘government’ bear responsibility for this? Absolutely. But they are not alone. Decades of hyper-individualisation, and the hyper-normalisation of neoliberal capitalism’s detrimental impacts on our society made this moment possible.

For many, this disaster has clearly been our trajectory for decades. It was clear that neoliberal capitalism was in crisis, and unwilling to be replaced by something more workable. And so its failures had to be ignored, minimised, or blamed on something else. ‘Immigrants’, a ‘bloated’ public sector, ‘too many skivers’ (but only among the working class, of course).

Four million children living in poverty, normalised. Astronomical rises in homelessness, normalised. People starving to death while the government refused to grant them the benefits to which they were entitled, normalised. Millions of others reliant on charity foodbanks to eat, normalised. 120,000 sick and disabled people dying because of cuts to health and social care, normalised. All while the rich got richer.

While bailiffs are bashing in the doors of desperate benefit claimants over a few quid, billionaire companies like Amazon are permitted to pay zero tax. This normalisation of selfishness and corruption has consequences. There are two entirely different sets of rules in operation. One for the haves, one for the have-nots. And that iniquitous status quo has been normalised too.

I’ve seen good friends, otherwise decent people, literally shrug indifferently about these injustices. ‘It’s bad,’ they’d say, ‘but what can we do? I mean, I just try to get on with my life and leave the politics to the people who know what’s going on.’ And I would stand there in shock. Who did they expect to clean up the mess? Mummy and Daddy? We are the adults. It’s our job to pay attention, and our duty to act.

Why aren’t English people rioting in the streets over government failures? Because, among other reasons, too many have been infantilised to the point where they simply aren’t active participants in our already-defective ‘democracy’. And so that system is on a ventilator too.

As we are witnessing in the United States, the tipping point, when it comes, will be sudden, violent and chaotic. We missed the chance for a peaceful transition of power with the destruction of Jeremy Corbyn in the UK, and Bernie Sanders in the US. In both nations, ‘liberal’ centrists chose to enable fascism, rather than socialism. And we are now paying the price for that betrayal – one repeated throughout history. Change will now have to come from the bottom, and it will not be a pretty process.

People are going to be forced awake by what will in all probability be a truly devastating wave of death.

Wales, Scotland, and the north of Ireland have all severed ties with England’s collective cliff jump. The devolved nations are going their own way. In all likelihood, a precursor for the dissolution of the United Kingdom.

And then England will be left alone, to reckon with itself.

It’s time to put away childish things. England needs to be wrestled back from the grip of the zealots willing to burn it to the ground in pursuit of the last quid they can extract from it. And for that to happen, the sleeping need to wake, and the children need to grow up fast. Because it’s happening whether they feel like it or not.