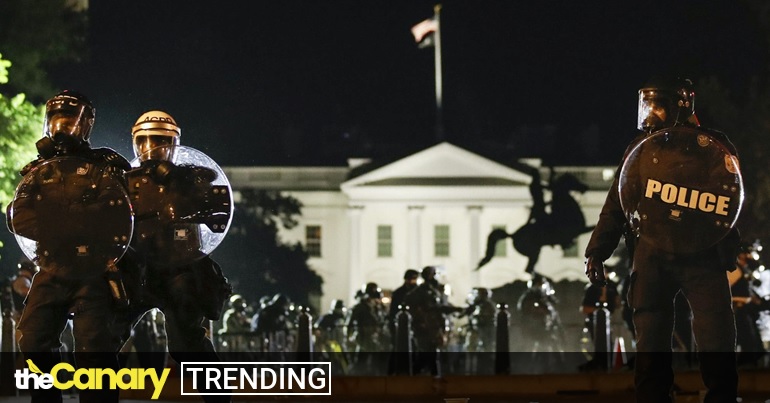 Trigger warning: this article contains video footage of police brutality that some readers may find disturbing.

Donald Trump was rushed to a White House bunker on Friday by Secret Service agents as hundreds of people protesting the police murder of African-American civilian George Floyd gathered outside the mansion. This came as many thousands of people took to the streets around the US to protest against police brutality.

Chants from protesters in Lafayette Park could be heard all weekend, and Secret Service agents and law enforcement officers struggled to contain the crowds.

The outrage following Floyd’s murder came just weeks after a video showed the lynching of another African American, Ahmaud Arbery, and after police in Louisville shot African American Breonna Taylor dead in her home in March.

There are currently curfews in many cities around the US, and thousands of National Guard troops have been deployed in at least 15 states.

Police officers around the US, meanwhile, have faced accusations of the very type of harsh and excessive treatment at the heart of the unrest – including against dozens of journalists.

In Fort Lauderdale, Florida, for example, an officer was suspended for pushing a kneeling woman to the ground during a protest; and two Atlanta officers were fired after smashing in the window of a car and using a stun gun on its two occupants:

This is what started the uproar in Fort Lauderdale… so fucking uncalled for. makes me sick. pic.twitter.com/H6mQtlY0Yl

this is so wrong.. they’re pigs pic.twitter.com/aWebYvhMy2

In Los Angeles over the weekend, a police SUV accelerated into several protesters in a street, knocking two people to the ground. In New York, meanwhile, the police commissioner said about six incidents were being investigated by the department’s internal affairs bureau, including a weekend confrontation in Brooklyn in which two police vehicles appeared to plough through a group of protesters. In another incident, an officer pointed a gun at protesters, drawing condemnation from the mayor.

There are numerous further allegations of brutality too:

Protests started in Erie.. a girl here was peacefully protesting, after 15 minutes she was maced and kicked.. #PoliceBrutality pic.twitter.com/nC6HhXMpCe

This was in Seattle, his partner had to physically move the knee off the guys neck #riots2020 #GeorgeFloydProtests pic.twitter.com/7zd94oZpqd

Not sure this is the way to rebuild trust after one of your officers murders someone pic.twitter.com/7ybjzwI2rT

The scale of the protests has rivalled the historic demonstrations of the civil rights and Vietnam War eras. At least 4,400 people have been arrested.

As one commentator tweeted sarcastically:

as we all know, the best way to stop mass civil unrest over police brutality is with more police brutality. this is totally the kind of thing that won’t backfire. glad we have buck sexton on the case. pic.twitter.com/UHRO32vKqT

In hard-hit Minneapolis, meanwhile, thousands marching on a closed motorway were shaken when a tractor-trailer rolled into their midst. No serious injuries were reported, and the driver was arrested on suspicion of assault.

"I don't want nobody to change the narrative and say it was anything else but peaceful. They tried to kill us." Activist in #Minneapolis after a tanker truck drove into thousands of people pic.twitter.com/2s2iq3GPX8

The officer responsible for Floyd’s death has now been charged with murder. But protesters are demanding that three other officers at the scene be prosecuted too. All four were fired.

As cities burned night after night and images of violence dominated television coverage, Trump’s advisers discussed the prospect of an Oval Office address in an attempt to ease tensions. But the notion was quickly scrapped for lack of policy proposals and the president’s own seeming disinterest in delivering a message of unity. For example, he has worryingly turned the focus of his anger on anti-fascists (‘Antifa’):

Trump considers the people whose most obvious political commitment is to ***oppose fascism*** as ‘terrorists’. Tells you everything you need to know about whose side he’s on in that battle.#TrumpIsAFascist https://t.co/7myziAgUZc

So how do I go about explaining to my kids that the President now wants to put me in jail for being anti-the ideology that murdered 6,000,000 of our people

So everyone's clear. ANTIFA does not exist as an organisation. There are antifascists, though, and there is antifascism. Trump wants to to criminalise protests against racism and his government as terrorism, because any protester can be labelled 'ANTIFA'.

Antifa is a movement.

We're not an organization & have no leaders. Simply, we stand against fascism.

They rely on your ignorance. They try to make you fear us, bc they uphold the fascist systems that we threaten.

If you aren't anti-fascist, then ur pro fascist.

reminder: supporters of Donald Trump have committed dozens of murders and acts of terrorism over the last few years while antifascist activists have committed none

During a conversation with state governors on 1 June, meanwhile, Trump reportedly urged them to “dominate” the people protesting.

With this kind of rhetoric, it seems unlikely that tensions in the US will go away any time soon.