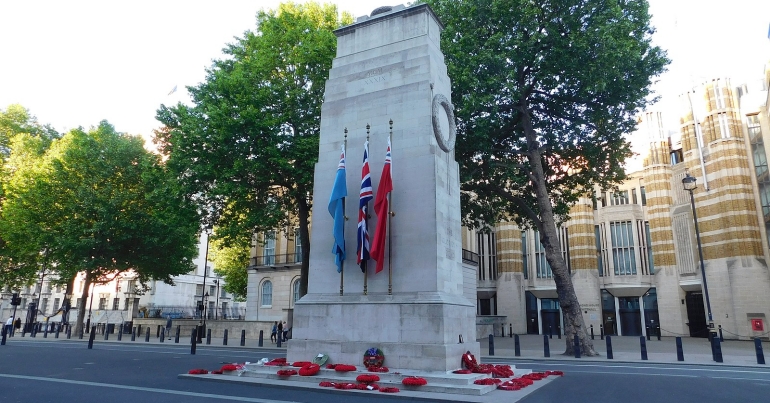 Penny Mordaunt is the latest government minster to express outrage over vandalism at the Cenotaph. But Mordaunt has gone a stage further in ludicrous and dangerous ideas for dealing with those causing damage: she wants to send people to battle camps alongside the armed forces.

Politicians on all sides are engaged in the faux outrage and dangerous posturing that is pandering and emboldening the far right. We mustn’t let this be used as an excuse to clamp down on protest and introduce draconian legislation.

For as long as I can remember, every few years, there’s an issue that causes things to kick off. Generally, a combination of fucked up government policy, fuelled by excessive violent policing, leads to rioting on Whitehall and damage to the Cenotaph and other statues. Politicians and the establishment media express outrage. The stone gets scrubbed. And the clock gets reset.

In 1990, during the Poll Tax riot, the Cenotaph was redecorated and a flag burned.

During the May Day protests in 2000, once again the Cenotaph was targeted. Protesters adorned Winston Churchill with a turf green mohican and sprayed red paint, symbolising blood, coming from his mouth. Then-PM Tony Blair visited the Cenotaph and expressed his “contempt”. The home secretary at the time, Jack Straw, stated:

What was witnessed in central London yesterday was criminality and thuggery masquerading as political protest. In our democracy, there is neither reason nor excuse for such appalling behaviour.

Fast forward to 2010 and it was the student protests kicking off in Whitehall. And yes, once again, the Cenotaph and Winston Churchill came under attack. As the Daily Mail moaned at the time:

They defiled a statue of Winston Churchill by urinating on it, ripped flags from the Cenotaph ­– the nation’s sacred memorial to those who died in the name of liberty – then lit fires and sprayed slogans on the ground in the shadow of the Houses of Parliament.

Yes, it might not be the most effective means of protest – but you could almost say it’s a protest tradition. And ultimately, no lasting harm has occurred to what are in reality just bits of stone.

There’s also a wider question that needs addressing when looking at the moral outrage generated from damaging the Cenotaph. Politicians – yes, the actual people whose policies and actions are being targeted by the protests – are always quick to express their disgust and their contempt. But it’s these same politicians who are disrespecting the dead and disrespecting the sacrifices made in wars.

Every year they line up to lay their wreaths on Remembrance Sunday – Labour and Conservative. Government after government that’s fuelled the arms trade and/or backed deadly, unnecessary and sometimes illegal wars. Politicians with the blood of children across the world on their hands gather for a photo op, looking dignified and sombre. The original remembrance message of “never again” has been distorted and twisted. Never again. But only never again for white people. It’s apparently fine to do it again and again if we’re bombing Brown and Black people, or if the UK can profit from arming dictators and war criminals.

It’s this that should engender our contempt and our disgust. Whether it’s the Cenotaph or other war memorials, yes we should respect the dead. Yes, we should respect the sacrifice. But that respect doesn’t come through glorifying war. It comes through building a better world: a world where we’re not fuelling and encouraging wars.

Generally after such damage, there’s the outrage, a couple of prosecutions and then everything goes quiet. But this time, a dangerous combination of racism and a far-right presence on the streets that’s been gathering pace for years is dangerously erupting. And it’s being fuelled by politicians like Mordaunt.

Even in Cornwall, a peaceful Black Lives Matter protest was hijacked by a small group claiming they were protecting the war memorial. But there was no threat to the war memorial there. No-one wants to touch local war memorials. The far-right is using this as an excuse to vent their racist frustration at the fact that Black people are speaking up and calling out the structural racism that has never been addressed in this country.

Watching the statue of Edward Colston coming down was a beautiful and powerful moment. The waves of this effective piece of direct action are being felt across the world. These statues need to be torn down. As Afroze Fatima Zaidi wrote in The Canary:

This is because demanding the removal of statues of racist figures, including Churchill, is actually about not wanting to ‘photoshop’ history. It’s about demanding that we acknowledge Britain’s racist colonial past, and the people it harmed. It’s about removing the label of ‘hero’ from someone like Churchill who is guilty of a number of heinous crimes against People of Colour, including, but not limited to, genocide.

The protests that are happening at the moment are urgent and necessary. If they weren’t, they wouldn’t be happening in the middle of a pandemic. But we already have a government that’s itching to crack down on protest and has been since the Extinction Rebellion protests last year. The threat of damage to war memorials is being used as an excuse by the government and the far-right. And we mustn’t let either of them manipulate the narrative to force us off the streets.

Featured image via Wikimedia/Paul the Archivist