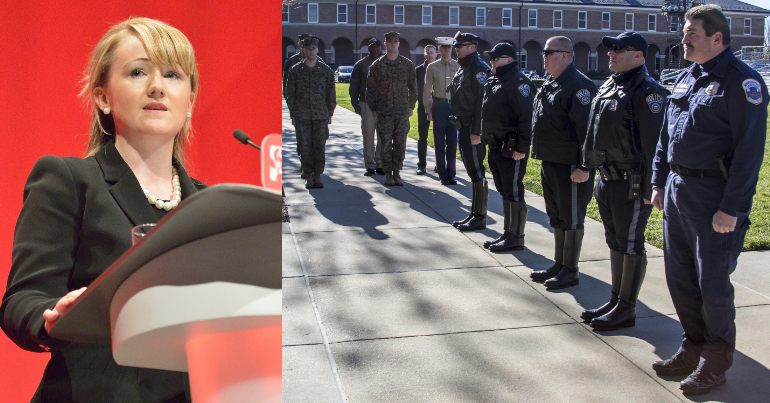 27 comments
Support us and go ad-free

New Labour leader Keir Starmer recently sacked Corbyn protégé Rebecca Long-Bailey from Labour’s front benches. She was dismissed for the ‘offence’ of sharing on social media an interview published in the Independent that touched on the police killing of George Floyd in the US.

In the interview, actress and activist Maxine Peake commented that US law enforcement learned tactics such as those used on Floyd from training provided by the Israeli military. These comments were subsequently dubbed an “antisemitic conspiracy theory” by the usual suspects from the smear campaign against Jeremy Corbyn, in which bogus accusations of antisemitism were used to derail his leadership of the party and chances of becoming prime minister.

We need to be clear: Long-Bailey’s sacking was completely unjustified. And the comments she supposedly endorsed in the first place don’t seem quite so outlandish after closer examination.

On 24 June, Starmer announced that he had sacked Long-Bailey from her position as shadow education secretary. He claimed that the interview that she had shared online contained an ‘antisemitic conspiracy theory’. Long-Bailey had earlier apologised for sharing the article containing the Peake interview.

But apparently, even engaging in this grovelling self-flagellation wasn’t contrition enough. Starmer seemingly caved to pressure and dismissed her from the front bench nonetheless. Before long, Zionist groups were openly gloating over the move and hailing it as representing a ‘new era’ for the Labour Party. In spite of figures from the left of the party expressing their outrage over the matter, Starmer subsequently said defiantly that he “stands by” his decision.

To be clear, Long-Bailey’s sacking would have been a scandal even if the accusation against Peake had any truth to it. Because the complaint against Long-Bailey was a transparent politically motivated attack based on ‘guilt by association’.

But the real irony, seemingly missed amidst all the phony outrage, is that Peake’s claim that US police forces learned to kneel on people’s necks to restrain them from the Israeli military isn’t that far-fetched. While the Independent retracted the claim, and Israel denied this tactic was taught in its training, two facts remain: many US police forces have been trained by Israeli staff and the tactic used on George Floyd is commonly used by Israeli forces. Whilst there may not be direct evidence that this manoeuvre was part of the US training, examining the details behind these facts makes Peake’s initial claim look less and less like a conspiracy theory.

The long history of Israeli training of US police

Israeli forces have been involved with training US law enforcement for years, if not decades, including in the country’s own capital city. In 2016, Amnesty International reported that Washington DC’s police department had been flown to Israel to receive training along with others from at least 12 other US jurisdictions. Then, in 2017, the Intercept reported that Morgan Kane, the commander of DC’s police department, had gone to Israel to attend the Anti-Defamation League’s so-called ‘National Counter-Terrorism Seminar’ in September 2017. The article adds:

More than 200 law enforcement executives from over 100 departments in the US and abroad, immigration enforcement agencies, and even campus police have participated in the ADL program since it launched in 2004.

As far back as 2008, Washington DC-based activist David Schwartzman (who is himself Jewish) gave testimony at a meeting of the Council of the District of Columbia (the city’s legislature):

In 2005, Cathy Lanier, now [Washington DC’s] Chief of Police, and others in the [DC police] force received training by Israeli security experts, the very advisors to the Israeli Apartheid-like Occupation

Schwartzman added that Lanier, who has since been replaced, was quoted in the Washington Post as stating: “No experience in my life has had more of an impact on doing my job than going to Israel”.

In spite of this evidence, those attacking Long-Bailey claim that Peake’s comments were still antisemitic because there’s supposedly no evidence that Israeli military personnel trained US law enforcement specifically to kneel on someone’s neck like the officer who killed George Floyd did.

But Palestinians living in the occupied territories have themselves witnessed Israeli military personnel using this very tactic. Palestinian activist and co-founder of the International Solidarity Movement Neta Golan, for instance, said:

When I saw the picture of killer cop Derek Chauvin murdering George Floyd by leaning in on his neck with his knee as he cried for help and other cops watched, I remembered noticing when many Israeli soldiers began using this technique of leaning in on our chest and necks when we were protesting in the West Bank sometime in 2006.

Palestinian athlete Mohammad Alqadi, meanwhile, posted four separate images on Twitter of Israeli soldiers using the exact technique used on Floyd of restraining someone by pinning their neck or head to the ground with their knee:

Crazy how the same thing happens in Palestine but the world chooses to ignore it pic.twitter.com/7wddf9tUYb

While the exact training US forces received remains unknown, Golan states, “it is clear that [Israeli forces] share these methods when they train police forces abroad in ‘crowd control’ in the US and other countries including Sudan and Brazil.”

Another episode in the ridiculous antisemitism saga

Clearly, Long-Bailey was sacked without a shred of good cause. And the episode perfectly demonstrates just how lacking in scruples the orchestrators of the antisemitism smear campaign continue to be. Even, it seems, after these forces succeeded in destroying Corbyn’s chances of becoming prime minister, they now want to keep it up in order to root out any last remaining vestiges of his era as party leader from frontline British politics.

Long-Bailey, however, has also herself to blame. Like Corbyn, she made the fatal error of thinking one can appease these forces. By acting as if this transparent smear campaign was somehow being waged in good faith, rather than as a cynical political weapon to silence those who engage in legitimate criticism of Israel’s ongoing crimes, she conferred on it a veneer of credibility that it didn’t deserve.

‘Nothing whatever to do with antisemitism’

As Jewish academic Norman Finkelstein (a son of Holocaust survivors whose entire extended family was exterminated in Nazi death camps) told The Canary in an exclusive interview last year:

They could simply have said: ‘We don’t think this campaign is being waged in good faith, there is another agenda, it’s a political agenda, it has nothing whatever to do with antisemitism.

We are now witnessing yet another case of figures from the Labour left being too deferential to the Blairite faction that Starmer represents. This is completely wrongheaded given that this conniving, neoliberal-lite cabal spent practically the entire duration of Corbyn’s leadership stabbing him in the back and trying to depose him as leader – with the antisemitism smear serving as their preferred tool of choice. After all, their desire to oust Corbyn conveniently coincided with the desire of the well-funded UK Israel lobby to keep a friend of the Palestinian people out of 10 Downing Street. As Finkelstein explains, the groups associated with this lobby have a long history of falsely accusing critics of Israel of being motivated by antisemitism.

And also a sad irony

There’s another sad irony about these antisemitism accusations. The political right is forever complaining about how ‘political correctness’ has somehow meant that ‘you can’t say anything anymore’. Yet it’s the political right itself that’s created this toxic environment where a person’s political career can be swiftly destroyed on completely baseless accusations of antisemitism. So much so that people on the left live in a constant state of fear of getting defamed for voicing even the most modest criticism of Israel.

There is also a colossal element of hypocrisy. Because at the same time as the left is clubbed into submission by a hectoring Zionist lobby and its willing Tory and Labour right accomplices, rampant Islamophobia on the right goes on in an atmosphere of almost total impunity. Clearly, the climate of fear is increasingly degenerating into a dystopia in which these forces serve as judge and jury in the Court of Zionist Thoughtcrime. We live in dark times. And so the responsibility to stand up and fight back grows stronger with every passing day.