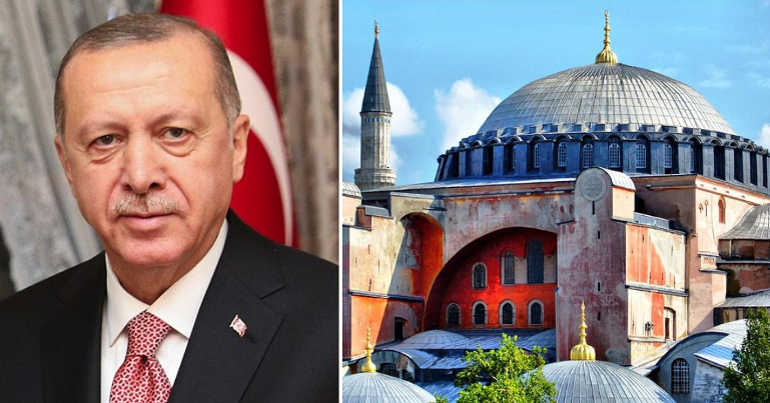 On Friday 24 July, hundreds of men joined Turkey’s fascistic president Recep Tayyip Erdoğan to pray in Istanbul’s Hagia Sophia mosque. Hagia Sophia, a UNESCO World Heritage Site, was originally a cathedral in the Byzantine Empire, built in 537AD. It was converted into a mosque in the 1400s, and became a museum in 1935.

It has now been reconverted into a mosque after eight decades. While on the surface the move doesn’t seem sinister, Erdoğan is sending another clear message to all his critics that he – and the ruling AKP government –  will continue to do what they damned well like.

EU foreign ministers “condemned” the decision. UNESCO, meanwhile, stated that it “deeply regrets” the conversion, and will review the building’s status as a World Heritage Site.

It was a calculated decision to re-open Hagia Sophia as a mosque on 24 July. On this day in 1923, the Treaty of Lausanne was signed, and the Republic of Turkey’s borders were defined. As a result, Ottoman-Greek people who had fled as refugees lost the right to return to their land. The treaty has been described as:

the first of its kind: internationally negotiated and sanctioned compulsory exchange of minorities.

The move to open Hagia Sophia on this day is surely yet another attempt to provoke Greece. Turkey continues to scramble for oil and gas in the Mediterranean, while Erdoğan has threatened:

You [Greece] had better collect yourself and know your place. If you don’t know your limits, then what Turkey would do is obvious.

Paving the way for Kurdish massacres

Despite previous promises, the Lausanne Treaty didn’t recognise a separate Kurdish state, and paved the way for the massacres and imprisonment of Kurdish people which continue up to this day.

While Erdoğan and AKP officials prayed inside Hagia Sophia, Kurdish activists and their comrades protested outside the Swiss building where the Lausanne Treaty was signed. The Swiss Democratic Kurdish Society stated:

The AKP is using religion and dirty policies as a continuation of the Lausanne Treaty on Friday, 24 July with the decision on Hagia Sophia. It’s no coincidence that the government has chosen this date, the 97th anniversary of the Treaty of Lausanne…

Meanwhile, Turkey continues to become more and more dictatorial, and has drafted a new social media bill. Bianet reported that:

This bill will ensure that if companies want to operate in Turkey, they’ll have to do it under Erdoğan’s terms, or face whatever legal consequences the state feels is necessary. Turkey is already known as “the world’s biggest jailer of professional journalists”. And there are tens of thousands of political prisoners, with increasing numbers being imprisoned for “insulting the president“.

It’s terrifying to see how Turkey is spiralling into a dictatorship, and it can be difficult to imagine what we can do in solidarity with those being repressed. But there is one clear action we can take: boycott Turkey. The Turkish state needs our valuable tourist money for its ailing economy. We have a choice where we go on holiday, or which airline companies we fly with. We can make a difference.