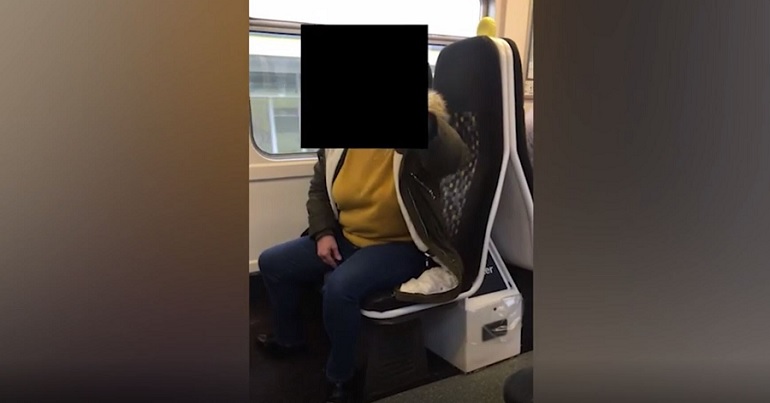 The abuse by a fellow passenger of a disabled woman and her young sister over face masks may have shocked some people. But in reality, the attacks disabled people have faced during the coronavirus (Covid-19) pandemic is peak 2020. Because this embedded discrimination and hate has been over a decade in the making.

As the Liverpool Echo reported:

Karolina Pakenaite, 24, who is partially blind and deaf due to Usher Syndrome, was verbally attacked after her sister Saule, 16, temporarily removed her face covering so that Karolina could read her lips as she spoke to her.

The two sisters were travelling with Karolina’s guide dog on the train from Liverpool Central to their home in Southport on Thursday, July 16.

The unnamed woman who abused them clearly didn’t believe that Karolina was disabled. She can be heard in the video below saying “you’re taking the piss”; “deafblind my arse” and “why is she [Karolina] talking to me if she’s deaf?”. This is despite the sisters explaining that Karolina lives with Usher syndrome. It is a genetic, hereditary condition that causes both hearing and sight loss. Another passenger intervened to stop the woman’s abuse:

All this is despite government guidelines making it clear that chronically ill and disabled people are exempt from wearing face masks if their impairments mean they can’t. There appears to be no guidance in England for unpaid carers. But you’d think common sense would prevail if a person needs to lipread. But Karolina and Saule’s experience is the culmination of two major issues: one related to the government’s handling of the pandemic; the other something that has been brewing for over ten years.

Firstly, there’s been a government push during the pandemic towards “personal responsibility” and “common sense“. The home secretary’s rhetoric during a Sky News interview is one example. Priti Patel said that:

The public need to think about other people as well, in terms of spreading the virus.

In other words, the Tories have been building a clear narrative: if coronavirus has a second wave, then it’s our fault for not following the rules. So it’s down to us to police each other. And anyone not following the rules is a ‘public health-traitor’. A case in point was Met Police commissioner Cressida Dick’s recent interview with LBC. She said of face masks in shops:

This has been compounded by the likes of Dominic Cummings and his rule breaking – a situation where he was exonerated despite clearly breaching the guidelines he helped create. All while young, poor, and mostly Black people have been subject to police crackdowns for having parties. Divide and conquer at its finest.

Now, the Tories have, at the last minute, made provisions for chronically ill and disabled people who can’t wear masks. On Friday 24 July, they published a ‘download and print’ face mask exemption badge. These are similar to the hidden disabilities sunflower lanyard that currently exists, which marks people with invisible impairments out as needing extra support. But as I wrote of them:

All you’re doing is giving your blessing to society and the system continuing to treat you differently. It may seem like a solution to the challenges you face. But it’s not. It is playing into a wider agenda of society leaving disabled people with a few crumbs off the dinner table. You should expect better, and must.

And as Jo said on Twitter of the new mask exemption badges:

Wore my "Lanyard of Shame" for the 1st time today. Been trying to Act Normal so far, but my breathing was just not having it & I needed to get the bus home. 😳

So, we’re left with a situation where people who aren’t wearing masks are pariahs who should be called out by the rest of us, and ostracised like modern-day witches. Karolina and Saule’s experience is a case in point. But would an exemption badge have made a difference for the two sisters? Given what’s happened to chronically ill and disabled people over the past decade, I doubt it.

I feel exhausted by having to continuously write this. Yet here we go again.

New Labour began taking a wrecking ball to the social security system during the 2000s. As David Binder wrote for the London School of Economics (LSE) blog:

Labour Party leader Tony Blair espoused a new ‘tough rhetoric’ around welfare during his leadership in order as many argue, to gain the affections of ‘Middle Britain’ and win over the tabloids.

This was seen not least in the introduction of the Work Capability Assessment (WCA) and Employment and Support Allowance (ESA), which was phased in to replace Incapacity Benefit. The idea that the welfare state encouraged a ‘something for nothing’ began then. As Binder noted, though, at the time negative public attitude about social security was aimed more at unemployed people than chronically ill and disabled. But since 2010, successive governments and the media extended this.

The Tory-led Department for Work and Pensions (DWP) has increasingly targeted chronically ill and disabled people. For example, Personal Independence Payment (PIP) is a benefit for chronically ill and disabled people. It’s supposed to help with their extra costs if they live with illnesses or impairments. But PIP has been dogged by controversy. From stealth real-terms cuts to huge rates of successful appeals, the benefit is a shambles. Also, around 12 people a day die waiting for the DWP’s decision on their PIP.

Meanwhile, the department itself is in a constant state of scandal. From destroying reports into claimant deaths to not collecting data on the mortality rate under its new benefit Universal Credit, the DWP’s reputation has been severely tarnished over recent years. Perhaps most damning in this is that claimants have repeatedly had to take the DWP to court to try and get it to admit its wrongdoing.

But accompanying this has been an increase in the mainstream media of the ‘benefit scrounger’ and ‘welfare cheat’ narrative. As Binder wrote:

The media have a very considerable role to play in influencing perceptions and constructions of those receiving welfare and benefits.

In looking at some national newspaper websites for example, it’s easy to see how those on benefits are portrayed. Indeed, on the MailOnline site rarely a day goes by without a story of an individual, couple, or family fiddling the system for ‘immense personal gain’. Such persistent and negative portrayals of a minority only serve in my view to paint a picture that essentially brands all those in receipt of benefits as ‘scroungers’, or the UK welfare system as an overwrought and broken machine in urgent need of punitive reform… Whilst the Daily Mail and others who consistently produce this sort of output will argue that they are merely reporting on a minority, such consistent scaremongering paints a picture that unquestionably is in danger of tarring all who claim benefits with the same brush as those who abuse the system

And tarred all social security claimants have been.

The wedge made up of thin end-slivers

So much so, that the chair of a UN committee said that the government and the media “have some responsibility” for society seeing disabled people as “parasites, living on social benefits… and [living on] the taxes of other people”. She said these “very, very dangerous” attitudes could “lead to violence… and if not, to killings and euthanasia”. And she urged the government to “stop” this. This was after the UN accused successive Tory-led governments of committing “grave” and “systematic” violations of chronically ill and disabled people’s human rights.

All this has culminated in hate crime rising repeatedly in the last decade. It got to the point where, in 2016, 23-year-old Brendan Mason was lynched. He lived with learning difficulties.

Others abusing chronically ill and disabled people for not wearing face masks is not the ‘thin end of the wedge’. It is the wedge. In the case of the woman abusing Karolina and Saule, she seemed to have little or no understanding or empathy with the sisters’ situation. But given what’s happened in the past decade, we shouldn’t be surprised. The concern is that the coronavirus ‘new normal’ will just exacerbate existing prejudices and hatred, as we’re already seeing. Sadly, for chronically ill and disabled people it looks like the 2020s are going to be no better than the 2010s.