Until you've drifted a mile in their tiny dinghy, don't even think about criticising the Channel crossers - Canary 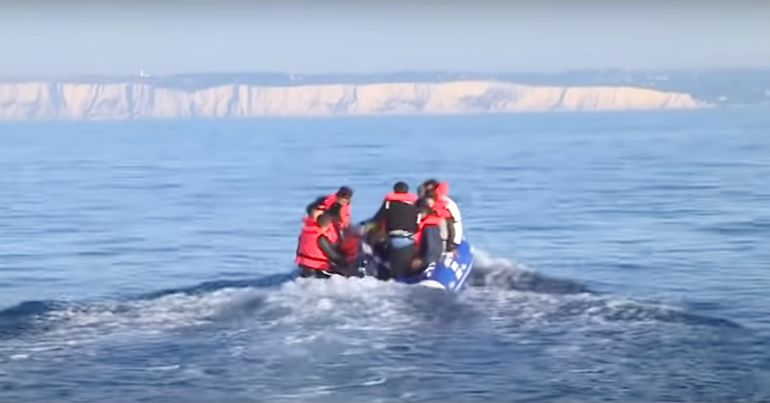 I can still remember the first bit of political graffiti I ever saw. It was in the 70s. I can’t have been more than about four or five. Daubed scruffily on a bridge in Norwich were the words: “NO MORE BOAT PEOPLE”.

Having no idea what on earth this meant, I asked my mum, who explained that it referred to people from countries such as Vietnam and Cambodia who were escaping war and trying to get into the UK. Well fair play to them I thought, dimly aware that those countries were somewhere near China and therefore a hell of a long way away. If they can make it all the way in a little boat (I suspect I’d seen some TV pictures), why would anyone want to turn them away? Mum explained that some folk thought the UK had enough people already and didn’t have room for more.

I learned much later that ‘Boat People’ was a generic term for people fleeing turmoil in south east Asia, initially by sea. Those that survived the perilous escape and made it to safe land then dispersed around the world seeking asylum as refugees. The vast majority were accepted by the US (823,000). Australia and Canada each took 137,000 and France took 96,000. The UK accepted 19,000. But for someone in Norwich with a can of paint and a heart of stone, that was still too many.

I grew up taking most of my holidays on a Norfolk Broads sailing cruiser. When I was four, this nearly ended in disaster. Later I got into dinghy racing and over the years experienced most of the (largely comical) mishaps that are a feature of the sport. I capsized; I fell off the back and had to swim after the boat as it carried on without me; I got clouted in the face by the boom; I got tangled up with a moored yacht; I got swept clean out of the boat by a 20 foot breaker. All of which was just preparatory shits and giggles for the time I was caught in a Mediterranean storm off the coast of Italy. With all the official safety boats either bolting for port or overwhelmed, I ended up getting rescued by three local fisherman. They’d put to sea for no other reason than to help out. I don’t know what would have happened if they hadn’t been there.

This rather put me off sailing so I abandoned my already increasingly tenuous quest for Olympic glory and only sailed sporadically after that. But it is of course the duty of students on their summer holidays to do stupid things. And thus it was that a few years later I found myself with a friend attempting to get from Swanage to the Isle of Wight in a sailing dinghy. We made it there and, having hauled the boat up a beach near Yarmouth before realising we couldn’t leave it unattended, we made it back. But along the way we discovered that the sea was much less placid than it had looked from the shore. The breeze stiffened throughout the afternoon. Hidden shallows kicked up chaotic waves that threatened to roll us over. I recall being concerned that we might lose the sandwiches overboard. But also that we were manifestly ill-equipped, having basically come out in our home clothes. The return leg, into the wind, seemed to go on for ever. When we finally reached Swanage again, having covered close to 40 miles, we decided to give the boat, whose best years were behind it, a belated pre-sail check and realised that the mast was just about ready to fall down.

We’d been lucky. There were just two of us, in a boat designed to accommodate two, perhaps three. When I see pictures of ten people, in a boat made for three or four, or 30 in a boat made for six, I can do nothing more than wish them calm seas, kind tides and a safe landing. The Channel is capricious and, compared to the spacious Dorset bays through which I’d careened, the straits between Dover and Calais are jam-packed with shipping.

Getting from A to B

Everything is relative. I once found myself on a sweltering Circle Line tube during the afternoon rush hour. My two kids were with me, flaked out after trailing round museums. The younger one was still of an age where leaving the house involved a substantial amount of equipment and logistical planning. At our stop, I had to pick her up, along with all the bags and, obviously, two giant balloons and shake the older one awake to walk, even though he wanted carrying too. We made it. It’s no big deal. Parents do that sort of thing all the time. But that doesn’t make it easy. However, it would have been a lot harder if I’d had no ticket, no money, nowhere to stay that night and the perpetual fear that at any moment someone could stop us in our tracks and make our efforts worthless.

In BBC TV show Race Across The World, contestants have to travel thousands of miles across numerous countries without using air travel. Their budget is the price of a one-way plane ticket. In some respects a re-enactment of gap year larks from a simpler time, the show thrives on the trials and tribulations of missed connections, tricky border crossings and culture shock. It’s not supposed to be any sort of commentary on asylum seeking or economic migration. But at a time when Brexit is raising questions over the purpose of borders and the desirability of living in other countries, it has intriguing resonances. Why do passports have so much power? Why do some passports have more power than others? What makes one country different from another and in what respects are they the same? Is travel more legitimate when it’s a leisure activity than when it’s a matter of life or death? Would we regard it as child cruelty to have six-year-old contestants on Race Across The World? Would the show be more exciting if the contestants had no passports and were chased by immigration officers, in the style of Hunted?

If you can’t empathise, don’t judge

The BBC and other broadcasters stand accused of turning this summer’s Channel crossing attempts into “a game”. While such crossings obviously increase in number at a time of year when weather conditions are most likely to be safe, there’s a depressing inevitability to the coverage. For political pundits kicking their heels while parliament is in recess, it’s something to talk about. And yes, I know, here I am joining in. But this year, more than usual, it feels like a distraction from the pressing problems of coronavirus (Covid-19) as well as the government’s various other incompetencies.

However, it was actually the BBC, in collaboration with HBO, that brought the most important depiction of a clandestine Channel crossing to our screens. The 2019 drama series Years and Years was frankly the most fucking terrifying thing I’ve ever seen on TV. Mostly because a lot of it looked like the News. And one element of its near-future scenario that came across particularly powerfully was the consequences of border crackdowns. People trapped the wrong side of an arbitrary line and forced to make impossible choices, ripe for exploitation and flirting knowingly but helplessly with disaster. If you find the news coverage of Channel crossings too trite to take seriously, come to this drama for a more realistic insight.

Currently, to apply for asylum in the UK, you have to get here first. Among a range of appallingly risky options, coming by boat seems like one of the better ones. I know it’s not something I’d do for a laugh. I doubt I’d even be capable of managing it. I had enough trouble with a Dorsetshire picnic cruise. And a single tube journey left me in bits. So the thought of making a journey of thousands of miles with small kids, culminating in running the Channel gauntlet on a glorified lilo, isn’t something I can even contemplate. As I thought about the ‘boat people’ in the 70s, so I think about the Channel crossers today: fair play and good luck to you.