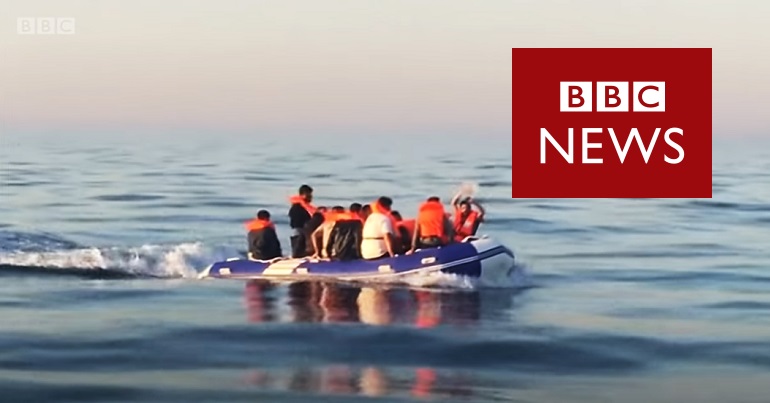 A BBC journalist managed to sum up in one tweet the broadcaster’s rancid coverage of refugees crossing the Channel. But the situation also points to a wider problem: how co-opted the media is, and how corporations co-opt politics for their own gains.

The BBC: scraping the bottom of the barrel

Both BBC and Sky News have faced criticism for their journalists’ conduct in recent days. Not least because both broadcasters have sent boats out to try and speak to the people in dinghies, in some grotesque, reality TV-like game of cat and mouse. And BBC political correspondent Chris Mason tweeted something which did nothing to dispel the notion his employer is more interested in voyeuristic trash telly than proper news.

Mason thought that using an exclamation of excitement/shock (“OOOF!”) was appropriate in the context of the refugee crisis in the channel. This context namely being the row that’s broken out between ice cream maker Ben & Jerry’s and the Home Office. It came after the former tweeted a thread critical of Priti Patel and her department. Mason tweeted the Home Office’s response to Ben & Jerry’s. And it started with the “OOOF!”:

OOOF! Home Office source: “Priti is working day&night to bring an end to these small boat crossings, which are facilitated by international criminal gangs&are of serious concern. If that means upsetting the social media team for a brand of overpriced junk food then so be it.” https://t.co/QIrfXOjZ5w

I nearly wrote ouch, but i couldn't resist a word with three Os in a row!

Mason tried to explain his “OOOF” away – saying a government spokesperson “responding in the way they chose to” “doesn’t happen anywhere near as often” as corporate criticism of politics:

Hi Bryony, a brand choosing to intervene like this is interesting, but is happening more and more often. What doesn’t happen anywhere near as often is someone speaking on behalf of the government responding in the way they chose to. Hence ‘ooof.’ Hope that helps!

No, it’s not. It’s shorthand for how rare it is for someone speaking on behalf of the government to respond so archly to a commercial critic.

But his complete lack of self-awareness shone through in another tweet:

It’s not my job to comment. I’m a reporter.

Mason is so entrenched in the Westminster bubble that he doesn’t even realise that one single “OOOF!” is comment in itself. You can almost imagine him screaming across the BBC newsroom in glee as the Home Office comment came in. Actually, you don’t need to imagine Mason wetting himself in excitement. Because he tweeted as much:

And, to be fair to the sub, it is the Home Office response that turbocharges it as a news story

War and persecution are SO yesterday’s news cycle, after all. The Home Office getting catty with an ice cream company is a far bigger story.

But Mason could have tried a better analysis. Maybe one that looked at how government communication teams are now clearly so embedded in Boris Johnson and Dominic Cummings’ far-right, dog whistle, Trumpian politics that hurling insults at an ice cream brand for pointing out facts on Twitter is the ‘new normal’. But he didn’t.

Instead, to him (and most Westminster journalists) the comms battle between the corporate capitalist government and a corporate capitalist ice cream maker is clearly more exciting than people fleeing war zones and dictatorships, risking their lives because they’re so desperate for a better life. It’s the same thing Noam Chomsky called Andrew Marr out on:

And it’s the same problem that Media Lens highlighted: the ‘five stages of mainstream journalism’:

Ben & Jerry’s: the thin end of  the corporate capitalist wedge

The political right on Twitter has weaponised Ben & Jerry’s ownership by corporate giant Unilever against the left. Yet, while the reason for amplifying this fact may be wrong, the principle is correct. Ben & Jerry’s slamming the UK government is little more than effective PR: latching onto one part of the public psyche in order to improve brand reputation.

This same, skewed position can be seen in ‘green’ cleaning product manufacturer Ecover – owned by SC Johnson, an environmentally and ethically dubious multinational. Or vegan cheese VioLife, owned by an investment firm that also invests in meat companies. And then there’s serial corporate capitalist offender Nestlé, now making vegan foods. This is part of the real story: multinational corporate capitalists co-opting ‘green’ and ‘ethical’ movements in a bid to bolster their profit margins in a rapidly-failing ecological, economic, and social system. Because some are ones which also profit from war.

It’s all a game

Mason said that the situation in the channel and the Home Office / Ben & Jerry’s war of words is “not a game”:

You’re absolutely right it’s not a game Joe. I take my reporting incredibly seriously — whereas you are happy to assume to know her intention, instincts and her motivations without any evidence to support your claims.

Sadly, he’s wrong again. Because it is a game to everyone involved.

From him getting a ‘turbocharged’ news scoop; to corporate monolith Ben & Jerry’s trying to win over left-wing consumers; to the Home Office doubling-down on decades of racist propaganda to cover up government failings – it’s all one big game of chess. But the only people who’ll ever experience checkmate in this situation are once again the poorest and most destitute in our global society. Not that journalists like Mason seem to care. And Ben & Jerry’s certainly doesn’t.

So, we’re left with a paradox that seems impossible to rectify: who do we turn to when our public service broadcaster happily treats other members of our species like cannon-fodder, and corporations are feigning concern to boost their profits? Yet both are omnipresent in our lives? We need to turn to each other. Because in this corporate capitalist dystopia, we’re the only friends we have left.