Not that you’d know from watching the mainstream media, but Israel is bombing Gaza. Again. - The Canary 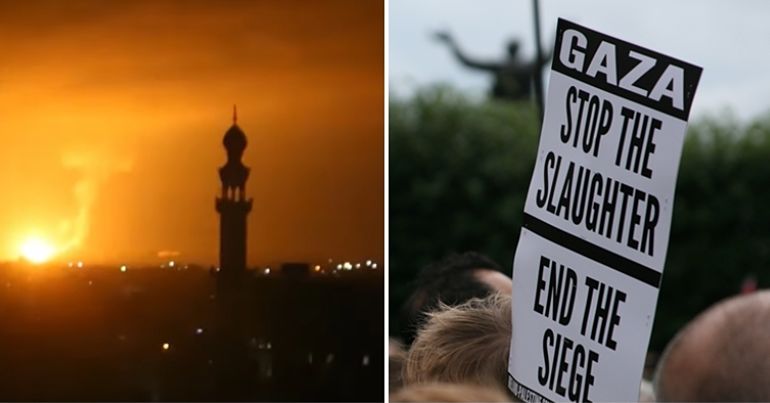 The Gaza strip has been under attack from Israel since 6 August. And it has been relentless ever since then. This militarised Israeli attack on Palestinian citizens involves the use of F-35 war planes. Israel claims its latest attack on the strip is in response to Hamas launching incendiary balloons at Israel.

But, unless you followed independent and international media, you’d hardly know this attack was happening at all. And if you read mainstream media, you could be forgiven for thinking it’s Israel that’s the victim. But it’s not. Palestinians living in impoverished conditions in Gaza are the victims. And they’re once again under attack from Israel. As silence is never an option, we need to speak up for Gaza.

Since this latest round of Israeli attacks on Gaza began, Israel has ordered the fishing zone off the Gaza coast to close. And in the open-air prison that is Gaza, its coast is a vital source of food and income for its two million population.

Additionally, Israel has also blockaded the strip and banned the entry of fuel for Gaza’s only power plant. So not only has the Palestinian territory had a major part of its food supply cut off, it’s also being starved of energy.

Reports indicate that Israel’s attack and fuel blockade have meant a major sewage treatment plant can no longer function. This has resulted in raw sewage overflowing in the strip and crossing the border into Israel:

People living in Gaza are suffering water shortages and report they can’t even return to their homes. And this is in addition to Palestinians having to deal with the coronavirus (Covid-19) pandemic. Meanwhile, the Israeli army (IDF) boasts about its efforts:

How can Twitter allow israel to openly boast about its collective punishment of Palestinian people in Gaza? https://t.co/y8EXlhDrSm

So Israel’s attack against Hamas, the political party that controls Gaza, is also an attack on the Palestinian people.

We can’t accept this any more

The mainstream analysis seems comfortable comparing Hamas’s incendiary balloons to Israel’s war planes. It gives the false impression that it’s comparing like with like. But it’s nothing like that. Sending explosive balloons cannot remotely be compared to the power of F-35 jet fighters dropping explosives on a civilian population – a civilian population that was already so desperately in need.

The mainstream media message is that Israel is responding to Hamas and not that this is an aggressive and heavily militarised attack against Palestinian citizens.

Israel bombed Gaza last night for the 14th day in a row, in the middle of a global pandemic.

Still no coverage from RTE, BBC and the world media.

They don’t want to show the world what’s going on, so you have to. Please retweet.#GazaUnderAttack #PalestinianLivesMatter pic.twitter.com/KlhVAfNsq9

Mainstream media is going to do what it does. So that means we need to be even more outspoken than ever in expressing our rage at this latest despicable attack on Gaza by Israel. And we need to speak up for the people of Gaza like we’ve never done before. Because silence, just as before, has never been an option.