The Tories are manipulating Marcus Rashford in the extreme - Canary 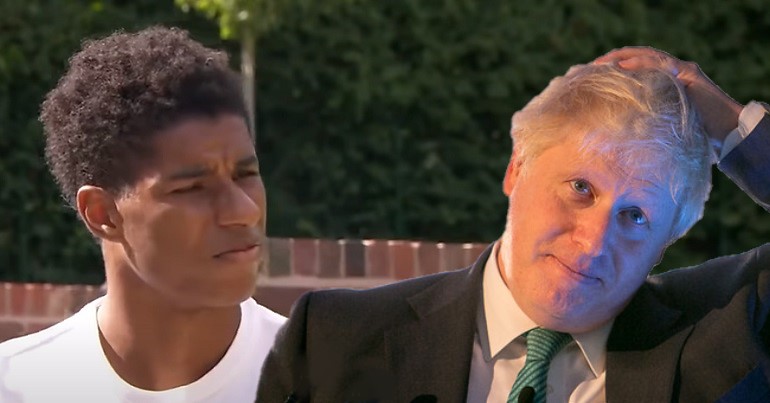 Marcus Rashford appears to have won a victory over the Tory government. This is because it seems to have climbed down over the issue of free school meals during the holidays. But the reality is that the government has done no such thing. What it’s actually done is just trolled millions of poverty-stricken children.

A Tory climb down…?

BBC News reported that after Rashford’s persistent campaign to end child food poverty, the government has changed it’s mind on feeding children during school holidays. Previously, the Tories refused to repeat the policy they put in place during the summer. This was to provide families of children entitled to free school meals with vouchers during the holidays.

But now, things have changed. BBC News reported that:

a £170m ring-fenced fund will be distributed through councils until the end of March, with at least 80% earmarked for help with food and bills.

The holiday food and activities programme will be expanded with a £210m investment to cover Easter, summer and Christmas in 2021.

On top of that, there will be a £16m cash boost for the nation’s food banks.

I don’t want to be the bearer of bad news and cynicism. But we need to take a step back from the headline. And we need to break the reality of these pledges down.

First, the £170m for food and bills. Or rather, the 80% of that figure that the government is saying will be for those things. Let’s say the money will help 1.7 million children, as Rashford hopes. The amount per child would be 66p a day.

I’m not sure exactly what the Tories think 66p a day will buy. But for example, it is around 30% of the value of the free school meals voucher the government gave out during the first lockdown. By that Tory logic, children must be eating 60% less than they did seven months ago. Or, it will pay for 0.5% of the average weekly food bill for a typical family of my size. Moreover, it is unclear if the money will even get to the families that need it.

Previously, the government gave councils £63m for a similar scheme. But the Trussell Trust said that the availability of local support was a “postcode lottery”.

The Tories have also said they will spend £220m on the Holiday Activities and Food programme in 2021. Bear in mind they were probably going to expand this scheme, anyway. Because it has done so in previous years.

Meanwhile, the £16m for foodbanks is not exactly a positive move. It allows the government to wash its hands of responsibility for food poverty. Reliance on foodbanks also plays into the Tories long term plan for the welfare state; as I previously wrote, they want charities to do the job the government used to do via social security. And moreover, as the Guardian wrote, food banks actually benefit big business:

The government is essentially subsidising firms to waste food, then redistribute it to boost their reputations. It’s grotesque

But there’s a much bigger problem with the Tories’ response to Rashford’s campaign. And it is the long term impact.

Coming back to bite us

There’s no such thing as a ‘something for nothing’ pledge when it comes to the Tories. The political choice of austerity is a prime example of that. So, this latest splurge of spending will probably come back to bite the poorest people in the UK. The Mirror reported that chancellor Rishi Sunak has already “hinted” VAT could go up to pay for the mess. City AM, meanwhile, said a national insurance hike could be on the cards. The London Economic thought that Sunak may in future cut social security.

The point being that whether it’s VAT, national insurance, or social security – all these things would hit poor people the hardest.

Rashford’s campaign is clearly well-meaning and to be respected. But it is ultimately problematic. Because ‘thanking‘ Boris Johnson is a misplaced act – when actually, the changes he’s making are almost insulting to the millions of people in poverty.

Moreover, there will be hell to pay in the future – just for a few scraps from the government table now. No one is denying children need support right now. But with the Tories, there’s going to be a massive sting in the tail. It’s going to be a long, hard winter for millions of children across the country. But the future and what it holds looks even bleaker than that.