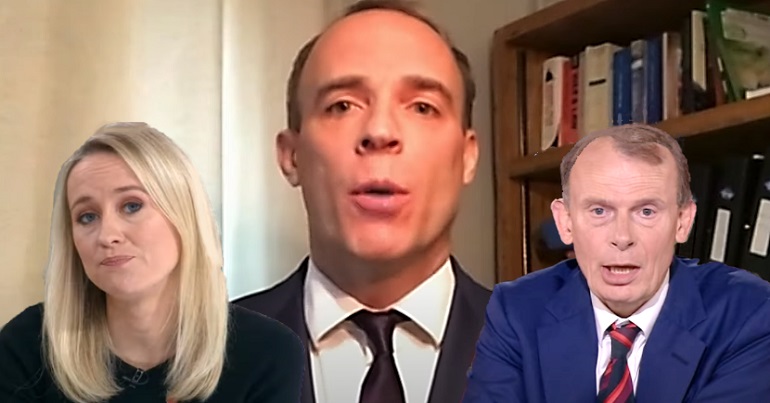 Dominic Raab didn’t exactly have a good morning on Sunday 8 November. Because he repeatedly fell apart across both the Andrew Marr Show and Sophy Ridge on Sunday.

First, the foreign secretary was on Ridge. The host brought the subject of the US election up. The reportedly outgoing president Donald Trump has wildly claimed that there has been “fraud” and ‘corruption’ around mail-in (postal) voting. This has been debunked as essentially nonsense at present. Trump has also called for states to stop counting votes. So, Ridge probed Raab about this.

Do you think that all votes should be counted in a democratic election?

The answer would seem fairly obvious to many. Unless, of course, you’re the Tory foreign secretary. Raab swerved the question, saying:

Look, I’m not here to get drawn into… what is a different system in the US

But Ridge wouldn’t let it go. She interrupted him, saying:

Sorry, the question is do you think all votes should be counted in a democratic election? I find it astonishing there’s not an answer to that.

Prepare to be even more astonished then, Ridge – because Raab still tried not to answer:

Dominic Raab – I'm not going to get drawn into that…#Ridge – Astonishing you can't answer that#Marr pic.twitter.com/HALiqsRflS

He finally caved in, though. But only by a bit:

Dominic Raab finally says that "in principle, yes of course" all votes should be counted in a democratic election.

Only answered after repeated questioning on #Ridge, & declined to comment directly on US election.

He added US poll was "far closer than pundits expected"#Ridge

Then Marr must have been ‘astonished’ too. Because Raab also refused to directly answer his question on the predicted president elect Joe Biden and Brexit.

Representatives of civil society groups have said that the actions of the Government are ‘jeopardising’ the Good Friday Agreement and the functioning of the devolved administration at Stormont.

The groups… have described the actions of the Government as ‘contravening’ international law and ‘undermining’ the provisions of the Protocol in terms relating to the non-diminution of rights and equality protections.

The point being that Biden has already come out and said he would protect the agreement.

So, Marr took Raab to task over this. The host said:

[Biden’s] comment about the Good Friday Agreement not being a casualty of Brexit was actually only two months ago, so he is very focused on this. And the new incoming team have been very, very clear, they want to see changes in the Internal Market Bill. And I’m asking you one more time, to give me a clear answer as to whether the government has heard that message and is prepared to move in any way on the Internal Market Bill. Yes or no?

Of course Raab tried to swerve the question:

#Marr asks Foreign Secretary Dominic Raab if the government is prepared to move on the Internal Market Bill to achieve a post-Brexit trade deal with the US#Brexit https://t.co/8orhw8QnnR pic.twitter.com/9nZrYPp1Sl

But, of course, there’s good reason for Raab to dodge the questions from Ridge and Marr.

Some commentators think that a Biden presidency could be tricky for the Tories over Brexit. WalesOnline noted that he:

opposed Brexit and, due to his Irish heritage, has expressed concern about its potential impact on Ireland’s economy and Northern Ireland’s security.

And he has described Prime Minister Boris Johnson as ‘a physical and emotional clone’ of Trump.

So, the challenge for Johnson is that his whole 2019 election was based on a “no ifs, no buts” Brexit and to just ‘get it done’. Now, with it looking like Biden will try and force a compromise, the Tories will be in an uncomfortable position: betray the voters they scooped up with the promise of Brexit no matter what? Or give in to concessions from Biden – and in doing so, demonstrate they haven’t really ‘taken back control’ of anything?

Raab’s clusterfucking was a prime example of the panic and potential chaos the Biden presidency may cause. It’s going to be an interesting few months.