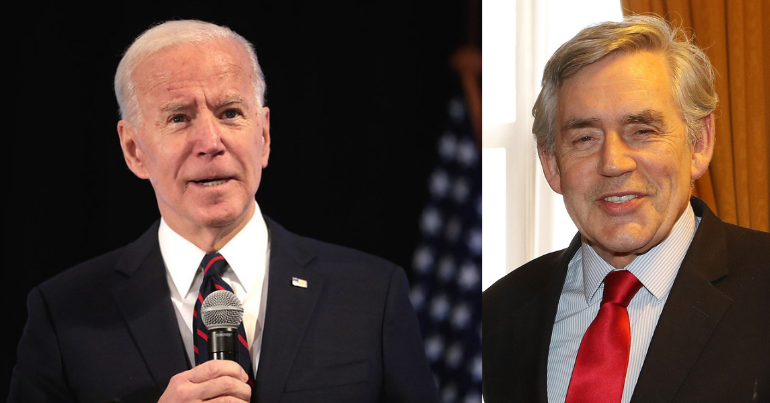 Gordon Brown has said he believes Joe Biden to be a friend of the UK, bringing to mind the role both of them played in the Iraq war.

Discussing Biden on Radio 4, Brown said there could be a trade deal between the US and UK in the long-term. He went on to discuss Biden cooperating internationally as he works on security, the environment and health.

Joe Biden has always been a great friend of Great Britain.

I think he wants to be a friend of Britain. I think he plans, from what I know, to come to Britain within the first six months of becoming president, probably to the G7.

How UK-US trade relations will progress remains to be seen. But Brown’s comments renew scrutiny of both men’s involvement in the Iraq war.

More than a vote for war

In 2002, Joe Biden was chair of the US Senate Committee on Foreign Relations. As chair, he selected witnesses for the senate hearings that would eventually lead to the backing of Bush’s invasion.

Many of these witnesses advocated for the war. They claimed Iraq had weapons of mass destruction and that Al-Qaeda was allowed free movement around the country.

As is well known now, both of these claims were untrue. Despite this, the committee voted to authorise invading Iraq on the back of these hearings.

At the time, Biden said:

I do not believe this is a rush to war… I believe it is a march to peace and security.

‘War could not be justified’

As chancellor, Gordon Brown was responsible for signing off on the financing of the Iraq war. He expressed sorrow over the deaths it caused, but has yet to admit any guilt.

He claimed in his 2017 book that the US did not inform the UK government of reports Saddam Hussein had no weapons of mass destruction. Brown then wrote the invasion “cannot now be seen as a proportionate response” with that knowledge.

Dr Hans Blix, the UN weapons inspector, oversaw hundreds of inspections from 2002 to 2003 in Iraq. His team found no evidence of weapons of mass destruction. In 2010, he said that more inspections might have stopped the UK’s involvement in the war.

A war to answer for

Despite the half a million deaths and economic devastation, neither Biden or Brown have accepted guilt for the Iraq war.

As Biden enters the White House, any ‘friendship’ between the UK and the US must acknowledge their mutual mistakes.