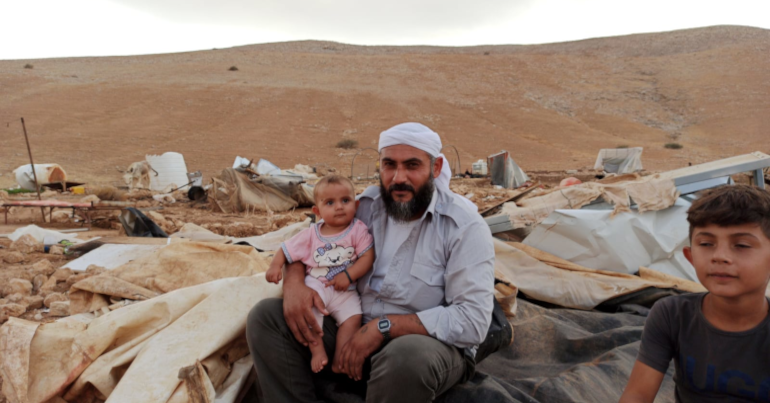 British company JCB’s equipment was used in Israel’s demolition of an entire Bedouin village last week. The demolition was reportedly Israel’s single largest in a decade.

While all eyes were on the US election, Israeli jeeps and bulldozers rolled into the Humsa al Bqai’a Bedouin community in the northern Jordan Valley. They demolished homes and animal shelters, making over 70 Palestinians homeless. 41 children were left without shelter.

This video from Israeli human rights group B’Tselem shows the destruction they left behind them:

“They only gave us ten minutes”

The Israeli military came with jeeps and bulldozers. They ordered us to empty our homes, they only gave us ten minutes. Obviously that’s not long enough to empty even a single tent. We didn’t have time too remove everything. They demolished it with all our things inside.

The Canary contacted both JCB and Volvo asking for comment on the use of their equipment in this military operation. JCB did not reply by the time of publication. Meanwhile, Volvo sent the following response:

Volvo products have a long life span, and may be rented out and change ownership many times during their life cycle and we are limited in our possibilities to influence how and where our products will be used throughout their entire life cycle by different end users. We have policies and processes in place with the aim to ensure that we comply with applicable laws and regulations in all countries where we pursue business operations, including sanctions. We have no own operations in the region and our products are sold and serviced by local business partners.

According to research group Who Profits, Israeli company Mayer’s Cars and Trucks is the sole importer of Volvo products into Israel. Volvo already has an agreement with Mayer’s Cars and Trucks that its buses should not be used to transport prisoners. So it seems fair to ask why the company could not make the same stipulation that its equipment is not used in demolitions.

The Canary reported in October:

JCB supplies its equipment in Israel through its Israeli dealer Comasco. Campaigners are calling on JCB to stop supplying equipment to Israeli forces via Comasco.

JCB is currently facing an investigation after a UK government body found that a complaint against it by UK charity Lawyers for Palestinian Human Rights (LPHR) is “material and substantiated”.

The complaint was made to the UK National Contact Point (UK NCP). It claims that JCB’s supply of construction equipment used in the demolition of Palestinian homes and property by Israeli forces is in breach of the Organisation for Economic Co-operation and Development’s (OECD) guidelines on human rights. It is trying to force JCB to ensure that its equipment is not used in home demolitions.

Solidarity campaigners in Sheffield held a demonstration outside a JCB dealership to protest against JCB’s role in the demolitions in Humsa al Bqai’a:

Activists visit TC Harrison's JCB site in the north of #England to protest its role in the illegal demolition of the #Palestinian village of Hamza. #StopDemolitions @MEmonitor3 #BDS pic.twitter.com/JjR3psUWVk

One of the demonstrators told The Canary:

I read in disbelief and anger last week of the brutal and inhumane destruction of a Palestinian village in the northern Jordan Valley. 41 children left traumatised and homeless, adding to the countless thousands whose lives have been changed forever by Israel’s systematic policy of creeping annexation.

In Sheffield we are determined that JCB should not get away with its direct involvement in Israel’s war crimes. That’s why yesterday activists visited the main dealership for JCB on the outskirts of Sheffield and left our personal message for the managers of TC Harrison JCB: Shame on you JCB!

Meanwhile, a coalition of campaigners is calling on the National Society for the Prevention of Cruelty to Children (NSPCC) to stop accepting JCB’s money until the company takes steps to make sure its equipment doesn’t make any more children homeless. According to a press release by the UK branch of the Israeli Committee Against House Demolitions:

…[we] argue that the charity’s proclaimed values are rooted in the UN Convention on the Rights of the Child. Such values are universal, not selective, and apply to all children, not just to British children: Palestinian children matter too

One thing’s for sure: over the last year JCB has been finding itself more and more in the spotlight because of the way its equipment is used in Palestine. It’s time for the company to bow to public pressure and ensure that JCB machines aren’t used to make any more Palestinians homeless.