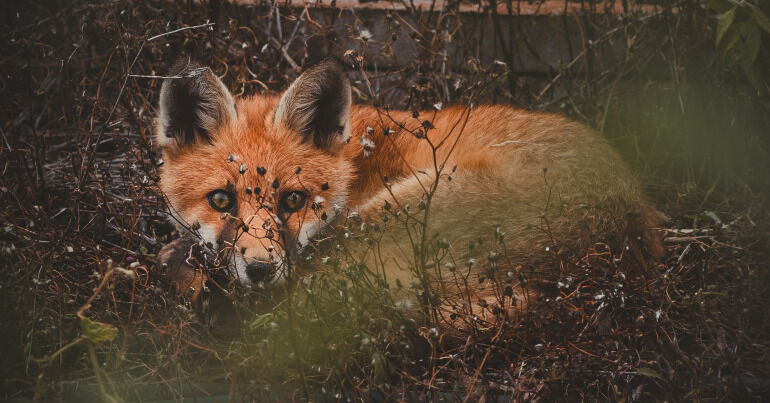 2021 is business as usual for fox hunters, who continue to evade prosecution when blatantly breaking the law. Footage given to The Canary shows a terrified fox cub being chased by dozens of hounds, while men in their red coats, belonging to the Cotswold Hunt, direct the dogs.

The harrowing footage, taken by Three Counties Hunt Saboteurs, was filmed on 21 October 2020. But on 8 January 2021, the activists learned from the police that the Crown Prosecution Service (CPS) was refusing to take any action against the hunt.

The video shows a tiny fox being chased, while the whipper-in – a person who assists the main huntsman – watches. One activist screams “leave it!” repeatedly at the hounds. She then shouts to the whipper-in: “why didn’t you stop them? You saw they were on a fox.” Shortly after, activists say the huntsman directs the hounds to continue chasing the terrified cub:

The video is eight minutes long, but The Canary has cut it in order to protect the identities of activists in the footage. At the end of the film, a man is seen carrying what looks like the dead fox cub. He continues to look behind him, apparently checking whether the hunt saboteurs have caught him red-handed:

The Canary spoke to Lynn Sawyer from Three Counties Hunt Saboteurs. She said:

On top of this, according to Sawyer, the Cotswold Hunt illegally blocked a badger sett that morning. She said the hunt continues to:

breach both the Hunting Act and the Badger Act by blocking and digging out badger setts on an almost daily basis.

A bottomless pit when policing activists…

Sawyer knows that hunts across the country continue to get away with murder, but she had hoped the footage would have at least brought the men to court. Despite the evidence, the CPS just wasn’t interested. Sawyer compared it with the seemingly limitless money that the state has to prosecute animal rights and environmental activists:

The burden of proof appears to be much higher in hunting cases than it would be for any other case, and I speak as an experienced activist who has seen vast state resources directed at those fighting against environmental desecration and for animal rights.

Sawyer is more lenient on Gloucestershire police, who she says are:

doing what they can with the resources they have, and have certainly had an impact re wildlife crime in the area. But the bottom line is that without us being in the field many more wild beings would be hunted, dug out and killed.

The police might have limited resources when it comes to prosecuting hunters. But when it comes to the policing of animal rights and environmental activists, there seems to be a bottomless pit of state money to hand, as well as police officers available to arrest people. In October 2020, the mainstream media reported that the Metropolitan Police spent a massive £37m on policing Extinction Rebellion protests. Imagine if just a fraction of that money was spent on policing the hundreds of hunts that take place across the country every month.

…and another bottomless pit for prosecuting activists

While we see both fox hunters and stag hunters continue to evade prosecution, it’s worth comparing how animal rights activists have historically been cracked down upon heavily by the state. Take the campaign to close down animal testing company Huntington Life Sciences (HLS), for example. In 2014, HLS kept over 70,000 animals. According to campaigners:

HLS will test anything for anybody. They carry out experiments which involve poisoning animals with household products, pesticides, drugs, herbicides, food colourings and additives, sweeteners and genetically modified organisms. Every three minutes an animal dies inside Huntingdon totalling 500 innocent lives every single day.

The state used seemingly limitless resources to prosecute the campaigners over a number of years, in what one activist described as:

a coordinated campaign against animal rights activists in an effort to silence dissent.

Activists were imprisoned for almost 70 years between them for being part of the campaign. Corporate Watch reported that for many of the activists:

the only evidence presented was involvement in lawful campaigning against the company and association with those involved in direct action.

Compare this to the prosecution of hunters. Campaigners and hunt saboteurs have documented numerous acts of illegal hunting. Not many cases make it as far as court, and when they do, hunters are usually found not guilty. As The Canary previously reported, the Hunting Act is not fit for purpose, with hunters managing to evade prosecution by getting around the law.

One recent case against hunters has actually gone to court, but was adjourned on 11 January. Two men, of the Quorn Hunt, face charges of illegally hunting a fox with hounds. It will be a pleasant surprise if they’re found guilty.

In nearly every case, the hunters claim that they were ‘trail hunting’. This is where hounds supposedly follow an artificial scent instead of a real fox. But as we have previously explained, trail hunting is used as a cover-up for illegal hunting.

Enough is enough. We need to really put pressure on landowners and the government to permanently ban all hunting for good.

The Canary contacted both Gloucestershire police and the CPS for comment, but had received no reply by the time of publication.