We need to grieve all women murdered by men. Not just those deemed worthy by the mainstream media. - The Canary 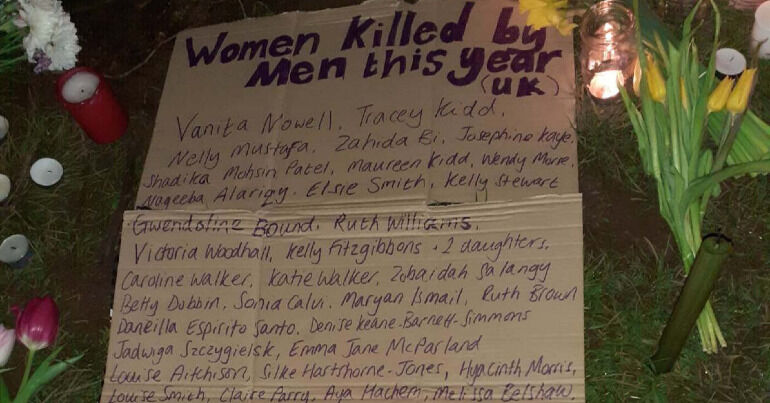 Women across the UK continue to grieve the loss of Sarah Everard, murdered while she was walking home. Her alleged attacker is a Metropolitan police officer: a cog in a system that claims to keep women safe, but in reality does very little to protect us.

While all of us know Sarah’s name, how many know the names of Bibaa Henry and Nicole Smallman? Or of Wenjing Xu? Or Geetika Goyal and Blessing Olusegun? How many news headlines have they taken up? And why aren’t we just as outraged by their murders?

Sadly, Sarah’s death is a stark reminder that not only do we live in a misogynist society, but that we also live in a white supremacist one. You see, Bibaa, Nicole, Wenjing, Geetika, and Blessing were Women of Colour. It’s perhaps no surprise, then, that mainstream media coverage didn’t get to anywhere near the same levels. After all, these news outlets are racially-biased and are essential in upholding a racist society. As I’ve reported before, the experience of the white person has always been the default front page story to cover, while narratives of People of Colour are too often dismissed.

But it’s not just the media. As white women, we should also reflect on why, if we see a story about a Black woman who was murdered, we are saddened, but we continue to go about our daily lives. But the murder which sparked our nationwide unrest was that of a white woman.

Please don’t get my intention wrong: I don’t mean to insult Sarah’s memory in any way, or disrespect those grieving for her. Nor do I want to take anything away from the women who have faced police repression while protesting on the streets these last few days. I would like us to collectively reflect upon how, when we say nothing about the murders of Black women, we are complicit in upholding a racist society. I would like us to think about how our white silence is, essentially, life-threatening to Women of Colour.

Sisters Bibaa Henry and Nicole Smallman had been celebrating Bibaa’s birthday when they were stabbed to death in a park in Wembley in June 2020. But the news went largely unnoticed by the UK population. Their family even had to search for the women themselves after receiving no immediate help from the Metropolitan Police. Their mother, Mina Smallman, said of the police:

I knew instantly why they didn’t care.

They didn’t care because they looked at my daughter’s address and thought they knew who she was. A black woman who lives on a council estate.

Mina was told that when the police did finally come, officers took selfies of themselves with Bibaa and Nicole’s dead bodies. Yes, that’s right: they took selfies. Mina said:

Those police officers dehumanised our children.

There were no nationwide vigils for Bibaa and Nicole. And I can’t help but suspect that if it were white women who had been dehumanised by the police in such a way, there would have been nationwide outcry. Surely it would have made every newspaper’s front page.

16-year-old Wenjing Xu was murdered on 5 March, just two days after Sarah went missing. She was stabbed to death near her family’s Chinese takeaway. One man has been arrested for her murder, and for the attempted murder of another man. Wenjing was studying for her GCSEs and was described as a “very gentle soul”.

29-year-old Geetika was stabbed and then left to die on a street by a man in Leicester on 3 March, on the same day that Sarah disappeared.

It’s telling of the society we live in that Wenjing and Geetika received next-to-no mainstream media headlines or even mentions on social media, even though they were murdered in the same week as Sarah.

25-year-old Bennylyn Burke, from Kingswood, Bristol, was reported missing from her home, along with her two children, on 1 March. A 50-year-old man has been charged with the murder of both Bennylyn and her two-year-old daughter Jellica, while her other daughter was found alive inside the arrested man’s home. It’s thought that the man murdered Bennylyn using a hammer.

21-year-old Blessing was found dead on a beach in Bexhill on 18 September 2020. No-one has been charged with her murder. Sussex police has treated the case as “unexplained” but not suspicious, with a postmortem stating that she died by drowning. But her family want more answers, and a petition is being circulated, calling for justice for Blessing. Joshua Mellody, who started the petition, argued:

Her death IS suspicious and we will not let it be left “unexplained”. Something happened that night that left blessing lifeless on the beach. The police need to investigate it. The system needs to do better. #justiceforblessing #blacklivesmatter #justiceforwomen

The mainstream media is now making comparisons between Sarah and Blessing, as they were both caught on CCTV, walking at night. But it has taken Sarah’s death for many of us to learn about Blessing for the first time.

Say all of their names

We need to keep the momentum going on the streets, outraged by the death of every single woman, and not just the women singled out by the mainstream media as worthy of us mourning. Someone on Twitter summed this up beautifully:

So, as we raise our voices, not just against men’s violence, but against police and state violence towards women, we need to be shouting the names of all the women we have lost. Sarah, Geetika, Blessing, Wenjing, Bennylyn, Bibaa, Nicole. The list goes on and on. Let’s grieve all of their deaths with outrage, and let’s make sure that we continue to fight for systemic change.

Featured image via a Bristol activist, with permission